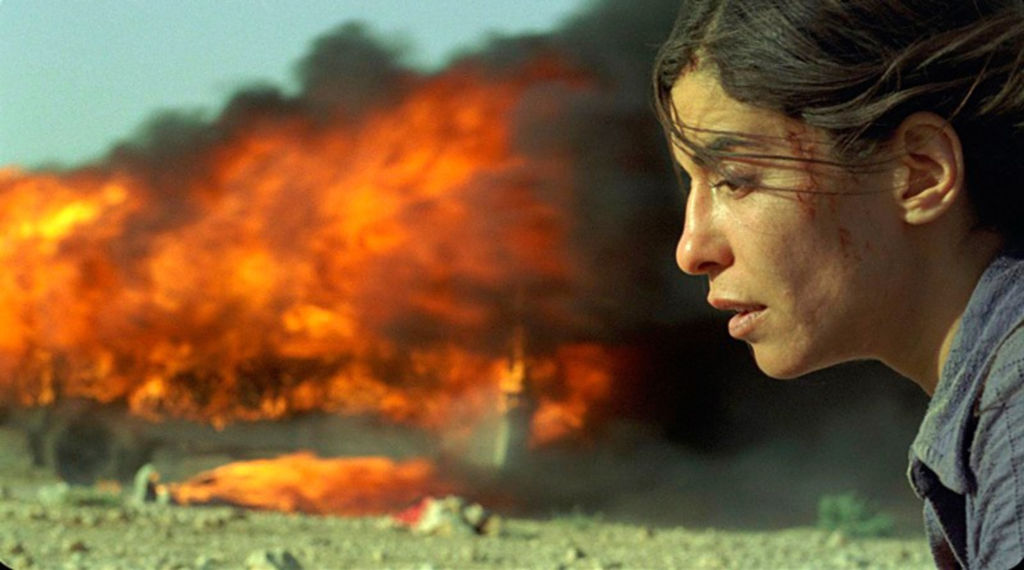 Incendies, the new French-Canadian/Lebanese film by director Denis Villeneuve (Maelstrom, Polytechnique), is the sort of work that can give a critic fits. There is more than enough “right” with it to make it worthy of recommendation, even though it has certain significant problems as well. But it’s also different enough and accomplished enough that it merits much more than a mere shrug or even a few words of tepid approbation.

The title is French for “fires,” and the film (adapted from the play by Wajdi Mouawad) is indeed about the slow-burn aftermath of a life lived as scorched earth and the toll taken on loved ones.

The movie is framed by the reading of the last will and testament of legal secretary Nawal Marwan (Lubna Azabal) before her surviving children, twins Simon (Maxim Gaudette) and Jeanne (Mélissa Désormeaux-Poulin).

A distant, depressive woman, Nawal had a very secret life that she scrupulously concealed from her children upon the family’s emigration to Canada, and the will is a body blow to the already reeling siblings. They must return to their mother’s homeland (a never-named Middle Eastern country, but clearly Lebanon) and locate both the father they believed to be dead and the brother they never knew existed. From this point on, the Marwan children’s present-day journey is quite gracefully intercut with flashbacks depicting the complicated, bitter life of Nawal.

But it’s here that Incendies runs aground, despite its best intentions. Not specifying the national locale of Nawal’s war and casting Nawal and her family as Christians in the midst of Muslim persecution (and vice versa) have the deeply frustrating effect of taking these subjects, described through Nawal’s plight, out of their historical context. This polarity is never reconciled. At the center of Villeneuve’s film is a passionate, brave and, at times, even crazy individual. But the attempt to make her plight universal simply feels fraudulent. Given the specifics of Christian-Muslim antagonisms in Lebanon — a history given more overall context in the recent animated documentary Waltz With Bashir — Incendies risks playing into the vague fatalism that too often pervades Western perceptions of the Middle East. (“It will always be a mess over there …”)

Villeneuve and ace cinematographer André Turpin provide exceptional formal construction, making it easy to see why Incendies was one of last year’s Best Foreign Language Oscar nominees. In particular, the visual contrast between the golden expanses of natural light in Lebanon and the gray, geometrical brutalism of Montreal offers a solid objective correlative for two ways of life. But this perspective also points to one of the complications that makes Incendies a film of ideas, but not wholly successful ones.

The acting is uniformly excellent, and Désormeaux-Poulin does a fine job as a professor of abstract mathematics who’s struggling to solve her familial dilemma like a proof. But the film’s overall point of view is filtered through Jeanne and Simon, which becomes a problem when a film about political strife in the Arab world assumes and conforms to middle-class Western expectations.

Nothing exemplifies this more than Incendies‘ final-reel twist, an affectation that says very little about the price exacted for dignity in wartime and much more about Hollywood moviemaking expectations, and the pampered classes’ inability to imagine real cruelty.