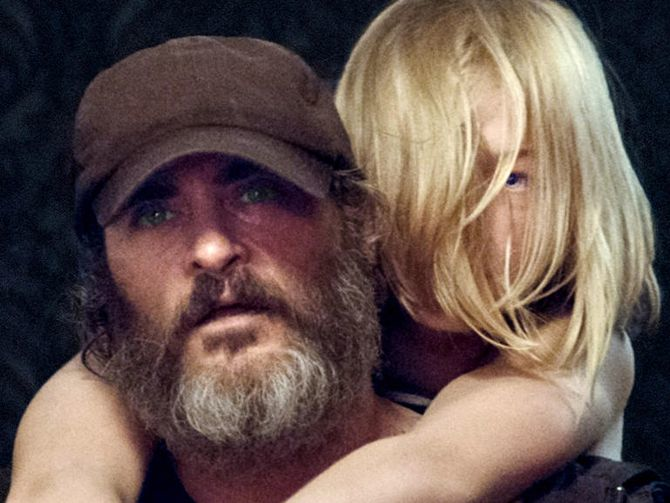 Director Lynne Ramsay locks us in terrifying solitary confinement with PTSD-addled vet Joe (Joaquin Phoenix) in the lean, violent stunner You Were Never Really Here. It’s been six years since Ramsay’s divisive bad-kid nightmare We Need to Talk About Kevin, and the writer-director is still embracing the dark side. She won Best Screenplay at last year’s Cannes and Phoenix took home the top acting prize, but You Were Never Really Here will likely prove too edgy and angry for mainstream American awards like the Oscars.

The order of the day is terror and uncertainty — two things that can immediately alienate an audience from the narrative. The hulking, disheveled figure before us seems disconnected from reality. Joe is some sort of assassin for hire, but what kind of work is he doing? Our ability to decipher some basics about the story is further complicated by a severe lack of dialogue and strange flashes that appear to be untethered to the story at hand.

On top of that, Ramsay is hellbent on cutting out key scenes of conflict in the very moment of anxiety. This, of course, creates even more anxiety, and we’re left to decipher just exactly what happened as much as were struggle to figure out Joe’s motivations. But the disorientation that editor Joe Bini so cleverly plays with (and composer Jonny Greenwood so persuasively magnifies) isn’t one-dimensional — although if you were to nutshell the script afterwards, it might seem that way. No, that disorientation is the key strategy for understanding Joe’s character. Speaking of surprises, did I mention that the sweetest, most well-drawn relationship in the movie is the one between Joe and his elderly mother (Judith Roberts)?

If you’re frustrated by the lack of plot summary I’ve divulged in this review, so be it. And please stay away from the trailer too. It’s absolutely for your own good, because the strength of You Were Never Really here lies in its ability to surprise, which comes directly from experiencing a cruel, cruel world the way a severely traumatized man sees it. It’s how Joe makes sense of his reality that says the most about human fragility.

You Were Never Really Here is in Kansas City-area theaters now.