In The Red: Chief Medical Officers discuss the reality of COVID; fears for the region 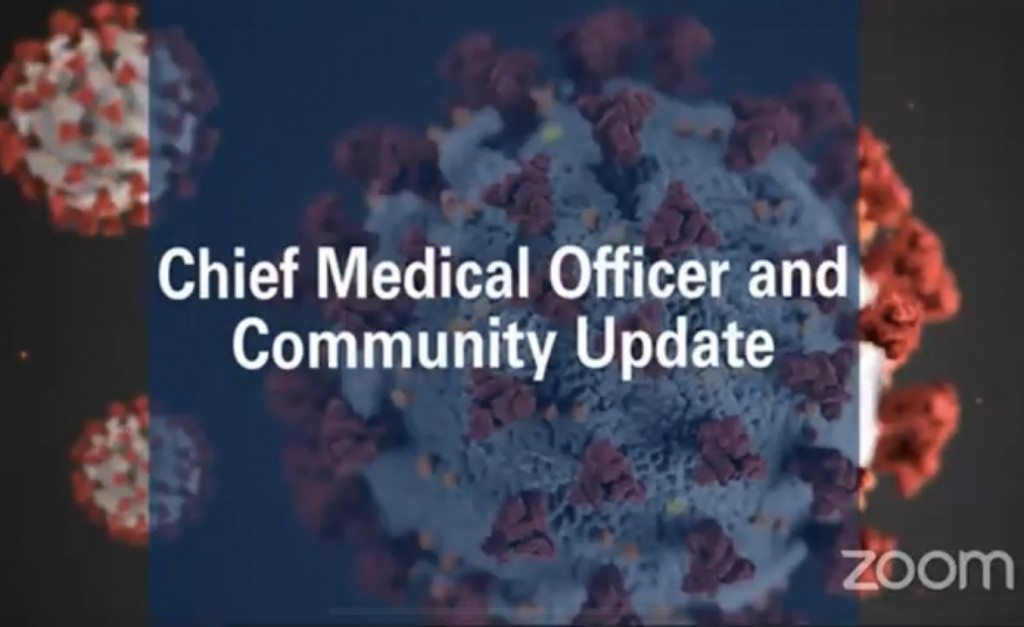 In an online panel held by the Kansas City Chamber of Commerce yesterday, the region’s chief medical officers came together to discuss where the Kansas City area finds itself as it continues to navigate the COVID-19 crisis. Both Kansas and Missouri have entered the red zone, exceeding the infected population’s required rate of staying under 10%. Today, Kansas is at 16%, and Missouri is at 13.4%, joining hotspots like Florida and Georgia. Doctors felt it their responsibility to educate the community on how to slow the spread of the virus before numbers reach new staggering heights that hospitals and front-line workers are fearful they are incapable of handling.

Dr. Steven Stites, CMO at The University of Kansas Health System, who moderated the panel, began by informing viewers of the massive issue the Kansas City community faces as a whole, using the term COWS — COVID Weariness Syndrome. Those who have not been directly affected by the virus feel that strict mask-wearing policies, social distancing, and proper hygiene are not as important as they once were. However, Dr. Stites and other CMO discussed how the “pillars of infection prevention” are more important now than ever before.

Dr. Radhu Adiga, CMO at Liberty Hospital, spoke about how children ages ten plus can spread the virus at the same rate as adults, and that it is older children and young adults who are often super spreaders. Dr. Jim Stewart, CMO at North Kansas City Hospital, added that he has continued to see proof that COVID-19 can have devastating effects on individuals, no matter how healthy. Dr. Radhu feels there is a higher risk of infection at schools and community gatherings than at hospitals because the medical staff takes all possible precautions in treating patients.

Dr. Mark Steele, CMO at Truman Medical Center, works with underserved populations and has seen how the virus disproportionately affects minorities. Dr. Ahmad Batrash, CMO at the KC VA Hospital, works directly with Veterans, many of whom struggle with mental health issues. With an increase in COVID infection by  6.5 % for veterans, COVID has contributed a rise in suicide rates, said Dr. Batrash. He spoke on the importance of checking in with patients when it comes to their mental health during this difficult time.

For Dr. Larry Botts, CMO at Advent Health Shawnee Mission Medical Center, the long term effects COVID has caused for patients related to their heart, lungs, and brain has stood out for him. However, the most significant concern is that they will see a surge that overwhelms the system, with the highest volume of COVID patients happening over the last six weeks at a continuously steady rate. 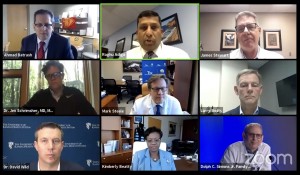 Dr. David Wild, VP of the performance improvement at KU, is worried by the misleading story census numbers offer. Though these numbers appear stable, citizens need to realize that this happens because new patients are being admitted at a similar rate that treated patients are being discharged. The daily number rise of new patients is higher now than any other point in the pandemic. Back in April, an average of six COVID patients were being admitted a day, while eight to eleven are being admitted today. With the volume of hospitalization increasing, Dr. Wild is fearful the greater Kansas City area is nearing a breaking point.

Dr. Jennifer Schrimsher, CMO at Lawrence Memorial Hospital, spoke about how Lawrence has been viewed “as a microcosm of the pandemic at large.” At the beginning of the pandemic, numbers in Douglas County stayed low until bars were reopened, making it clear that the rise was a direct result of this decision. After closing them again, KU students returned to campus for the semester, and numbers rose once again. This did not come as a surprise to Dr. Schrimsher, as there was intentional mass testing required for the student body. 2% were infected on first returning to campus, which spread between students and the community. “KU students are a burden of disease,” said Schrimsher, but are also “an integral part of our community.” The community has come together to do what they can to stop the spread, with contact tracing being implemented and 99% compliance in mask wearing on campus.

Metropolitan Community College is in phase two of their four-phase reopening plan, requiring all remote learning unless functions must be completed on-site. MCC Chancellor, Dr. Kimberly Beatty, said that those who have to return to campus for learning must do so through appointments at their enrollment centers. Safety precautions such as a single entrance, temperature checks, badging, and sanitation schedules have been implemented.

The fear of the virus has affected the education system for all ages of students. Dr. Kenny Southwick, Executive Director of Cooperating School Districts of Greater Kansas City, who represents thirty-one school districts, said, “COVID is not a school problem, but a problem that has been thrust on all our schools.” However, it remains educators’ main priority to keep the community safe while providing top education. Because little guidance was given from the federal or local government, decisions on how to best navigate the school year varied from district to district. While some fully face to face made possible because of families who have chosen to go virtual, others are going completely virtual. Dr. Southwick said that to keep schools open at the end of that day, there needs to be a higher level of community responsibility. Community members must do their part to slow the virus’s spread by social distancing and masking up, so schools don’t find themselves in the same situation as last spring.

The panel finished by answering questions from reporters. Asking if people need to isolate if one is wearing a mask but closer than six feet to another person, Dr. Adiga stated the individual is definitely at high risk, even with a mask on. When asked about how to approach greater consistency with citizens wearing masks, mayor and CEO of the Unified Government of Wyandotte County and Kansas City Kansas, David Alvey, stated that he feels it is the job of political leaders to educate themselves so they can better inform the public of the importance of taking the pandemic seriously. When asked if employers should allow employees to return to work after quarantining, Dr. Wild responded that usually eleven days after the initial signs of symptoms, workers should be safe to return to work so long as they have been without fever or any other symptoms for at least three days. This situation gets difficult when making this judgment based on swab tests, which have shown to yield positive results for up to 90 days after the first positive test.

The panel continued to stress that hospitals are the safest place to be right now because medical workers have learned that infection can best be controlled by maintaining social distancing, mask-wearing, and sanitation. If citizens follow this same level of caution, the Kansas City area can curb the new virus infection high CMO fear is just around the corner. Mayor Alvey closed by saying that citizens need to ask themselves, “who among my loved ones, my customers, my colleagues, my coworkers, neighbors, who am I willing to expose to the virus?” It is the community’s responsibility to follow safety protocol and do their part.