Families that once fled the Kansas City school district are staying put. But it’s on their terms. 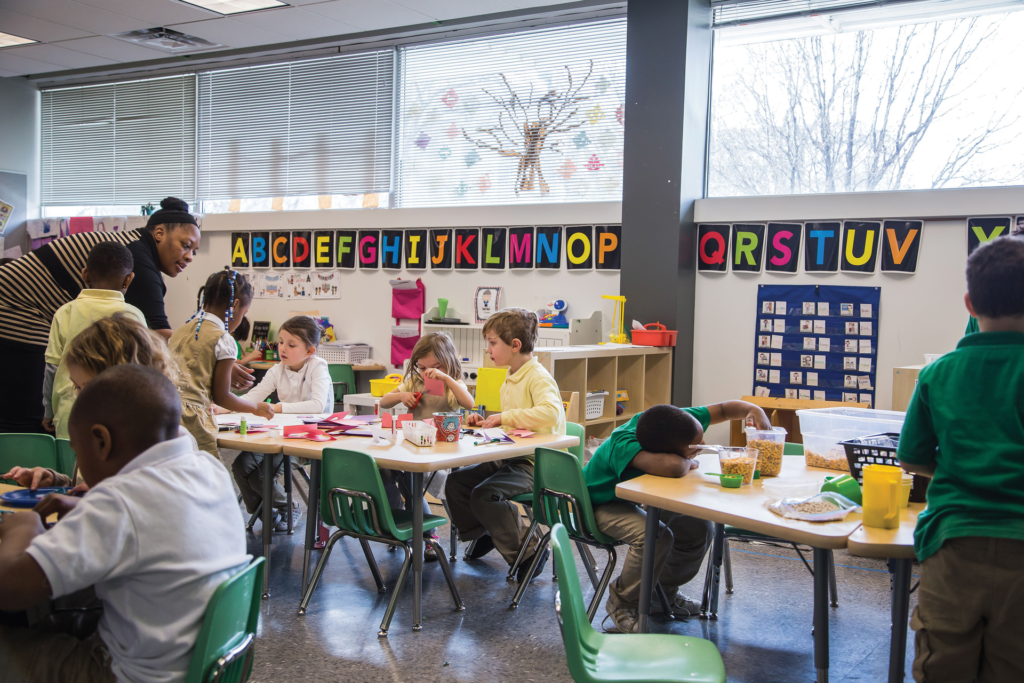 It’s a complicated story. White families did not leave all at once. Some waited until the 1970s, when the buses started rolling. Others departed when a white state senator led an effort to break off a piece of the district and attach to the Independence school district. The secession may sound like something that happened when Nixon or Reagan was president. It was 2007.

In the end, white flight proved unstoppable. By 2010, the year the district closed almost half its schools, total enrollment had fallen to a quarter of what it was in the 1960s.

What remained is a high concentration of poverty and students of color. Today, the district is 57 percent black and 28 percent Latino. The district qualifies for a federal program that provides free meals to every student.

In Waldo, parents and community members lobbied the district to reopen an elementary school. Give us a school, the neighborhood said, and we’ll send our kids. Families kept the promise. Now in its fifth year, Hale Cook Elementary School is operating at capacity, with a student body that’s 63 percent white.

New charter schools are also attracting families that might have moved to Johnson County once the kids were ready for kindergarten. Crossroads Charter Schools runs three schools inside the downtown loop. Citizens of the World Kansas City leases a building near the corner of Broadway and Armour boulevards.

Citizens of the World opened in 2016 to students entering kindergarten and first grade. Today about 225 students attend the school, which will to continue to expand as its initial classes advance in grade level.

One third of Citizens of the World’s students are white, which may not sound like much. But at most Kansas City Public Schools, whites are in a distinct minority; they represent less than 10 percent of the total enrollment. Some charter schools that operate in the district are even more intensely segregated.

Citizens of the World’s diversity is not an accident. School officials set goals for different racial categories and try to keep the number of students who receive free and reduced-priced lunches at 50 percent, which is more in line with the state average than Kansas City Public Schools.

Citizens of the World is part of a trend in K-12 education known as “diverse by design.” These schools use geographic preference areas and other tools to build student populations that are racially, culturally, and socioeconomically diverse.

In urban education, though, “diversity” is a ticklish concept — a goal that seems to be achieved only when white professionals feel comfortable putting their kids in the schools. 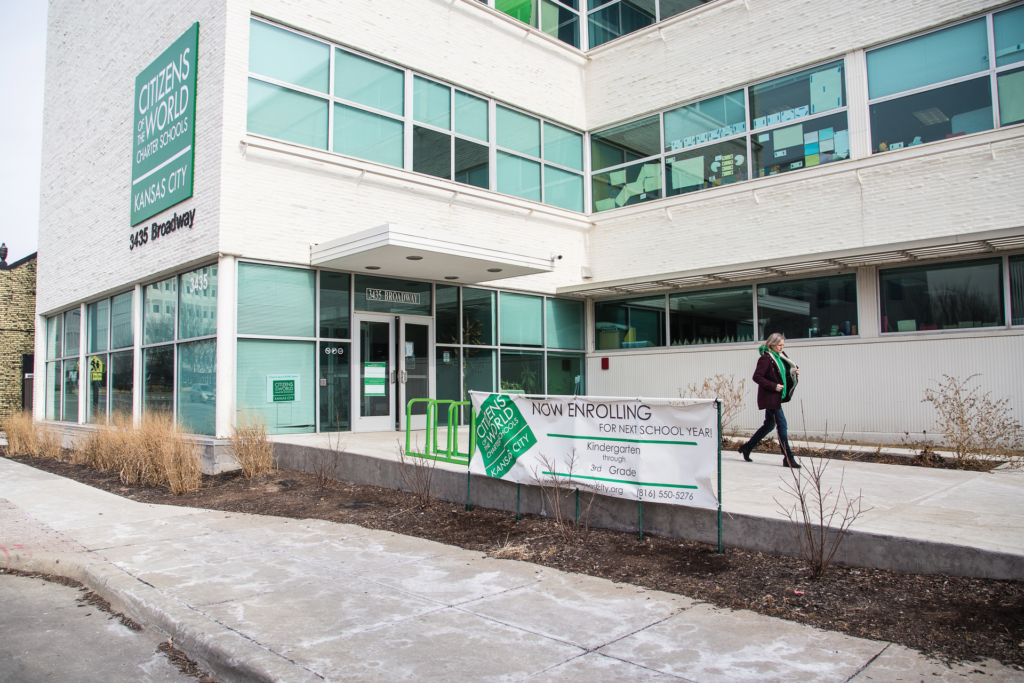 The parents and community members who led the effort to open Citizens of the World, a charter school in the heart of midtown, organized in 2013. They called their group the Midtown Community School Initiative.

The initiative began with a small group of families. The Kansas City school district was at a low point. A few years after the district closed 29 schools because of declining enrollment, the state withdrew its accreditation. (The district currently operates with provisional accreditation.)

The organizers decided to create a new charter school. They put forth their vision in a request for proposals sent to potential school operators. “Our neighborhoods are unique in that it’s common for a $300,000 home to be on the same block as a low-income apartment complex,” the request said. “Our neighbors are waiters and lawyers, university professors and college students, disabled veterans and corporate executives.”

Lawyers and professors may live in midtown, but few send their kids to Faxon or Longfellow, its two district elementary schools. The request for proposals lamented the “lack of viable school options” in the immediate area, leading to the “annual exodus of young, middle-class families.”

So how does one create a viable option for professionals with school-age children? Boundaries.

The Midtown Community School Initiative proposed a geographic preference area: Union Station on the north, State Line on the west, Brush Creek on the south and 71 Highway on the east.

Most of the people who live in this footprint are white. As it happened, the job of managing the school went to a national network of charter schools that promotes its success in attracting white families.

Citizens of the World Charter Schools is based in Los Angeles. The network opened its first school in Hollywood in 2010 and now operates six schools in L.A., New York, and Kansas City.

The “reflecting community diversity” page on the website for Citizens of the World Los Angeles uses colorful pie charts to present the demographics of its three schools. The charts show white students make up at least 45 percent of the enrollment at each school.

A plurality of white students is uncommon in the Los Angeles Unified School District, where the schools operate. At L.A.’s traditional public schools, white students represent just 9.8 percent of the total enrollment. The vast majority are Latino.

The organizers of what came to be known as Citizens of the World Kansas City do not shy away from the question of race. Andrew Johnson, a co-founder of the Midtown Community School Initiative, acknowledged the “collective failure of white culture to embrace black citizens into full citizenship” in a 2015 op-ed in The Kansas City Star. Johnson wrote the column after the Kansas City school district and Académie Lafayette, the popular French immersion charter school in Brookside, broke off negotiations to open a high school.

Johnson included some personal history in the op-ed. He described how his father’s family moved just outside the Kansas City district once busing began. “Right or wrong, that was their reality, and my inheritance,” he wrote.

By the time Citizens of the World Kansas City applied to the state for a charter, the organizers redrew the boundaries of the geographic preference area. The new map pushed deeper into the city’s black neighborhoods. The eastern boundary is now Prospect Avenue. Luke Norris, a South Hyde Park parent and founding chair of the school’s board of directors, says families in the area are 45 percent white and 45 percent African-American.

Diversity, Norris says, is a core value at Citizens of the World. “Diversity for us has been a very founding principle of everything that we do, really with the goal being that students have an opportunity to interact from, but also understand, how other students learn and do that in a diverse environment,” he says. The school also promotes its commitment to personalized instruction and other forward-thinking approaches.

Its application to the state indicates that school officials anticipated holding a lottery for seats. But now in its second year, Citizens of the World is not operating with a waitlist. As a result, students who live in the Kansas City school district but outside the geographic preference may enroll.

Without a boundary to design the diversity, the school isn’t hitting its targets. School officials can’t set quotas based on race. But they have set goals for the applicant pool. 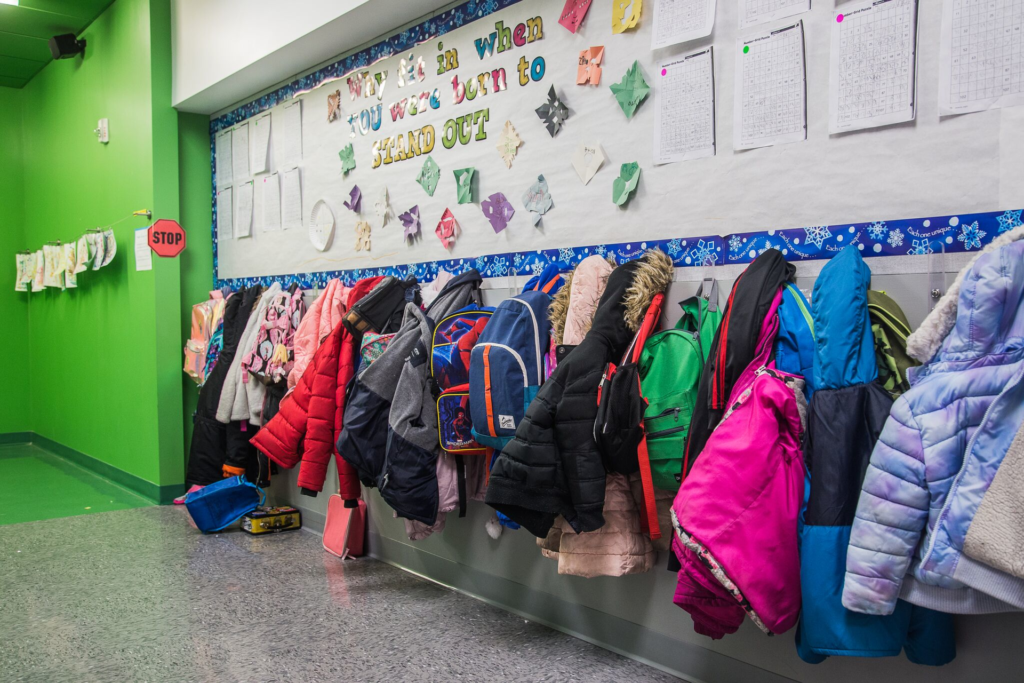 Citizens of the World school provided The Pitch with diversity statistics. The school is 49 percent black, 33 percent white, 8 percent Latino, 9 percent mixed race and 1 percent Asian/Pacific islander. The document indicates the enrollment of black students is running slightly above the target (42–48 percent), while the Latino population is falling below (12–18 percent.) In response, the school expanded the size of its board of directors and asked a Latino executive at Truman Medical Center to fill one of the seats.

Managing the diversity is a continuous process. School officials say they are mindful of their demographics when they make decisions about facilities, field trips, and other aspects of the school.

“It has to be the first priority in every single decision every day,” Kristin Droege, the school’s executive director, says. “There’s no neat answer to it. It just can’t ever be less important than anything.”

The Kansas City school district closed Hale Cook Elementary in 2009. The effort to re-open the building at 73rd Street and Pennsylvania Avenue began at a Ward Parkway Homes Association meeting.

“The primary problem we saw was an empty school building in our neighborhood,” says Sarah Darmitzel, a founding board member of the Friends of Hale Cook.

In 2012, Friends of Hale Cook prepared a feasibility study and presented it to the district. Hale Cook, the study said, was an opportunity to capture families who had given up on the district. Blunt in places, the 74-page study noted the “record low” number of white students attending district schools and “escalating numbers” of students who receive free and reduced-price lunches.

Friends of Hale Cook worked with three different superintendents before the district agreed to re-open the school. Boundaries for the neighborhood school extend east of Troost but not too far.

An initial cohort of kindergartners and first graders met at Hartman Elementary School while Hale Cook was being renovated. The building reopened in 2014. Today, the building offers grades K-5, with a sixth grade planned for next year.

Darmitzel says it’s been surreal to watch the process grow from a seed of an idea. A mother of three, she’s now a Hale Cook parent. Her eldest is a first grader at the school.

The rebooted Hale Cook drew criticism that families in Brookside and Waldo had created an enclave for themselves. Supporters of the effort say the district benefits from the boost in enrollment as well as an infusion of social capital.

District officials talk about Hale Cook as a success story.

Hale Cook was open by the time Mark Bedell became the superintendent of Kansas City Public Schools in 2016. Bedell says he is proud of the effort of the parents and community members to create a strong neighborhood school.

“What they said they were going to do, they actually delivered on,” he says. “They followed through on it. To this day, they are still supporting those efforts.”

A group called Uniting at Southwest is calling for a full rebrand of the Brookside landmark, promising innovation. The organizers emphasize the “problem-based learning” approach the new high school will take. Students will learn by doing rather than shuffle from lecture to lecture.

A hip curriculum is not the only new idea. United by Southwest’s organizers also have thoughts about what the enrollment should look like. Diversity by design is one of the school’s guiding pillars. “We know we want a diverse high school,” says Phyllis Williams, a Uniting at Southwest spokeswoman.

Additionally, the organizers want a level of autonomy from the district that Friends of Hale Cook had not sought.

District officials see in Uniting at Southwest an effort to build a moat. In late January, Bedell spoke at a meeting of the Waldo Tower Homes Association. He encouraged United at Southwest’s supporters to build a case that reopening the school would be good for the district as a whole and not just the people who live near it. “It needs to very inclusive, whatever we decide to do over here,” he said.

Bedell addressed a mostly white audience. One man who spoke at the meeting said he lived near Southwest High School. A Uniting at Southwest supporter, he shared his observation that the high school went downhill after they “bussed in the thugs from Westport.”

Bedell thanked the man for his comments and moved on.