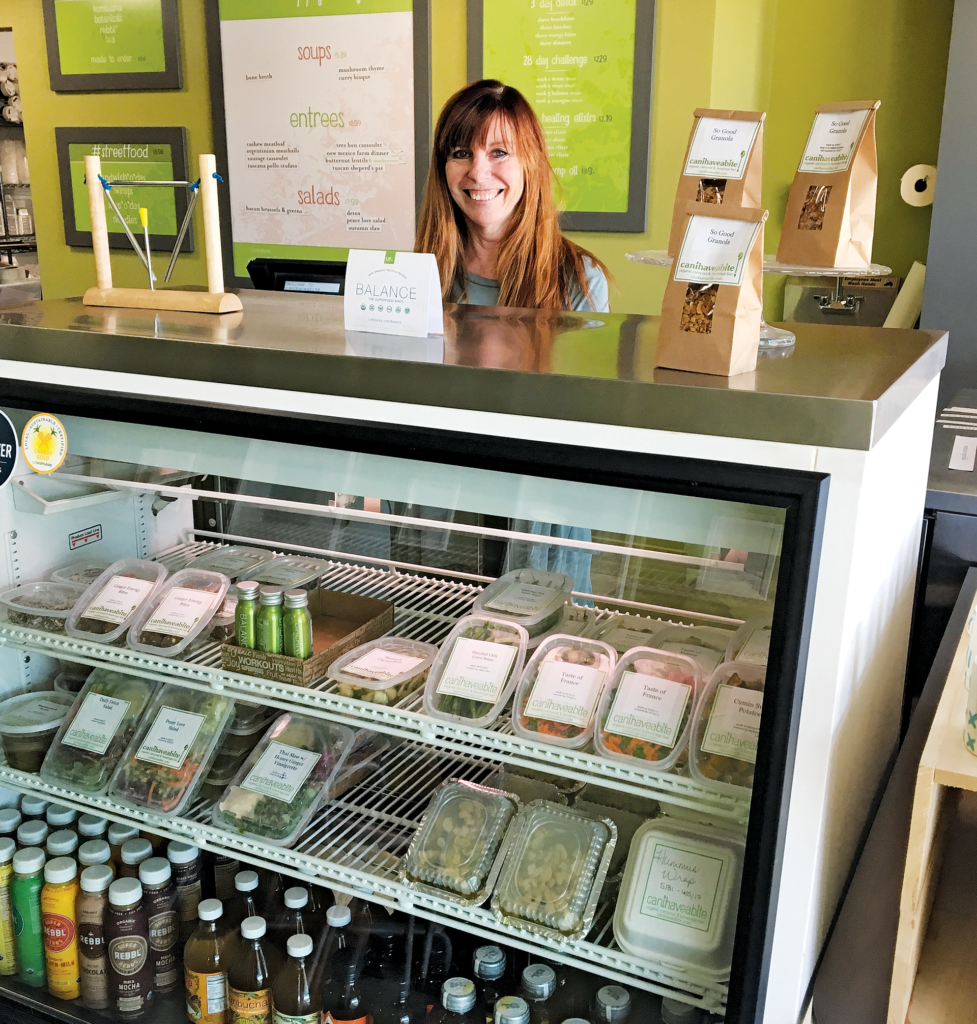 Kathy Hale’s new restaurant in Brookside has been a long time coming. I first heard whisperings about its opening sometime last year — though Hale, a well-known chef with an established clientele, had already been selling her healthy grab-and-go meals for some time on a made-to-order basis. In March, her brick-and-mortar location finally opened its doors, serving organic entrées, salads, sides and soups.

When I stop by one steamy June afternoon, my energy reserves have been absorbed by the great solar sponge of our stifling Midwestern heat. Upon entering I feel immediately refreshed by the small space’s mint-green and orange walls, though the blast of commercial air conditioning doesn’t hurt. Neither does Hale’s seemingly boundless energy. She mixes up a fizzy beverage she calls a “cocktail without the booze,” a combination of fizzy water and blackberry-flavored balsamic from the Tasteful Olive. It tastes savory and refreshing, the kind of thing I’d want to share with someone.

Indeed, the restaurant’s name, Canihaveabite, echoes what I say to my husband whenever he’s devouring something delicious but is contractually obligated to split with me, until death do us part. It also highlights Hale’s philosophy on food: Just because something is good for you doesn’t mean others shouldn’t covet it.

“Food can taste fantastic even if it’s healthy,” she tells me, as we get comfortable at a table in the sunny café. “It’s all about the taste.”

Hale’s ever-changing menu showcases her versions of familiar flavors: a vegan lasagna, a cashew meatloaf, Paleo chicken soup, meatball sandwiches. For summer, she’s planning to add a smoked-chicken wrap, as well as bento boxes that contain all the makings of a complete meal. The premade items are primarily intended for carryout; Hale tells me some people stock up on frozen entrées a month at a time, supplementing with fresh salads and sides each week. Counter service, similar to that at a coffee shop, is also available for anyone who wants to dine in.

“Eating healthy should be easy,” she says. “We’re all busy, and it’s hard to find the time to eat good food.”

Hale’s definition of good food involves high-quality, organic ingredients. She sources as much as she can locally: Her bread is from Gabrianna, a local French bakery, and she stocks her shelves with kombucha from Lawrence’s Kanbucha, and Balance Superfood Shots from Roeland Park. When I ask her which area farms she uses, she rattles off a long list: Stony Crest Urban Farm provides peppers, greens, herbs, tomatoes and squash; kale, chard and mint come from Woodland City KC; WoodMood Garden grows her sweet potatoes, collard greens and asparagus; and City Bitty Farm provides her beautiful micro greens. She gets beef and chicken from Chapman Creek Cattle Company and David’s Pasture, respectively.

“We should know the story behind our food,” she says. “It’s all about how it’s grown. Think seasonally, and look at the food before the calories or the labels.”

With Hale’s seemingly intuitive knack for combining flavors, it’s easy for her diners to put the food first. I take home a dish that layers organic red lentils, butternut squash, celery, Anaheim peppers, onions, rainbow-chard stems and garlic, topped with cashews and chipotle-infused olive oil. I also pick up a side of cumin-roasted sweet potatoes. The potatoes are seasoned just enough to enhance their flavor, not overpower it, and after a quick 15 minutes in the oven, the squash dish is light and mildly spicy, with the cashews providing a pleasant crunch.

On another visit, I try the cashew meatloaf, which comes loaded with Chapman Creek’s grass-fed beef, mashed mushrooms, carrots, celery and onions, dressed with Dijon-cashew cream sauce. It’s savory and filling, and it’s so popular with Hale’s regulars, they call ahead to make sure it’s available. Dialing her up might be the closest Hale’s customers get to making a chore out of healthy eating — and that ease is exactly what Hale always had in mind.