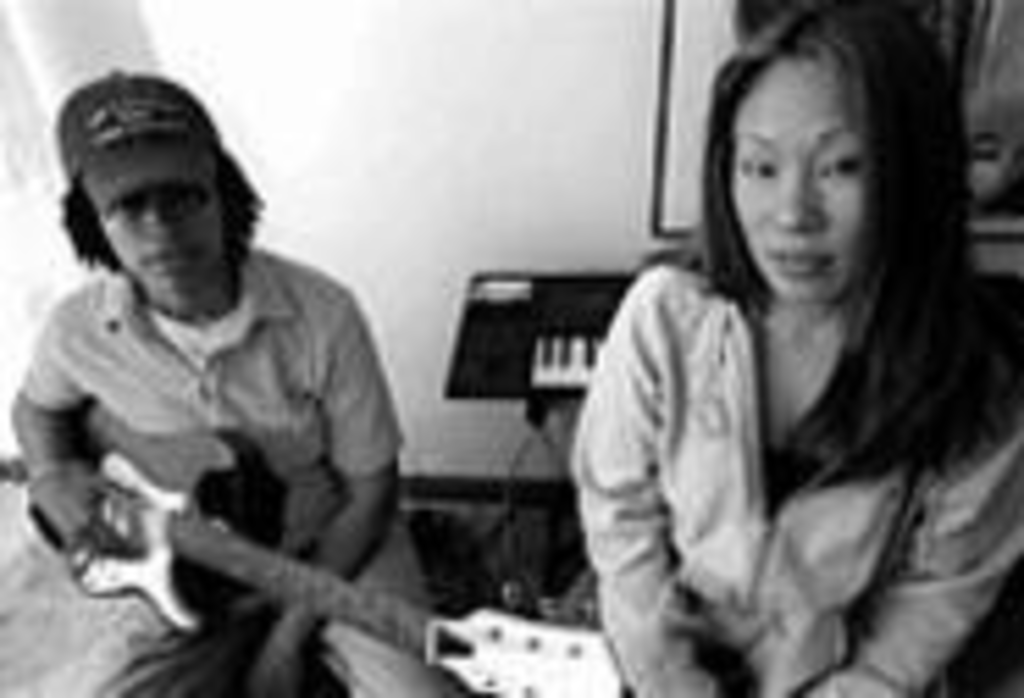 It’s two nights before the Wild Flowers open for the British duo Floetry at the Epicurean: Phase II club at 85th Street and Troost. Ten blocks up the road from that venue, Kate Hightshoe and Somilia Smith rehearse in a nondescript studio that reeks of fresh paint. It’s so newly renovated that the general contractors answer the bell and open the door. In one of the few rooms that’s completed, Smith, who is fighting a slight cold, plucks her guitar, searching for the right key. Hightshoe, who is playing the keyboards, conserves her voice as she quietly hums over a haunting melody.

The practice isn’t intense, but neither are Hightshoe and Smith, who both use variations of their government names as their monikers. The two laid-back women, who prefer to be called Katie Shu and Somilia Rabee, are extremely reserved. But they liven up when the conversation turns to their music.

“We are serious about pursuing a career in the music industry,” Shu says. “However, it’s been extremely difficult to convince people how serious we really are about our music.”

The duo might have trouble persuading others about its commitment and dedication, but that’s because the doubters don’t know how much the Wild Flowers have already sacrificed. Shu, 28, is a classically trained musician with a bachelor’s degree in oboe performance. Last semester, she abandoned her goal of obtaining a second degree in music composition.

“I just quit,” she says. “It was one of the hardest decisions I’ve ever made, but I couldn’t handle school anymore, because the schedule conflicted so strongly with our agenda for the Wild Flowers.”

In March, Rabee, 27, left her job at a shelter for abused and neglected children.

“We have totally dedicated ourselves to our music career,” the self-taught guitarist explains. “Creating music is our full-time job.”

Well, maybe not. Shu started an independent landscaping business and hired Rabee to supplement their income.

“It’s backbreaking work, but it’s cool,” Shu says. “I worked for several different landscaping companies while I was getting my undergraduate degree.”

In between planting bulbs, digging up shrubs and spreading mulch, Shu and Rabee get their hustle on full-sway. Using guerrilla-style marketing and promotional tactics, the two musicians have hit the streets and pushed more than a thousand copies of their well-produced, three-song demo CD, Blossom.

“The response has been way better than we expected,” says Shu, who has subbed with the Kansas City Symphony. “Once we get our music into people’s hands, they generally feel what we are trying to do and have good things to say.”

The pair has already written several albums’ worth of material. Ultimately, the Wild Flowers want to break barriers, erase stereotypes and promote diversity with their music. Paradoxically, Shu and Rabee will have to overcome some of these stigmas to reach a wider audience.

“We have been told numerous times by various people in and out of the industry that female duos don’t work,” Shu says. “Everyone says, ‘They don’t make it. They don’t have any longevity. You need to add another member. Everyone is going to think you are lesbians.'”

The Wild Flowers shrug off the shallow classification “chick music,” but the group’s gigs attract a strong female turnout. That the duo lures sizable crowds, regardless of gender composition, is an impressive feat; it’s a chilly climate for urban artists in Kansas City. Most musicians who play hip-hop, R&B and neosoul struggle to find a venue to perform live and receive little support from DJs who spin at local clubs. The Wild Flowers have managed to scratch up a few gigs around town (at Danny’s and the Hurricane) and have been included in the mix by a couple of DJs. But for the most part, it has been a grind.

Shu and Rabee came together a year and a half ago. Shu was born in Seoul, South Korea, and raised by American parents in Ames, Iowa, from the age of one. At Iowa State, she befriended Rabee’s older brother and encountered Somalia in passing. Shu moved to Kansas City to attend UMKC, but the two didn’t develop a friendship until they discovered that they had a common interest in music. Both were former high school marching-band members who now wrote and played original material.

“We started hanging out and playing music together just for the hell of it,” Rabee says. “Then one day we just decided that we would try and land a gig. Just one gig, that’s all we wanted to do. We just wanted to see if we could do it.”

The women scored their first gig at the Cup and Saucer last August. The first Wild Flowers performance went so well that Shu and Rabee decided immediately to pursue a career as recording artists.

Now, less than a year later, they’re opening for a nationally known act in front of a packed house populated by buppies and black bohemians. It’s a rare opportunity for these folks to catch a live set at a black nightclub. The crowd seems excited, but no one is more energetic than the Wild Flowers, who will perform two songs in front of the largest crowd of their brief career.

The gig starts late. The sound crew has problems with the sound system, which was imported to enhance the club’s existing system. Unfortunately, it can’t improve the acoustics, which make the duo sound as if they’re playing inside a coffin. Nonetheless, the Wild Flowers’ strong harmonies overcome these nightmarish conditions.

A handful of heads connect, but most of the patrons are busy ordering drinks and fried chicken. Still, the Wild Flowers do a commendable job of competing against the busy bar and getting the attention of a crowd that’s eagerly awaiting the Grammy-nominated Floetry. “We were the underdog,” Rabee says. “But the experience was important.”

The duo’s style and sound are better suited to a more intimate setting. A few days after their set at the Floetry concert, the Wild Flowers perform at Joe D’s on 39th Street. The duo performs its full set as part of the restaurant’s Sunday Arts Revue, a weekly showcase for up-and-coming local artists.

During this gig, Rabee strums while hiding her face with a tattered baseball cap pulled over her brow. Shu, her hair draped past her shoulders, is dressed more exotically, in tight jeans, a halter top that exposes her belly button, and Gucci-style shades. She sips on a glass of wine between songs while Rabee drops commentary about each tune.

The small audience is much more engaged than the Epicurean crowd. Its members swoon in unison when the Wild Flowers break into “Spin,” the best and most popular track on the group’s demo CD. The number, which celebrates survival, independence and sexual freedom, has become an underground anthem of sorts for local women.

“Spin” just might be the track that propels the Wild Flowers’ career. But even if recognition takes time, Shu and Rabee don’t mind the wait.

“We would love to sign with a major label, but we aren’t actively pursuing a deal,” Shu says. “If it happens, cool. But it’s about the music first and our dedication to our craft.”