In 1936, the Orpheum catered to black ties headed for mothballs 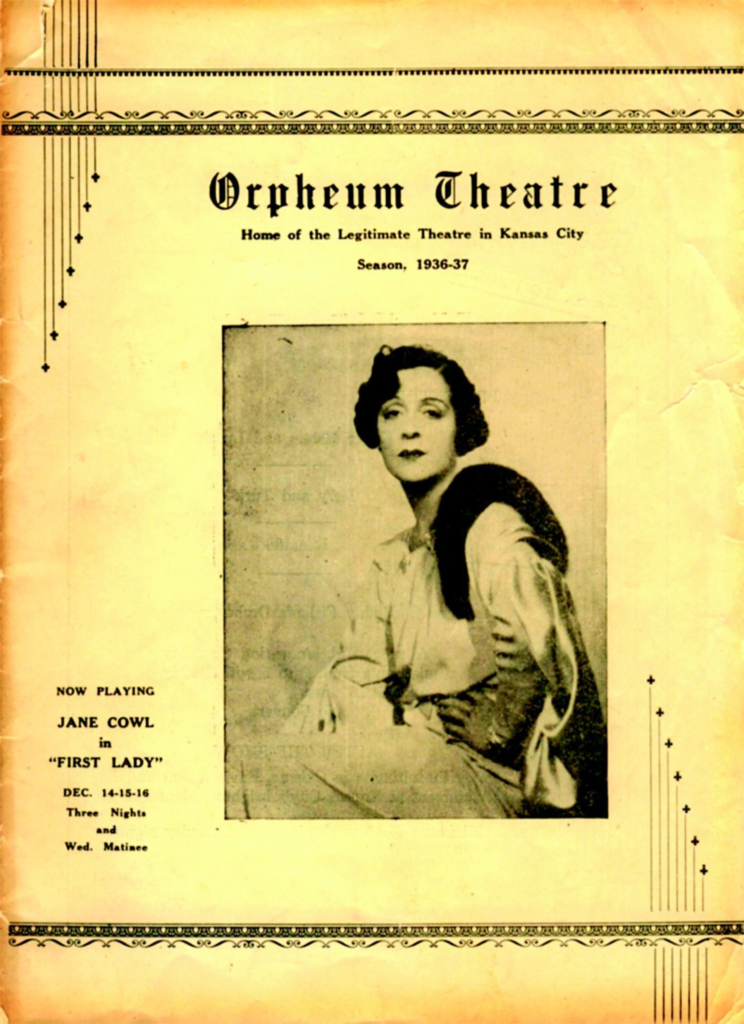 By 1936, the Orpheum Theatre, on the northwest corner of Ninth Street and May, had taken to calling itself “Home of the Legitimate Theatre in Kansas City” on the front page of its programs. Something had gone wrong. The Gayety had closed a year before, and the Shubert had just been demolished to become a garage. Faced with not only the grimness of the Depression but also the cheap splendors of Hollywood, theater owners simply couldn’t attract the same crowds as before.

Not even to see the great Jane Cowl in First Lady, a comedy of Washington wives “written and staged” by George S. Kaufman, the comic playwright and Algonquin wit who invented Groucho Marx’s walk and talk. (Groucho was never shy about admitting this.)

There’s little about First Lady in this 24-page program, but there’s plenty about Depression-era Kansas City. First, just like today, advertisers presumed that patrons of the arts were doing all right. Ads for Shukert and Wilde-Steinbacker Furs, competing shops at 11th Street and McGee, tout “the one gift every woman wants.” Shukert describes a $250 coat this way: “Silver squirrel, tuxedo model, fashioned of prime quality skins, flattering in every detail.” A mink (“full furred and warm”) went for $1,150.

Diamants Jewel Shop, at 6 East 11th Street, offered 14 “blue-white” diamonds in one ring for just $69.75, or $1.25 a week. The Mona Mannequin School promised to teach young women “poise, charm and self improvement,” courtesy of Mona Rodman, who had “just returned from studying with the foremost teachers in Paris and London.” How much that would set you back, Mona neglects to mention — talking price would have been unladylike.

It’s no surprise that a dying theater was patronized by Kansas City’s shrinking aristocracy. Much more interesting is the evidence of what those hoi polloi might have been up to after the show, especially in ’36, just three years after the end of Prohibition. A half-page ad for Club Harlem, at 15th Street and the Paseo, demonstrates that, even then, a buck could be made peddling sanitized black culture to well-to-do white folks. “Six Acts Hi-Class Colored Entertainers,” it announces, but only beneath this promise: “Exclusively for White Patronage.”

Stranger still is Johnny Engro’s Music, at Blue Ridge Road and Highway 40, that “Famous Rendezvous” where there’s “Dancing Every Night” and celebrated steak and chicken dinners. Look at that name again: Johnny Engro’s. Meanwhile, out at Club Reno, at 602 East 12th Street, Count Basie himself was assembling one of history’s greatest bands. But you’d never know that from the Orpheum’s advertisers.

It’s worth remembering: If you keep to your own neighborhood, you might be missing the world.

The “Outstanding Stars From the Leading Night Clubs of New York, Chicago and Hollywood” joined Herb Johnson and his Orchestra at the 85 Club at 1706 Baltimore. Its slogan: “Where Old Friends Meet.” Its promise: “selling all legal beverages.”

The chain of Katz Drug stores probably inspired this notice at the bottom of an ad for Katz Exclusive Millinery Inc.: “Not Connected With Any Local Firm of Similar Name.”

“After the Show the Swing is to Meyer’s Barbecue and Catering Co.,” which specialized in “Frog Legs & Barbecued Meats” in two locations — Ward Parkway and Pennsylvania, and 46th Street and Virginia.

R.R. Kingsbury Company had been repairing and selling “vacuum sweepers” for 21 years.

Ads notwithstanding, it wasn’t just the wealthy buying theater tickets. An announcement at the bottom of the program reads: “Make reservations early for Awake & Sing,” which is encouraging. When Clifford Odets’ drama hit Kansas City, not long after First Lady, the poor would be bumped from the cheap seats to the stage itself.