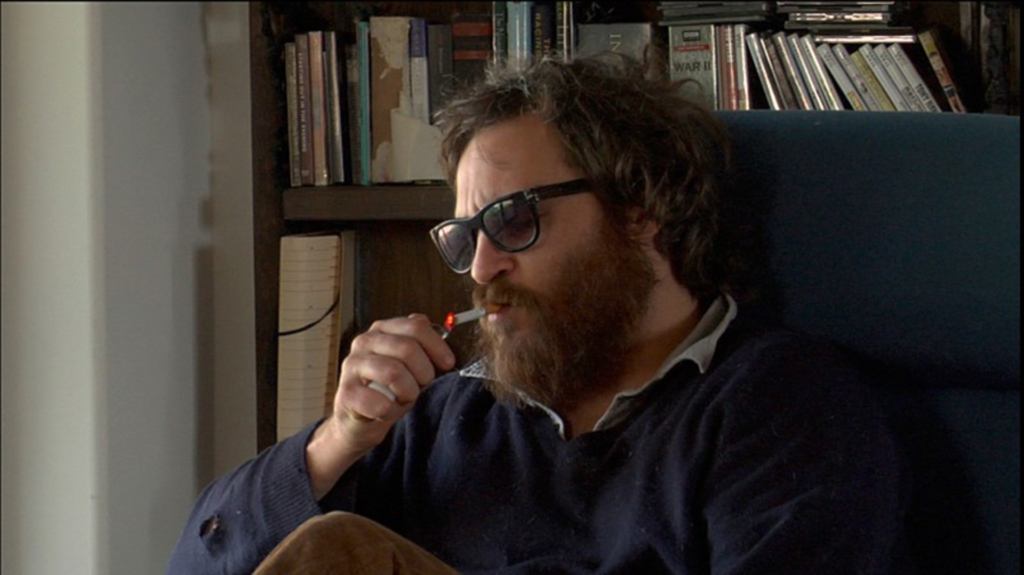 I‘m Still Here — “that Joaquin Phoenix movie” — forces us to ask: Are they fucking with us?

Directed by Phoenix’s brother-in-law, Casey Affleck, the film purports to document Phoenix’s high-profile “retirement” from acting, his alleged attempt to transition into a hip-hop career, and his subsequent and much-publicized meltdown.

Whether the retirement was contrived or permanent, Phoenix has not appeared in, or publicly acknowledged shooting, another film since. He also hasn’t released any musical recordings. In fact, he’s been all but absent from the public eye since spring of last year, which is coincidentally the same time that Here‘s portrait of his life ends.

At the outset of the film, Phoenix describes his acting career as a “self-imposed prison,” claiming frustration with his lack of creative control as a performer and resentment over his obligation to maintain his celebrity persona (“I don’t want to be the Joaquin character anymore”). And so, after participating in a charity theater event with a “dream team” including Affleck, Jack Nicholson, Sean Penn and “fucking Danny DeVito,” Phoenix gives a red-carpet reporter the “exclusive” news that this will be his last night as an actor.

This comes as a surprise to Phoenix’s publicist, who is helpless to intervene as her twice-Oscar-nominated client proceeds to obliterate any industry goodwill he might have had in a six-month flurry of drugs, shitty rapping, P. Diddy stalking and bizarre public appearances, peaking with Phoenix’s now-legendary February 2009 non-interview with David Letterman.

Throughout, Affleck tails Phoenix but largely refrains from intervening in the action, which is enabled by Phoenix’s entourage of two: a “general assistant” named Antony and Larry, billed as Phoenix’s “caretaker.”

It’s hard to doubt the veracity of what’s onscreen: Much of what Here depicts was breathlessly reported by the gossip media. But just after Phoenix announced his retirement, Entertainment Weekly quoted an unnamed source who claimed that Phoenix and Affleck were perpetrating a “hoax” for the purpose of a faux documentary. It’s a potential liability that Affleck and Phoenix drag into the frame, with Affleck angrily interviewing the EW reporter on camera, and Phoenix accusing Antony of selling his secrets.

Perhaps it goes without saying that Here was more provocative when it couldn’t be seen and it existed in the realm of rumor.

Here doesn’t offer anything that feels as queasily startling as that Letterman performance. After the taping, Phoenix is all too aware of what happened — “I’ve fucked my fucking life,” he wails. “I’m just gonna be a joke forever.” With this outburst, I’m Still Here‘s psychological strategy clicks into place, and its dramatic momentum increases considerably.

Was this all staged? Probably, but does that matter if it feels true? The end credits more or less confirm I’m Still Here to be a performance produced for cameras. But knowing that I’m Still Here was more invented than accidental raises more questions than it answers.

Why are they fucking with us, and are they even fucking with us or with their fellow celebrities, who stand to feel the force of the less-than-flattering aspects of themselves in Phoenix’s portrayal?

Though clearly mocking the delusions of grandeur embodied in one of Phoenix’s rap verses — “I’m still real/I won’t kneel/I’m the one God’s chosen, bitch” — I’m Still Here‘s bone-dry satire couldn’t exist without the celebrity-media feedback loop. But its apparent attack on the Hollywood machine is so insidery, so vicious, that to us, it’s just not clear why this stunt needed to exist at all.