If you love protests so much, why don’t you marry one? 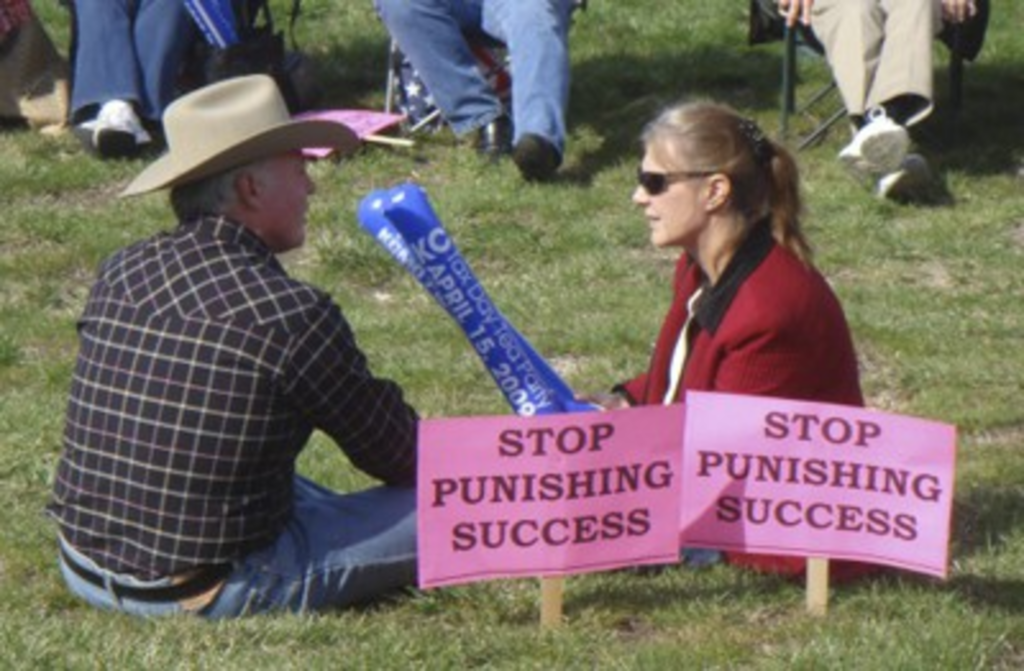 Last Wednesday, April 15, Americans had two choices: Make sure they had filed their income-tax returns by midnight or make sure they had filed their returns before going outside to shake their angry fists at the government and pretending they were willing to face prosecution for not paying their due. Across the country, newsrooms beefed up their usual stock stories about drive-through lanes at the post office and tips for procrastinators with lovingly indulgent coverage of “tea party” protests. If you collapsed at your calculator and missed the action, here’s a synopsis: Ron Paul survivors, race baiters, disenfranchised Republicans and struggling T-shirt vendors have thought way harder than everyone else about how to fix America. It’s enough to make you wanna go to Iowa and marry a same-sex partner.

It Was Bad and Was Nationwide

The Kansas City tea-day demonstration drew at least 2,000 people to the Liberty Memorial in an impressive display of inadvertent capitalism, ignorance of the war monument’s historic significance, and tolerance of ZZ Top cover bands. (Are you people teabagging or making a pearl necklace? Make up your filthy libertarian minds already.) Protesters who had a problem forking their money over to the government had no trouble buying merchandise at what organizers called a “grassroots political movement.” Well, it was political, anyway. It was the sort of event at which a speaker, introduced as a victim of local media censorship, got the hook just a little bit into her turn at the podium.

Staff writer Justin Kendall was there (and waiting for Mayor Mark Funkhouser, who pulled a Great Pumpkin and failed to materialize). Kendall just wanted to hear “La Grange,” but after he shouted at Sharp Dressed Man to play it, someone in the crowd questioned his ideological bona fides. “I want to make sure you’re here for the right reasons,” the protester said.

What were the right reasons? The free doughnuts, of course. And revolution. Kendall took a few photos for his April 16 Plog post.

and End Up in Branson

As wedding planners all over the Midwest know, the Iowa Supreme Court has ruled that Iowa’s gay-marriage ban is unconstitutional. Now gay couples can join their miserable straight brothers and sisters in laying out big bucks for state-sanctioned connubial bliss. But why should progressive types keep their revenue in the Hawkeye State?

Staff writer Peter Rugg, thinking big picture, put on his salesman’s hat for an April 16 Plog post and asked: What honeymoon spot could be more romantic than sexy, splendorous Kansas City? According to the Associated Press, Keith Winge, marketing director at the Elms Resort & Spa in Excelsior Springs, is considering a package to whisk lovers to the land of corn and equality for their wedding vows, then back to his honeymoon haven. For Winge, the Iowa decision represents a new challenge to conjugal enterprise. “It certainly puts you guys [Iowans] at an advantage to holding commitment ceremonies now,” he told the AP.

Rugg wasn’t able to reach Winge. An Elms staffer told him that she hadn’t heard about a proposed Iowa freedom-spa junket yet. The Elms’ Web site doesn’t list an Iowa getaway, either, so far. But come on — the place already offers the “Elvis & Marilyn 2009 Fantasy Performance Package.” Add newlywed lesbians and you have romantic lightning in a bottle.