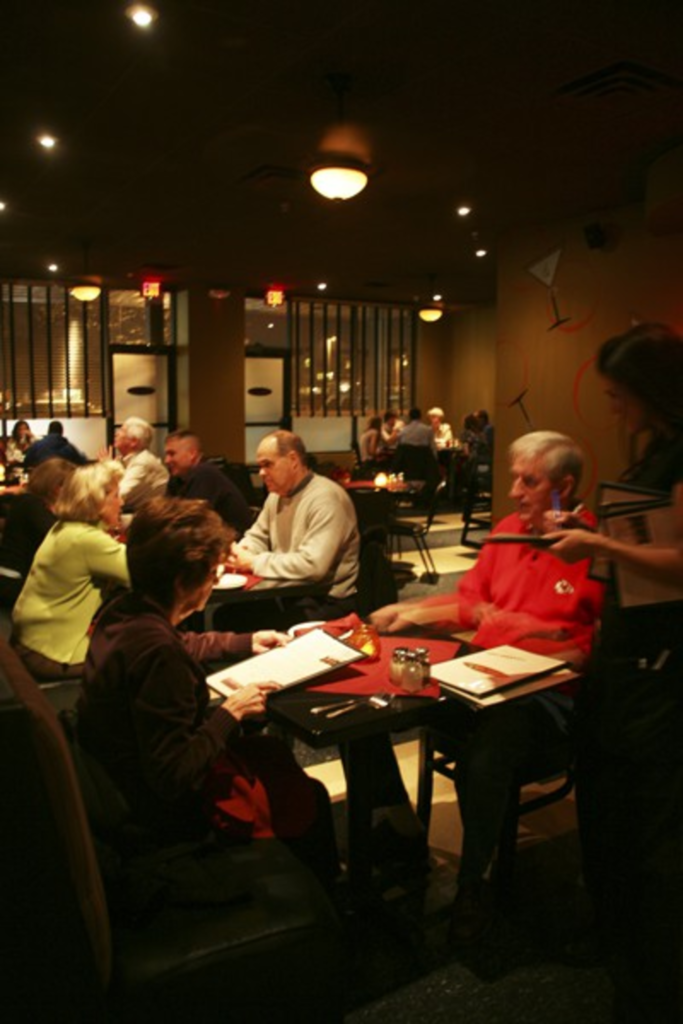 When I tell friends that the Cammisano family moved the Copa Room from a free-standing building in midtown to a strip center in Lenexa, their immediate reaction is always the same: “Why out there?”

It’s a knee-jerk response from die-hard midtowners, who seem to gripe about any restaurant located west of Mission Road. I had to endure a litany of groans from Bob and Georgina on the icy-cold night I drove all of us out there for my first look at the new place. But the owners, Carlo and Lenae Cammisano, had a perfectly good reason for uprooting their popular, family-style trattoria from 34th Street and Broadway.

“It’s three minutes from our house,” Lenae told me. “And we have two toddlers!”

There also were issues with the original space on Broadway, an aging building that had housed a dozen or more doomed restaurants over the last three decades (including a Cajun restaurant that nearly burned to the ground). It was also on a particularly desolate commercial stretch; its closest neighbor, Café Trio, is packing and moving soon to the Plaza.

Midtown’s loss is Lenexa’s gain, and I hope that Kansas hamlet appreciates the culinary contribution to its unspectacular restaurant scene. A friend of mine fretted that Carlo and Lenae — and Carlo’s mother, Kathy Fiorella, who continues to do the cooking — had lost their minds. “You know how you find the place?” he sputtered over the phone. “You have to look for the Hen House supermarket and once you find that, you drive through the parking lot, but make sure you haven’t passed the nail salon because then you’ve gone too far.”

Honestly, I found the restaurant without too much trouble. Its interior isn’t as stylish as the Broadway location, and it’s divided in a peculiar way, but the congenial man who escorted us to a table explained why: “This used to be two storefronts. There was a Mexican restaurant on the bar side, and the side that’s now our dining room was a liquor store that had sat empty for a really long time.”

Carlo Cammisano carved out a series of arches between the two sides and installed a curvy bar illuminated in red lights. It’s not as sexy as the old space, but customers aren’t going to drive out to 87th and Lackman to look at the décor. The Copa Room is named after the celebrated showroom in the long-razed Sands casino-hotel in Las Vegas — where Frank Sinatra and the Rat Pack hung out. Lenexa’s Copa Room doesn’t come anywhere near a Vegas-level showroom, but it does offer live entertainment four nights a week.

Local legend Frank Cherrito was singing on the Friday night I dined there with Bob and Georgina. In his distinctively dulcet style, Cherrito delivered standards from the Sinatra and Dean Martin repertoire to an enthusiastic but modestly sized crowd that wasn’t without its own celebrities. Hallmark’s Don and Adele Hall were dining at a front table with an entourage of friends, and a table of midtown Italian-American roués were having a raucously good time on the other side of the restaurant.

“I love this place!” Georgina said, settling into a comfortable booth. “But I’d never be able to find it again.”

Our waitress, a dazzling beauty named Anna, reassured Georgina that the six-week-old Copa Room was luring customers from both sides of State Line. Hell, if Frank Cherrito’s fans can find the joint, anyone can. And without any disrespect to Mr. Cherrito, the real star of the Copa Room isn’t the floor show but Kathy Fiorella’s marvelous cooking. I find myself actually longing for her sugo-smothered lasagna or handmade meatballs fried in olive oil — trust me, that’s not a typical reaction I have to this unsophisticated style of Italian cuisine.

It’s not expensive, and the portions are generous; except for a disappointingly stingy lunchtime antipasto platter, I was delighted with practically everything I tasted. The stuffed artichoke was deliciously slick with butter and garlic, and I’m a longtime fan of Fiorella’s house salad, served ice-cold and drenched in a first-rate balsamic vinaigrette.

Georgina watches her weight by ordering appetizers as a main course (a heresy as far as I’m concerned), but she nibbled on a bit of my sautéed basa — a light, flaky fish blanketed in lemon juice, wine and butter — because I snagged most of her fried meatballs for myself. Bob sang the praises of the Frank, Dean and Sammy Combo, which is one of Fiorella’s signature meals — a platter heaped with grilled chicken spiedini, a hunk of lasagna, and penne pasta in a creamy Alfredo sauce. “You can’t stop eating it,” he said.

We couldn’t contemplate dessert that night, even though I have a secret passion for Kathy’s spumoni cake. When I returned with Franklin and Truman for lunch a couple of days later, I decided to eat lightly so that I would have room for the pastry. Naturally, I nearly sabotaged my best intentions. We started with antipasto, which did have squares of fresh soft mozzarella, crunchy garlic crisps, fat marinated artichoke hearts and roasted red peppers, but too few slices of salami and too many damn pepperoncini. The dinner antipasto plate costs an extra couple of bucks and, I hope, has more to offer.

I overindulged on fried meatballs and crusty rolls and lasagna with a fat piece of Italian sausage. Franklin satisfied his addiction to garlic by downing all the plump sautéed shrimp in his dish of scampi, then sopping up the seductively pungent sauce with a hunk of garlic toast. Truman ate a big bowl of fresh-tasting chicken-and-vegetable soup and followed that up with an even bigger bowl of that day’s pasta special: a mound of linguini covered with chopped clams and a delectable tomato-basil sauce.

At the end of the meal, while Franklin and Truman blabbed away with Lenae Cammisano, I brazenly ate a thick slab of that spumoni cake — layers of moist pistachio, chocolate and cherry cake held together with whipped cream and nuts.

Suddenly Truman looked down at the empty cake plate and howled, “What happened? Where’s the cake?”

It was a selfish but slick move on my part. And I’m starting to think that the Cammisanos made a pretty slick move, too. It may take a little longer to get to the new Copa Room, but no one leaves hungry.