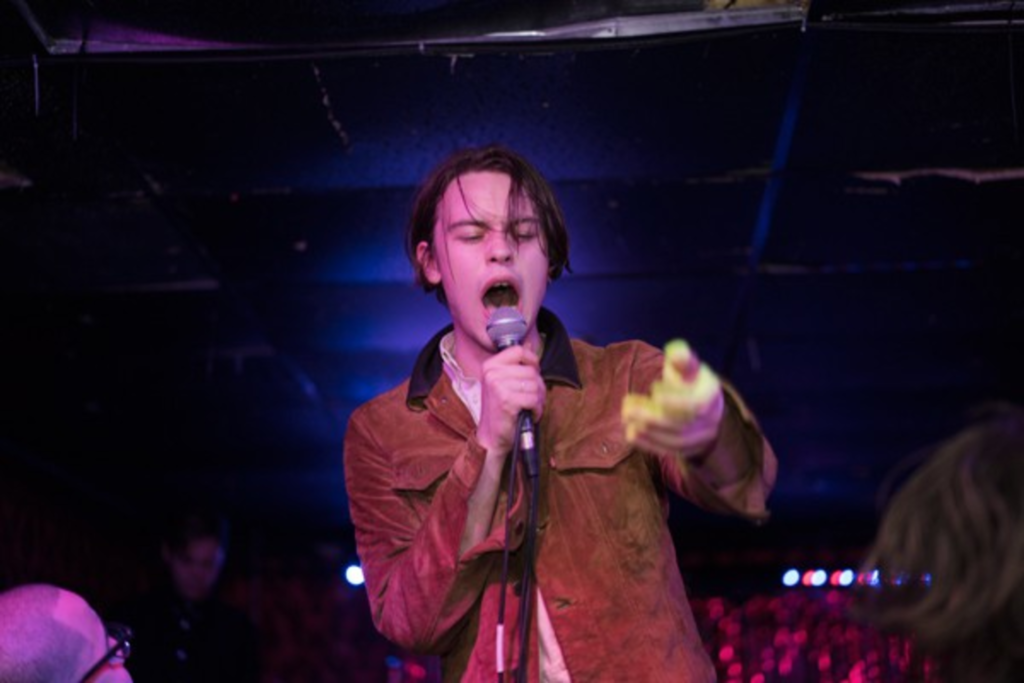 Last night at the Jackpot in Lawrence, Copenhagen’s Iceage played to a sparse audience – though the small crowd made up for its numbers in enthusiasm. The scrappy post-punk four-piece played a brief smattering of songs drawn almost entirely from its refined third album, Plowing Into the Field of Love, released earlier this month on Matador Records.

That album’s shift from two-minutes-or-less hardcore punk played at breakneck speed to slow churning, brooding rock and roll was translated thoroughly in the band’s live show. Musically, Iceage was razor sharp and tightly wound. Frontman Elias Bender Rønnenfelt stalked the stage as if possessed, brandishing his mic stand like some sort of staff and reaching up to drag one hand across the ceiling above the stage as he sang. He and his band performed with simmering, ferocious intensity despite the modest crowd. Stage banter was all but nonexistent, Rønnenfelt simply announcing the title of each song with deadpan demeanor prior to launching into it. 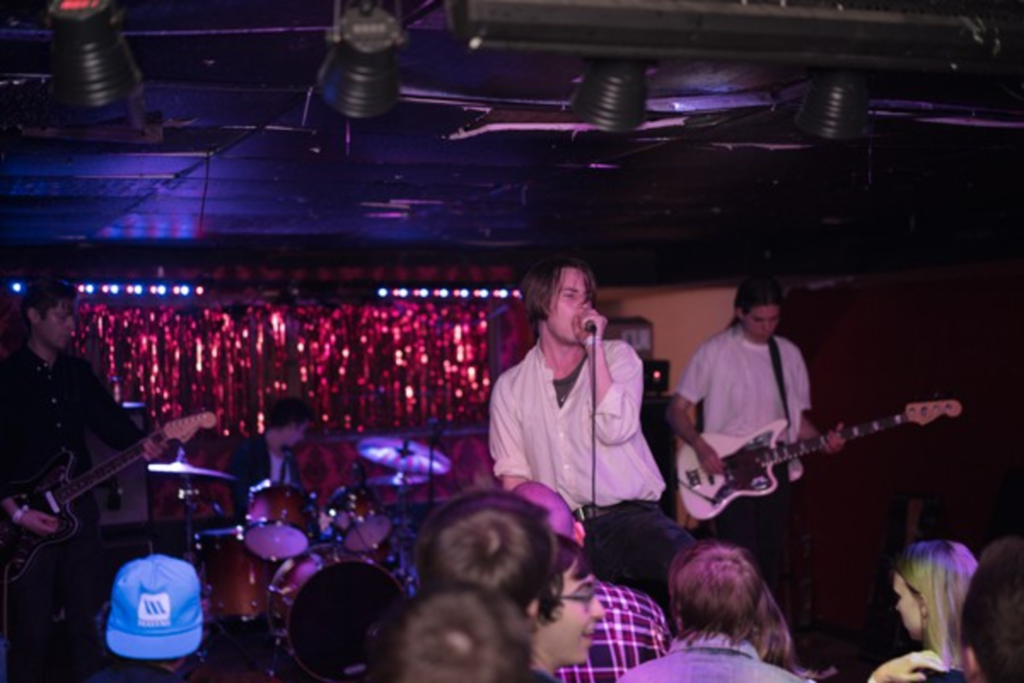 Iceage’s music, and Plowing Into the Field of Love especially, is the sort that requires complete conviction. Its dark, dramatic existentialism succeeds because it seems to exist within the confines of its own world. As such, the band’s deeply serious stage presence works, allowing no room for outside elements to creep in and alter the mood. Rønnenfelt’s performance felt drunken and ghastly, the perfect character sketch by which to perform these songs of desperation with unwavering force. Wearing a half-unbuttoned, loose fitting white shirt, he stumbled around the stage, slurring, singing and moaning into the microphone, his brown hair falling into his eyes as he swiped at the crowd one moment and offered them his hand the next.

For the fourth song in the set, Rønnenfelt announced “Abundant Living” (which they played next), but the band instead launched into “Morals” from 2013’s You’re Nothing. The howling ballad, which picks up speed during the song’s chorus, seems to stand as an initial blueprint for the recent development in Iceage’s sound, and as such it fit nicely in a set otherwise derived of all new material. 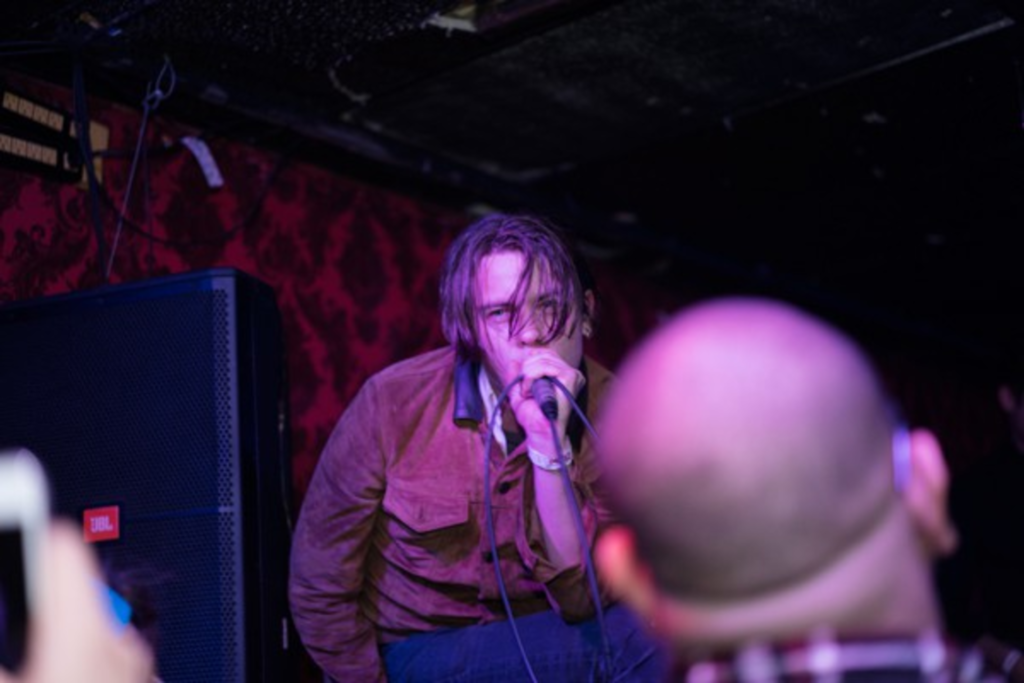 A highlight in the band’s set came later in the show when they tore through “The Lord’s Favorite,” an uncharacteristically upbeat sort of post-punk, rockabilly hybrid that sees Rønnenfelt singing of “one hundred euro wine” and “five inch white high heels” at perhaps his least self-serious moment, albeit with no less conviction. The crowd loved it, breaking out into the small but charged mosh pit that stopped and started at various points throughout the show.

Iceage reached even greater heights during the finale of their brief, eight-song set, closing with the slow-burning “Forever” that wouldn’t sound out of place in a Hollywood adaptation of one of Cormac McCarthy’s apocalyptic westerns. The song began with a low, menacing intent, employing the Ronettes’ classic “Be My Baby” beat to decidedly more sinister effect before bottoming out into a pummeling, Sonic Youth-inspired pre-chorus. 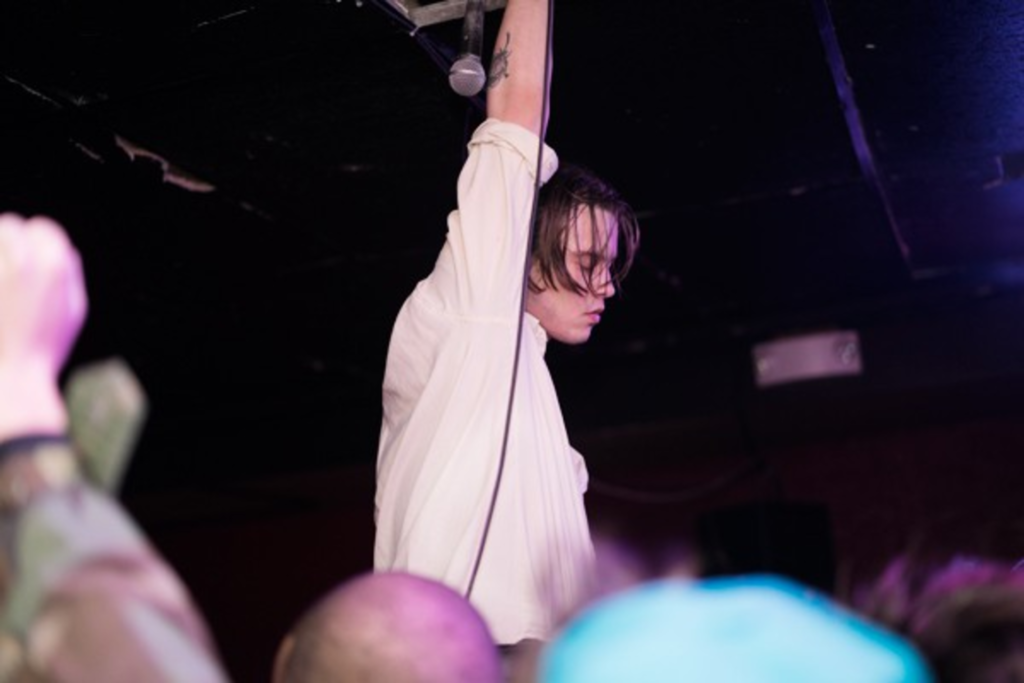 The mood shifted as Rønnenfelt delivered the song’s thesis, eyes closed and limbs flailing: If I could dive into the other, like it was an ocean, caressed by its water, I’d lose myself forever. After the song soared to its claustrophobic peak, Iceage bowed stoically and left the stage with no encore. It was a fitting end to the night, and anything less than brevity may have threatened to compromise the world that Iceage exists within.

Setlist:
Let It Vanish
Glassy Eyed, Dormant and Veiled
How Many
Morals
Abundant Living
The Lord’s Favorite
Plowing Into the Fields Of Love
Forever