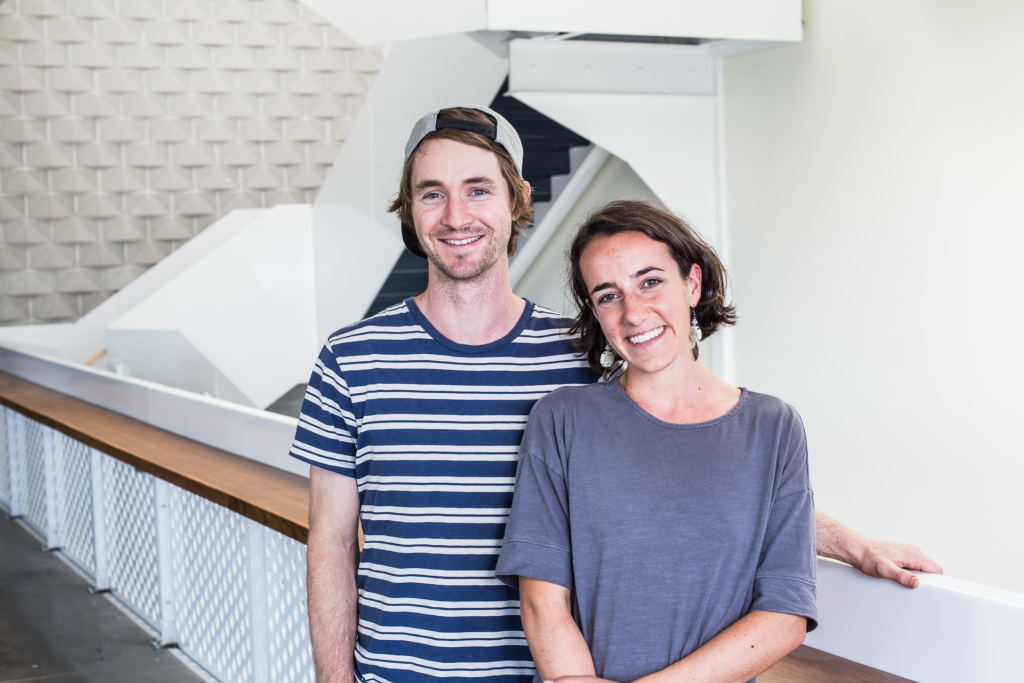 The mill inside Messenger Coffee’s new space, at 1624 Grand, comes from Vermont, and it’s impressive: two large stone discs, perched atop a frame of metal and wood. Whole grain comes through the stainless-steel hopper into a hole in the top stone, then flows into a webbing etched into the stones. The stones crush the grain and push out flour — an ancient process humming through modern, made-to-order tech and put on proud display. This historically protected building, housing the sister outpost of Lenexa’s Ibis Bakery alongside Messenger, is home to Kansas City’s first independent flour mill in recent memory.

The collaboration between Messenger and Ibis — which opens this month — springs from a web of family ties and ever-expanding business partnerships. It’s owned by Messenger Coffee Company, Chris and Kate Matsch (owners of Ibis and Fervere bakeries), and Carol and Ron Matsch (entrepreneurs themselves as well as parents to Chris and Matt Matsch, among the six partners in Messenger). The three groups have spent three years working with the city, architects Boor Bridges (of San Francisco) and Draw (of Kansas City) and Three Square contractors to revitalize the old commercial space. The results are clean and impressive, with a modern metal staircase and die-cut metal panels framing the second-floor loft and complementing restored original features such as the first floor’s salt-and-pepper hex-tile floor. 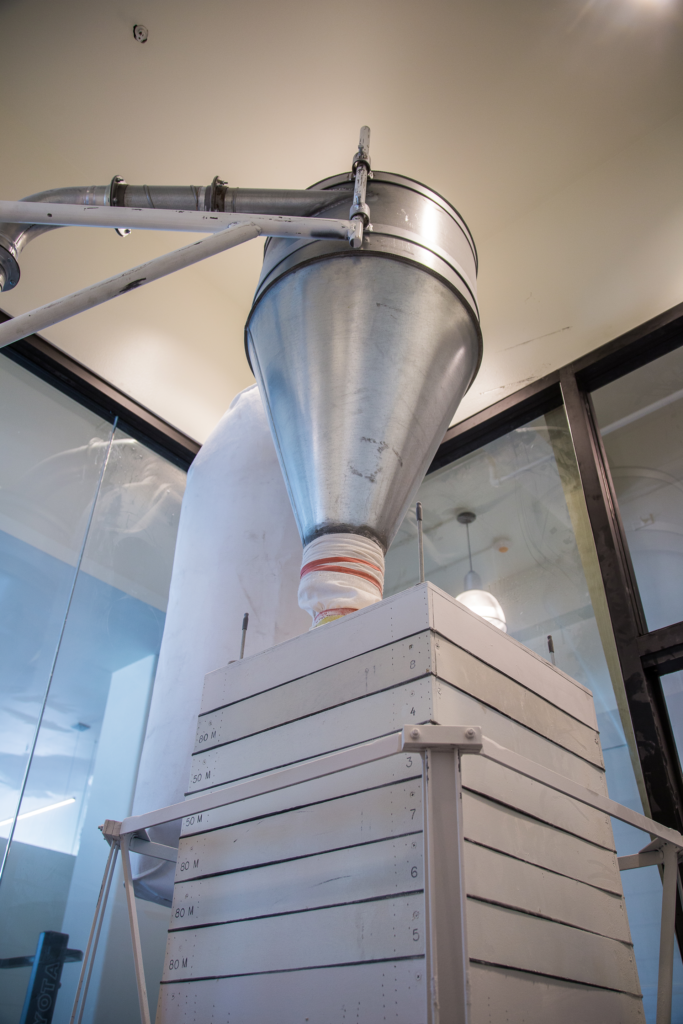 Under a soaring ceiling, the first floor of the Grand Boulevard–facing space features a service counter on the north wall for the facility’s coffee and food offerings. Taking up the entire south side of the large footprint is the bakery, with different areas dedicated to bread and pastry. Toward the back of the room, in its own glass-enclosed space, are that mill (which takes up about 6 square feet) and a sifter.

Up the metal staircase — towering, angular, blue and white — is Messenger’s large roaster and a tasting room. Both floors were designed to be fully open, with the idea that all of the processes — breadmaking, milling, coffee roasting — would be entirely visible to the public. In fact, the owners hope that the public comes to watch; a transparency bordering on the participatory is almost the point of this place.

“Our goal is to have people engage and interact with what’s being done here,” Chris Matsch says. “The idea that you can watch flour being made or coffee being roasted — neither of those are unique in and of themselves, but to be able experience it and have it be open like we’ve created it, we’re really excited about it.”

On the bakery side, Matsch plans to run a program unique to this location, keeping the work at Ibis in Lenexa and Fervere focused on what patrons of each have come to know. He explains that his program at Messenger will be bread- and pastry-focused. There will be some breakfast and lunch items, but the menu won’t be as extensive as the one at Black Dog Coffee, Ibis’ neighbor-partner in Lenexa. Pastry offerings will include croissants and buns made with laminated doughs, tarts, petit fours and more. Principally, though, he wants the products, especially the breads, to highlight the flour being milled on-site. “We really want this to be an outlet to showcase what we’re doing,” he says. 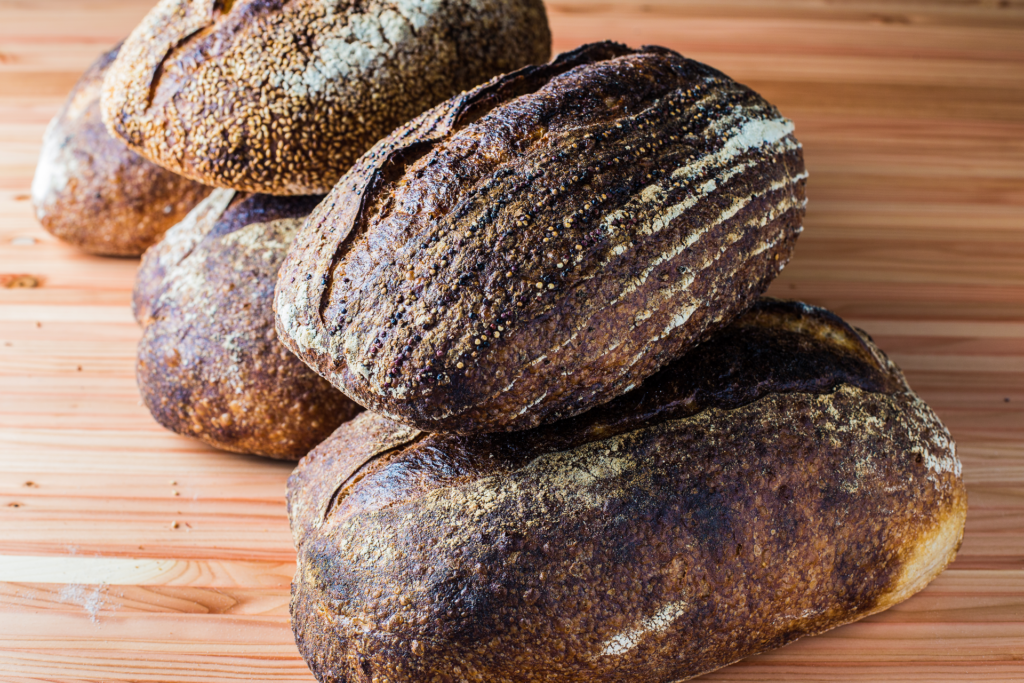 Having the mill here, Matsch says, allows this Ibis to use different types of grain and capitalize on what he says is a substantial difference in flavor with fresh product. “The flavor that comes out [of using fresh-milled flour] is totally unlike normal bread,” he tells me. “You have all these natural oils that dissipate over the course of a few days. But when it’s actually fresh, the aromatics of the bread are much more intense. You also use a lot less of everything — less starter, and less flour in the dough to make it become bread.”

On the second floor, Messenger’s head roaster, Kiersten Rex (one of just three female coffee roasters in KC, according to Messenger), and green-coffee buyer Nick Robertson are glad the company finally has a home base. (The two are also partners in the business.) Though Messenger has ties to Black Dog Coffee in Lenexa and Benetti’s Coffee in Raytown, and has a controlling stake in the Filling Station shops, this is the first address open to the public that bears Messenger’s name.

Messenger’s showpiece object is a manual San Franciscan drum roaster, a beautiful hulk with a matte-black body and shiny gold accents that suggest a 19th-century steam engine. Like the flour milling, the coffee roasting on Grand is meant to be a public spectacle, visible from the handful of tables located upstairs. (Robertson admits that the roaster is somewhat loud, so most people who opt to sit upstairs for a while will likely belong to the earbud set.)

Rex and Robertson will be roasting and testing at this location, offering cuppings to potential and current partners in a private space on the second floor (one with windows, so patrons can view this as well). Messenger sources its beans from around the world, and Robertson says the company tests hundreds of different crops a year to find its favorites.

There is one more floor at Messenger, a space partly reserved for private meetings and events. Most of it, however, is taken up by an impressive rooftop deck with 360-degree views of the Crossroads and downtown, which will be open to the public. It is a nearly literal cake topper for an ambitious aesthetic project.

“You’re kind of participating in this process of a craft product, and you can eat it — that’s really exciting to me,” Matsch says. “We hope that people will feel comfortable to engage with it at whatever level they want, either people who want to bake with us now or have classes, or if they want to have a public cupping or just come and grab breakfast.”