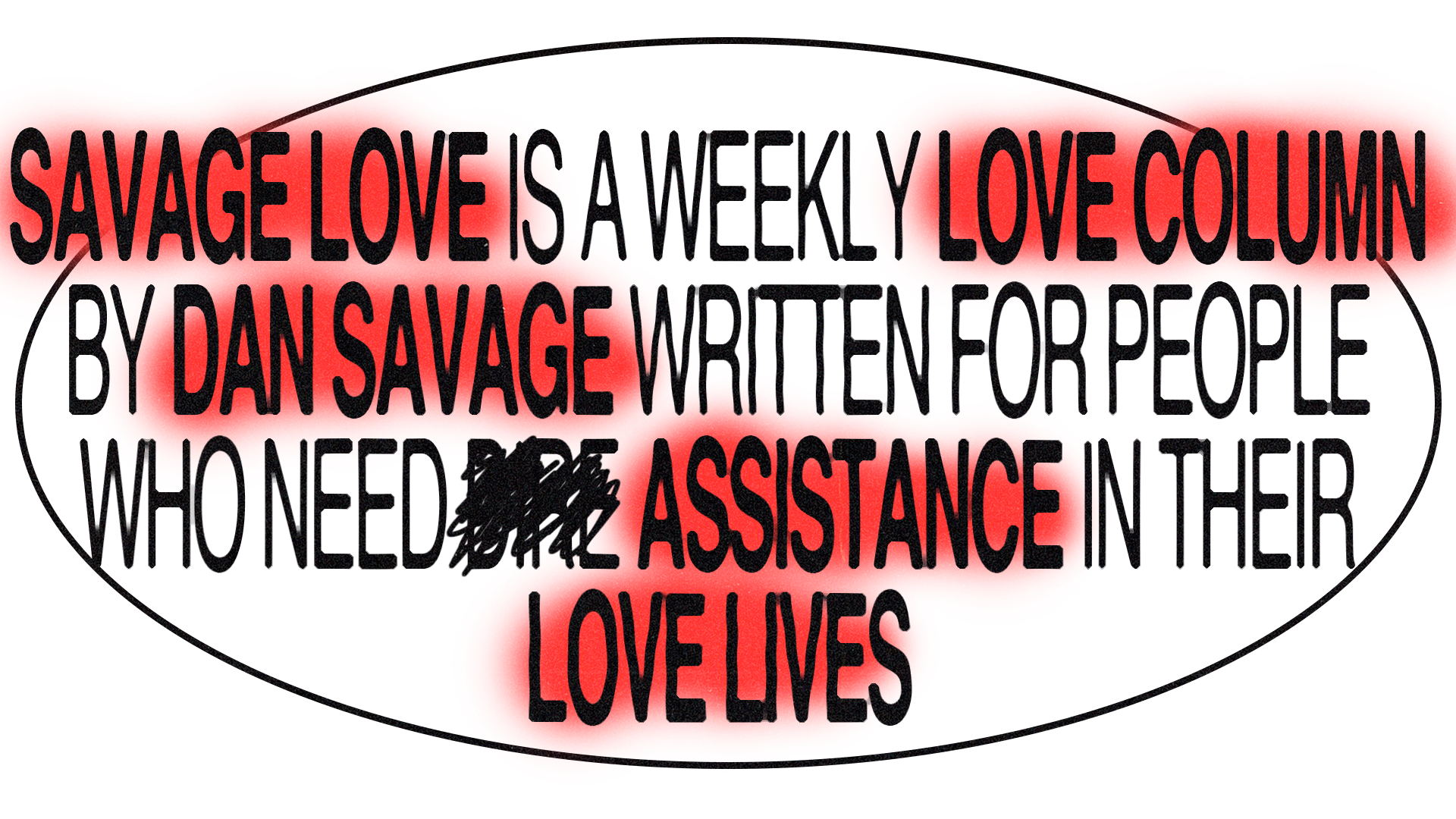 Dear Dan: Here goes: I’m a 32-year-old gay male and I have trouble staying out of my head during sex. I feel like there may be many issues. The one non-issue is everything works fine on my own. When I’m single or “available,” I am OK. Let’s be honest: I’m a slut and I enjoy it. But when I invest in someone, when I’m trying to have an actual relationship, the sex suffers. With a partner I care about I feel nervous. I feel small both mentally and physically. And I worry my dick is small. I’ve measured and photographed it, so I know better, but something in me is always asking… are you really enough?

I’m currently in an open relationship with a guy I’ve known for a decade. He’s amazing. Often I’m hard AF just sitting there relaxing with him. But the closer we get to actually having sex, the more nervous I become. I even stop breathing consistently. It’s almost like I feel ashamed to want someone so much. Or something? It’s frustrating because I would love nothing more than to fuck like rabbits until we were both exhausted. I love him and I want to be able to please him sexually! Our intimacy, our conversation, our connection—everything else is so strong. But I feel like my problem will kill any future I might have with him. He hasn’t really expressed a concern but I worry.  I have considered the idea of therapy but the idea of talking to some stranger about my sex life face to face is just daunting. So what do I do? My other thought is to just blindfold him and say bottoms up.

Dear DIL: So you don’t wanna talk with a therapist about your issues—which touch on more than just sex—but you’re willing to talk to me and all of my readers about them. I realize it’s a little different, DIL, as you don’t have to look me in the eye while we discuss your dick. But there are therapists who specialize in helping people work through their issues around sex and they’re usually pretty good at setting nervous new clients at ease. They have to be. So I would encourage you to have a few sessions with a sex-positive queer shrink. Talking about your dick with a stranger will be awkward at first, of course, but just like eating ass, DIL, the more you do it, the less awkward it gets—and after a few sessions, your therapist won’t be a stranger anymore. (To find a sex-positive/poly-positive sex therapist, head over to the website of the American Association of Sexuality Educators, Counselors and Therapists: aasect.org.)

In the meantime, DIL, go ahead and blindfold your boyfriend—if he’s game, of course, and I can’t imagine he wouldn’t be. You seem to have an irrational fear of being seen. If your boyfriend were to get a good look at you naked, DIL, especially if he got a good look at your dick, you’re convinced he would suddenly conclude—even though he’s known you for a decade and is obviously into you—that you’re not “enough” for him. So don’t let him get a good look. Blindfold that boy.

Don’t lie to him about why you want to blindfold him—tell him you feel a little insecure—but bringing in a blindfold makes working through your insecurities into a sexy game. Being able to have sex with the boyfriend without having to worry about him sizing up your cock will free you to enjoy sex and who knows? After a few hot sex sessions with your sensory-deprived boyfriend (or a few dozen hot sessions), your confidence may get the boost it needs and you won’t feel so insecure about your cock or anything else.

And even if your dick was small—which it isn’t, DIL, and you’ve got the measurements and photos to prove it—you could still have great sex with your boyfriend. Guys with dicks of all sizes, even guys without dicks, can have great sex. And if you’re still nervous after blindfolding the boyfriend and worried you’ll go soft, DIL, you can take the pressure off by enjoying sex acts and play that don’t require you to be hard. You can bottom for him, you can blow him, you can use toys on his ass, you can sit on his face while he jacks off, etc. There’s a lot you can do without your dick.

Zooming out, DIL, intimacy and hot sex are often negatively correlated—meaning, the more intimate a relationship becomes, the less hot the sex gets. Anyone who’s watched more than one American sitcom has heard a million jokes about this sad fact. People in sexually exclusive relationships who still want hot sex to be a part of their lives have to work at solving this problem with their partners. But if you’re in an open relationship and can get sex elsewhere, well, then you can have love and intimacy and pretty good sex with your partner and adventures and novelty and crazy hot sex with other people.

Ideally, of course, a person in an open relationship wants—and it is possible for a person in an open relationship to have—hot sex with their committed partner as well as their other partners. But some people can’t make it work, DIL. However hard they try, some people can’t have uninhibited or unselfconscious sex with a long-term partner. The more invested they are in someone, the higher the stakes are, the longer they’re together, etc., the less arousing sex is for them. Most of the people with this problem—people who aren’t capable of having great sex with a long-long-long-term partner—are in monogamous relationships and, judging from the jokes on sitcoms, they’re utterly (but hilariously) miserable. You’re not in a monogamous relationship, DIL, so if it turns out you’re incapable of having great sex with a committed partner—if you can’t manage to integrate those things—you don’t have to go without great sex. You can have intimacy at home and great sex elsewhere.

But it’s a double-edged sword, DIL, because if you can get hot sex elsewhere, you may not be motivated to do the work required—to talk to that shrink, to get that blindfold, to work through those issues—that would make it possible for you to have great sex with your partner and others.

Dear Dan: I’ve been with my boyfriend for three years. I’m a 27-year-old woman and this was my first “real” relationship. Before I met my boyfriend, I would have considered myself a steady dick-jumper. I went flitting from guy to guy. On paper, our relationship seemed great. He tries to make sure I have what I need, whether it’s a meal, a TV show, a record to play. He is stable and affectionate; most of all, he wanted to be with me. But he’s boring. When I talk to him, I want to be somewhere, anywhere else. The more I tried to engage with him, the more obvious our lack of any deep connection seemed. He is stoic and un-emotional whereas I cry during car commercials. I’m desperately seeking an emotional equal. Every day I go back and forth between loving where we are and wanting to run the fuck away. I have a tendency to do the latter—with guys, friends, jobs—so I don’t know what I REALLY want. But I feel so incredibly unfulfilled. We have a lackluster sex life and I feel more like his roommate the past year than his girlfriend. I want to be inspired by my partner. My question is… actually, I’m not really sure I have a question.

Dear FRF: Since you didn’t ask a question, FRF, I guess you don’t require an answer. So I’ll make an observation instead: You repeatedly refer to this relationship in the past tense. (“…this was my first ‘real’ relationship,” “…our relationship seemed great,” “…the more I tried.”) So you obviously know what you need to do. Your soon-to-be-ex-boyfriend sounds like a good guy, FRF, and you don’t want to hurt him, which makes dumping him harder. But if he’s not the right guy for you, FRF, you’re not the right woman for him. Go back to flitting—and who knows? Maybe one day you’ll jump on a dick that’s attached to a guy you who inspires you. Or maybe you don’t want one guy—forever or for long. Some people are happier flitting than settling.

Join us for the Savage Lovecast Livestream! June 4, 7:00 pm PDT. Send your questions to livestream@savagelovecast.com, and I might answer yours on the show. Visit savagelovecast.com/events for tickets.
mail@savagelove.net
On Twitter @FakeDanSavage

Quick Q's from the Lovestream