I laughed at a cop’s wife during a city council meeting. Here’s what she said that broke me. 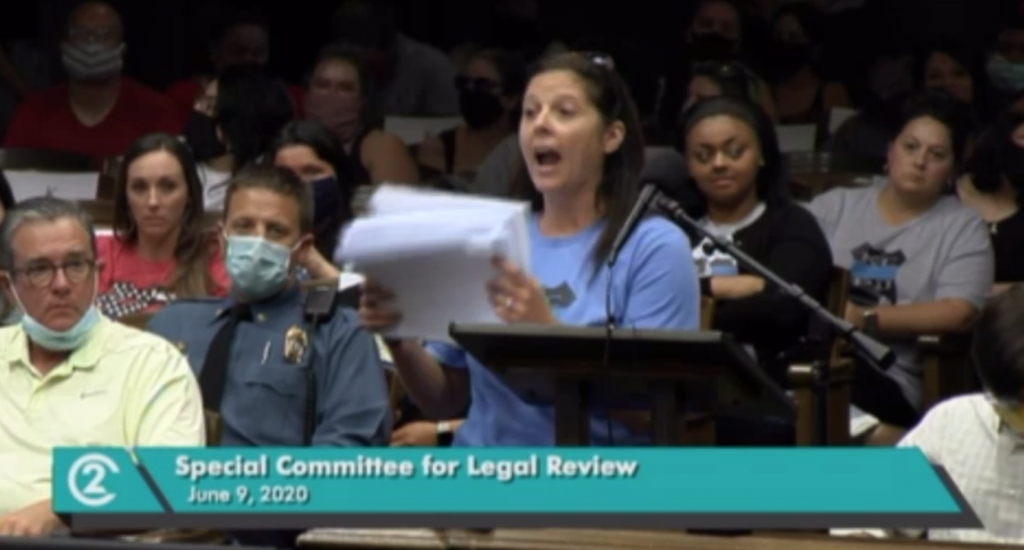 Maybe you’ve seen the video–it’s been seen on CNN, and highlighted on the John Oliver show–where a black man protesting on the Plaza is seen shouting at a line of police from where he stands on the sidewalk. The cops advance on him, unceremoniously unleash pepper spray on him and his neighboring protestors, then pull the man into handcuffs and arrest him.

Brandon Ellington, Councilmember at Large for the 3rd District of Kansas City, showed this clip and others to the Special Committee for Legal Review on June 9, as he proposed an ordinance dismissing charges against nonviolent protestors.

As the video played, showing obvious excessive force and an unjust arrest, most of us gathered in the City Council chambers watched somberly. Except a woman in a KCPD t-shirt, who chuckles and shakes her head. Someone nearby cries out in anger, “She thinks this is funny?” I echo the sentiment, we’re outraged, and another woman nearby puts her hand on my shoulder to calm me.

In my book, the only way you could laugh at that sort of abuse of power is if your humanity is pretty broken. This woman, later identified as Erin S. sat with a cadre of police wives, all in their matching KCPD t-shirts, with matching snooty expressions on their faces. They also refused to wear masks–unsurprisingly, whether or not you were wearing a mask was a pretty good indicator of whether you were on the cops’ side or the protestors’ side. One of the cop wives scoffed, “I ain’t afraid of no COVID,” displaying a complete lack of understanding on how COVID works (being unafraid makes no difference to a virus), and why people wear masks (to protect those around them).

I was sitting near the cop wife crew, and listened to them complaining about protestors, as we waited for the hearing to start. “They were so rude to come to the cops’ neighborhoods,” one of them said. (WTF is a ‘cops’ neighborhood?’ Have they considered their neighbors might’ve been at the protests, too?) Another one added, “Do they think we don’t have guns?!” They seemed less cocky about their ability to protect themselves from non-existent threats as they left the courthouse: At least one of the wives asked a police officer to escort her to her car after the hearing. It was a sunny afternoon in bustling downtown Kansas City, but yea, sure.

After Ellington presented information about the ordinance, Mayor Pro Tem Kevin McManus called forth those who wished to speak. Hours of testimony followed. The hearing was tense, often emotional. Black folks spoke about the harassment they’d endured. Protestors and witnesses spoke about the preemptive aggression of police.

The only voices in opposition were Brad Lemon, President of the Fraternal Order of the Police, and this cadre of cop wives, with Erin S. as the obvious ringleader, who was given additional time to speak on behalf of most of them.

(The cop wife crew also declined to give their full name and addresses when they testified, despite being requested by the committee. I later heard Erin S. refuse to give her full name to KMBC’s Mike Mahoney, asking him to just describe her as wife to a police officer. Yes, really.)

When Erin S. testified about how hard cops’ jobs are and how much good they contribute to the community, I laughed. In the middle of this serious, crowded, stressful committee hearing, laughter bubbled out of me at the absurdity of what she was saying. Of course, the cop wife cadre was not a fan of me laughing at them. They started shouting. They pointed at me, without looking at me, while shouting at the committee to get “this” under control. They shouted about how well-behaved they were, unaware of the irony that their shouts were far more disruptive than my laughter. It was all pretty funny though, to be honest.

In Erin S.’s testimony, she said, “We’re here because we no longer feel safe in our city.” She complained about people taking pictures of homes with cop cars outside them. Fireworks being tossed. Maybe they might begin to imagine what it’s like for black people who spend their whole lives threatened by stalking, harassment, assaults, and murder by police.

It’s a joke to cry about not feeling safe when you are an agent of the State, trained and authorized to use violence at will.

Police treat people–predominantly black people, poor people, people with mental health issues–as threats, which becomes a self-fulfilling prophecy, creating a situation where there isn’t one. They are primed to see the communities they are ostensibly serving as enemy combatants, and the cops approach them as such — both by showing up armed to the teeth and escalating with their behavior. This is how traffic stops become deadly encounters for black folks. This is why a white person calling the cops on a “suspicious” black person in the neighborhood puts that person’s life at risk unnecessarily. (Some ideas on what to do instead of calling the police.)

Police are not heroes. They don’t even have the most dangerous jobs. (Fishers and loggers are drastically more likely to die on the job than cops. Even in violent deaths, taxi drivers have a higher chance of being killed.) But police are the beating heart of violence in our communities. They are taught how to use violence effectively, and so it’s no surprise when they find occasion to use those skills. And it’s more than just death-by-cop–police uphold violence by enforcing poverty with fail-to-pay warrants, by enforcing evictions, by harassing folks who are homeless, by racially profiling drivers, by lying to people in custody about their rights, and so on. This is bigger than just how some cops behaved at one protest. It is the role policing plays in our society.

But — “They build relationships with the community,” says Erin S. “They play basketball with kids in the street. They give kids a place to go after school. They coach little league teams. They work hard, every day.”

If the most positive thing we can point to is that cops play basketball with kids in the street, well, they don’t need guns to do that. We don’t need police officers at all, actually. Maybe if those kids’ mothers got paid a living wage so they didn’t have to work three jobs and if those kids’ fathers weren’t imprisoned on a minor drug possession charge, they would have family at home to mentor and coach them.

Police do not make our communities safer. Resources do. When folks have safe housing, good jobs, access to health care (including mental health care), places to turn to help with addiction, good schools and day care for children… crime becomes a non-issue.

I laughed at the cop wives’ claims because they’re so absurd when placed against the lived realities of trauma and oppression that black folks face everyday–that police perpetuate everyday. Thinking about those realities now, I don’t feel like laughing at all. But laughter’s a really useful tool to get under the skin of self-important people who are raging against you.

This isn’t just about one wife of a cop, of course–This is a systemic problem that requires systemic solutions.

Before the hearing, as folks were still coming into the chambers, I noticed Heather Hall came out into the audience area and handed Erin S. a chilled bottle of water, with no comment, before going back to her desk at the front of the room. Those weren’t on offer to anyone else. So it was clear before the hearing even started how Hall would be voting. Power is tight-knit, and requires substantive change to break it apart.

At one point I overheard one of the cop wife crew show another a news article on her phone. I could see the headline, “Springfield Police Officer Run Over Outside Headquarters, Suspect Shot.” She said to her friend, “I’m so sick of this shit.” My eyes dialed in on the words “suspect shot.” Yes, I wanted to say, I’m sick of this shit too, I’m sick of suspects, who, by definition, have not yet been found guilty of a crime, being shot by police. Probably not what she meant though, huh?

The committee recommended the ordinance to the full City Council (with only Heather Hall voting in opposition).

The City Council will hear the ordinance and likely make a decision, on Thursday, June 18 at 3pm. If you would like to comment on this or any proposed ordinances, you can email publictestimony@kcmo.org. The Council meeting is open to the public and also livestreamed at https://www.youtube.com/watch?v=3hOuBIg4fok.