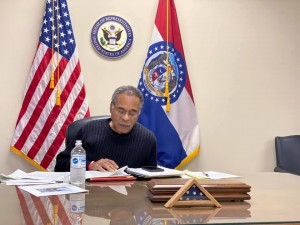 Just a few days removed from the gut-punch of being told a Missouri man was indicted for threatening to lynch him, U.S. Rep. Emanuel Cleaver said he’s now been told the man may eventually be released on bail.

Cleaver, a Kansas City Democrat, told The Independent that the feds informed him that although they’re looking to keep Marionville resident Kenneth Hubert detained until his trial, there’s a possibility he could make bail.

The issue will be debated at a hearing Monday in the U.S. District Court for the Western District of Missouri’s Southwestern Division.

But Cleaver said he’s not sweating it too much, because he was assured the government would take strict precautions in case Hubert does get released.

“They took his passport and he’d be wearing an ankle bracelet so they can monitor where he’s going, so I feel a little better with my family here,” Cleaver said. “I feel comfortable. Maybe a little less comfortable in Kansas City than I do in D.C.”

Theresa Moore, acting U.S. Attorney for the Western District of Missouri, filed a motion with a U.S. district court Friday afternoon to keep Hubert locked up until his trial because he has a history of making bigoted phone calls threatening violence and because he told investigators he only follows laws he wants to follow.

He was questioned by the FBI in 2019 after he allegedly called the office of U.S. Rep. Steve Cohen, D-Tenn., and threatened to drag him on a noose behind his truck, which Hubert told investigators was in response to a comment from Cohen to drag Trump out of the White House with a rope, according to the court paperwork.

On January 6, prosecutors say Hubert fired up the phone again, calling the Missouri Democratic Party and leaving voicemails threatening the same kind of violence that had happened at the U.S. Capitol that day. Hubert was contacted that day by the Marionville-Aurora Police Department and admitted to leaving the voicemails, according to the court filing.

Nonetheless, the next day he allegedly called Cleaver’s office, leaving a voice message laden with racist language and other obscenities, including threatening to hang Cleaver, a United Methodist pastor, with a noose.

Hubert allegedly told FBI investigators he was incensed by Cleaver’s opening prayer on the first day of Congress, in which he said “Amen and a-woman.” He also told investigators he had been contacted previously by the Secret Service for making comments about hanging President Barack Obama.

The FBI agent investigating the matter reported the Hubert had also been probed in 2014 for leaving threatening messages for a Montana judge following a same-sex marriage ruling, and in 2016 for making Islamophobic calls to the Council on American- Islamic Relations in St. Louis.

“The defendant’s history exhibits that he has a complete disregard for law enforcement and the safety and security of the community,” Moore wrote, noting that Hubert had described himself as a “right-wing nut job.”

“These repeated threatening communications,” he wrote, “made in defiance of law enforcement directives, exhibit that the defendant is a continuing danger to the community in general.”

Cleaver said he hadn’t been informed about the stated reason for Hubert’s harassment, but assumed it had something to do with the Capitol insurrection. But he said he feels he’s in good hands when it comes to law enforcement.

“The FBI has been amazing,” Cleaver said, singling out a Missouri agent he’s been working with. “He gave me his cell number and said if you need anything call me on my cell, don’t call the office, call me directly.”

Cleaver said he was informed recently that King, who is now housed at a Colorado detention facility, may be spending more time in prison. He will face one count of assaulting a government official while behind bars, which could carry a 20 year additional maximum sentence.

“She said, ‘Why are these people angry with you? You’re probably the nicest guy we have!’” Cleaver said. “And I said ‘I have no idea.’ I don’t know. It’s weird.”