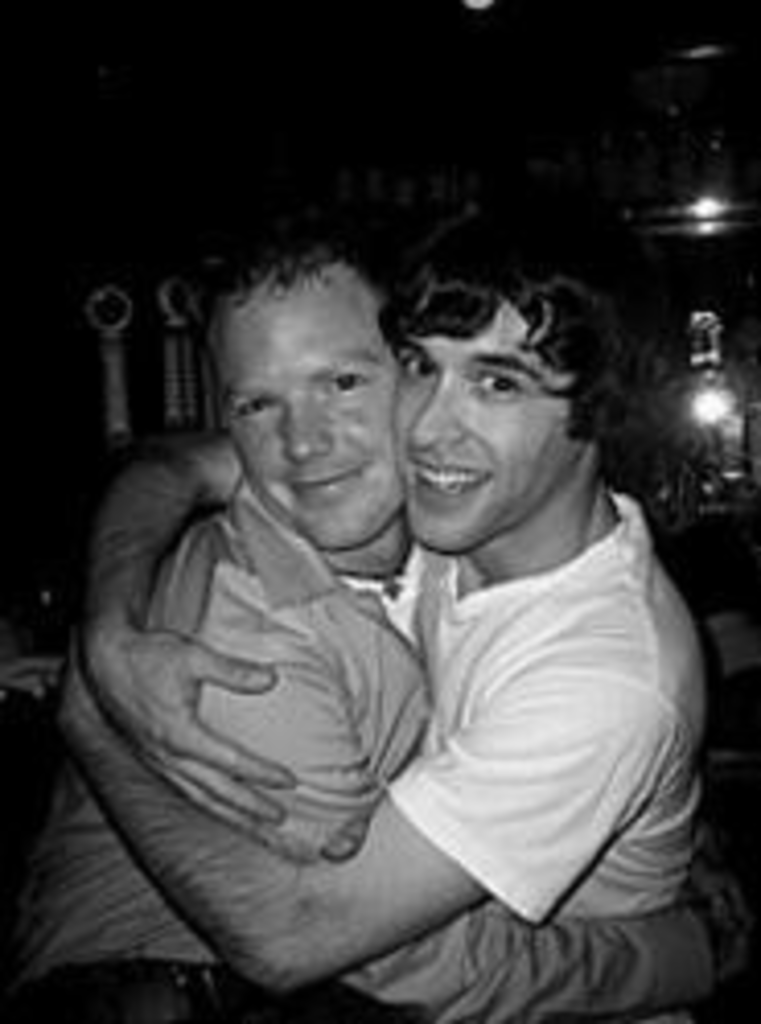 We’re always looking to fake holidays as an excuse for drinking, and that Hallmark-manufactured, heart-shaped occasion a couple of weeks ago fit the bill perfectly. Even though Valentine’s Day fell on a Monday this year, we wanted to celebrate by hanging out with some of our favorite Research Assistants at one of our favorite places: Harry’s Bar and Tables.

Why Harry’s? Well, we figured it was less likely that we’d be surrounded by smug couples, and we were right on with that hunch; on VD, Harry’s attracted a small but good mix of singles and noncheesoid doubles. However, the overriding factor for going to Harry’s was its awesomeness. Because of its central location, it’s a great people-watching spot. It’s usually laid-back (though its narrow main bar can get annoyingly packed on weekend nights) and has therefore been a favored first-date spot. We’ve also (discreetly) made out with various exes in what we like to deem its make-out room (the dimly lighted booth area linking the main bar and the patio, which gets virtually no traffic during winter months). We’ve celebrated birthdays there and have befriended the staff (whose members, in the interest of full disclosure, have from time to time given us free drinks; however, we’d like to emphasize that on our official Night Ranger expedition, we paid the bill in full). Really, to paraphrase Kenny Rogers: Through the years, it’s never let us down.

We went with RAs Laura and Tracey. The first few people we met were of the same mindset. At a neighboring table we spotted Miguel, 29, Jade, 28, and Chanoo, 28; they were constantly laughing as they lingered over appetizers and a bottle of pinot noir. This congenial trio is made up of IBM consultants for Sprint, and for the past year or so, they have been visiting KC every other week from Charlotte, Dallas and Detroit, respectively. They stay for about four days, then fly home. To us, that sounded like it’d be hell on any sort of relationship, but perhaps not. Miguel has been dating someone “off and on,” he says, for about two years, and the lively Jade is married.

“I don’t wear a ring,” she told us in a slight Filipino accent while holding up her left hand. “I told my husband it’s hard to carry luggage when wearing one. It’s true! I left it at home. Everyone knows I’m married, though.”

We asked how she and her husband met, and she told us they were on and off about five or six times. “We dated for six months but broke it off because, at six months, you either decide whether it’s serious and take it to the next level or break up. But we had a trip planned to Cancun [before the breakup], so we went and became friends with privileges.”

Ah, yes, the FWB goes hand in hand with two of our other favorite acronyms, the DD (drunk dial) and the DDBC (Drunk Dial Booty Call). With the increased usage of cell phones, the DD has become more prevalent — The New York Times recently ran an op-ed about the hazards of drinking and dialing, and Virgin Mobile has offered its Australian subscribers the option to block certain numbers from dialing out. (Best. Idea. Ever. Damn you, Sprint, for not doing this.) Anyway, we started talking about these topics with Jon, 25, Jen, 32, Mike, 26, and Lindsay, 27. All were single and — this being a KC urban tribe — had generally messed around with others in their social circle.

“How do you guys know each other?” was our lead-off question.

“I think they fucked,” Jen said, motioning toward Lindsay and Jon. We thought she was joking but weren’t really sure.

“I’m the queer one in the group,” Mike said. “You always have to have one.”

Jon, a friendly guy with a mop of dark, curly hair, and Jen, a funny blonde with a cool drawl, were “randomly hanging out” while Mike was waiting for a gentleman caller to show up.

“Is this a date/not date?” we suspiciously queried of Jen and Jon. Apparently it was; they told us they finally “had enough balls to want to see each other.”

“The guy Lindsay wants to date is picking her up in 10 minutes,” Jen informed us. “She needs to get over him. She needs to move on. Consistently, for two years, they’ve been sleeping with each other. Consistently, he’s been sleeping with other girls as well … they might hook up until he meets someone who is more attractive in his mind. He’s the biggest man-whore on the planet.”

“How did you all meet again?” we asked, trying to clarify the complexities of their group. Lindsay told us that the man-whore slept with Jen, and they all eventually met.

“I hated her,” Jen said. Just then, Lindsay got a call from her male slut and left. We asked Jen if she initially hated Lindsay because they were hooking up with the same guy, but she said no. “She was kind of an annoying cheerleader girl, and she was wearing a bad watch. It was a horrible, cheesy, small, gold watch. Do you know what I’m saying? You see a girl with a ponytail, kind of perky, and a small gold watch…. ” We understood her bitch-speak.

The talk turned to random booty calls, and Jon related what happened to him just two weeks before.

“I was on tour with Golden Republic and met someone in San Diego,” he said. “We exchanged phone numbers and e-mail addresses. The last e-mail I got from her was in December. She said she got a job as a flight attendant and can fly to KC for free. It was vague … then, she actually shows up! I was at home [and got a call]. She says, ‘I’m at the Brick.’ I said, ‘The Brick in Kansas City?’ It was kind of traumatic.”

“Did you sleep with her anyway?” Jen asked.

“No, that would have crossed the line,” Jon answered. “She was thinking about moving here and asked if there were any open units in my apartment building.” He added that while they hung out at the bar, she told him she was ready to move to KC to be with him. “That was too weird,” he said, which, to us, was quite the understatement. When he rebuffed her, she got mad and went back to the airport.

“See, if you had slept with her the first night you met, she wouldn’t have gone psycho,” Jen said.

Wow. All we could think was, we’ll drink to that.