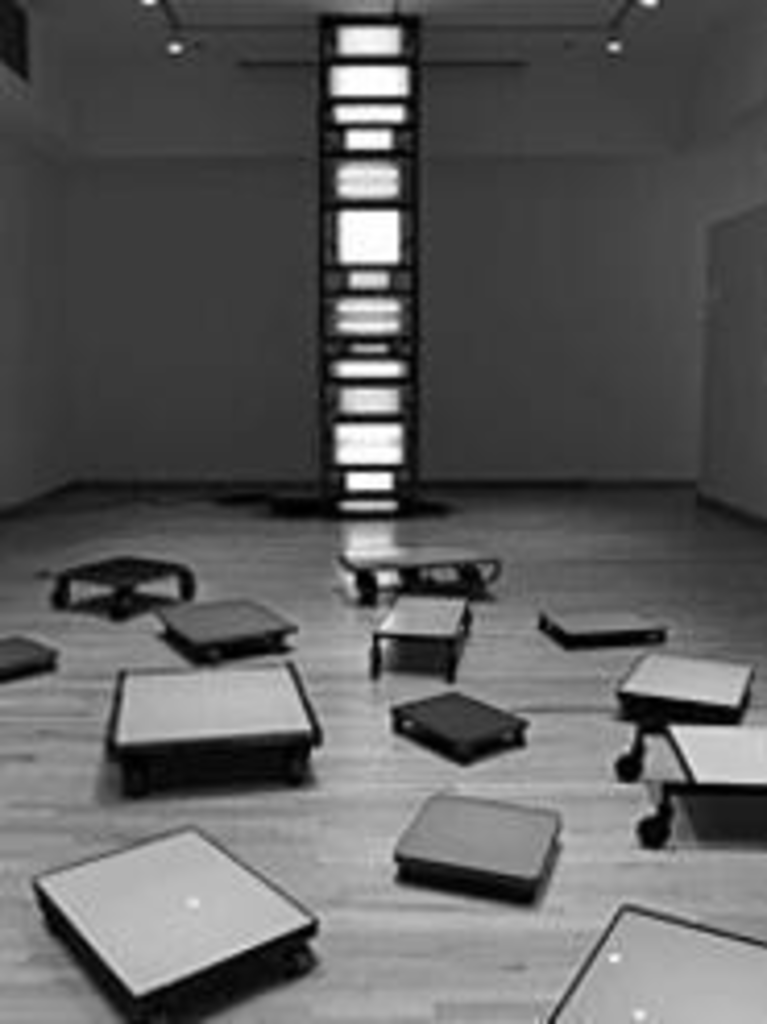 Colors are light waves. The length of each wave determines its color — red has the longest wavelength and violet the shortest. They bounce off an object and hit the retina of the human eye, creating the illusion of color. Colors assist society in its mundane functions: Red, green and yellow signals, for example, control the flow of traffic; on the handles of public-restroom faucets, red indicates hot water and blue signals cold. In board games like Sorry or Trivial Pursuit, each player chooses a colored piece to mark his or her place.

Yet color is imprecise. In ColorLove, now brightening the Johnson County Community College Gallery of Art, four artists use a variety of media to demonstrate the complexities of color.

When we close our eyes, we see a sudden flash of color. The image of the last thing we looked at lingers, then fades. Kansas City artist Mary Wessel’s photographs capture those transient colors, those fleeting shadows and highlights. Her pictures consist of abstract lights, darks and colors vaguely resembling things we’ve seen before — the spray of a lit fountain at night, photographs of moons orbiting planets, the glare of the setting sun on a camera lens. But they aren’t photographs of actual objects. Wessel began her series Blindnesses, she says, “with the idea that photography is not about something; it is something.” The images she creates are gradients of tones and colors caused by the movement of light filtered through colored plastic. Tides of intense, jewel-toned color — glowing violets, reds, ambers, greens, yellows, golden browns and black — ebb and flow across the photographic print. Wessel believes that color affects people in ways they are unaware of, ways that cannot be described with words. By playing with the medium of photography, Wessel demonstrates the impermanence and serendipity of light and the color it creates.

In Jeff Zimmerman’s Dream Sequence, glass sculptures sit arranged on a white gallery table like items in a space-age yard sale. Some pieces lie on their sides; others stand up, balancing on an end where the glass flares outward like the bell of a horn. The glass tubes stretch or bend away from these flared ends. Some form elongated spheres at the opposite extremity; others bulge into rounded ribs or pea-pod shapes. The sculptures’ exteriors are a dull white sheen. Their insides, though, sport an array of shiny pinks rivaling that of an OPI nail-color collection. Bubble-gum pink, orange pink, pale pink, hot pink — the hues differ from piece to piece. Visible through the broad funnel-shaped openings and thin holes sliced through the spheres and ribs at the other ends, the glitzy pinks make startling contrasts against the flat white outside. Zimmerman concentrates on pink, he says, because it is perfect. “Pink is so … punk. Porn. Petunia. Peaceful.” He points out the color’s power over a viewer’s emotional response: Pink can feel violent and disgusting or self-gratifying. (The gaping pink ends of the glass tubes resemble the blood-sucking mouth of the parasitical lamprey.) Pink can seem precious, coveted, expensive. (Zimmerman’s glass creations are reminiscent of an untouched pearl wrapped inside the soft, pink body of an oyster.) Pink possesses infinite possibilities for interpretation.

Linda Besemer creates a contrast between those elements of color that are structured and those that are uncontrollable. She applies unusual color combinations in structured grids of plaid — but these patterns and colors are too gaudy for even the tackiest of golf pants. Her paintings hang over aluminum rods like bathroom towels drying after a shower. This artwork is not absorbent, however; it’s made entirely from layers and layers of acrylic paint. Large, flexible and plastic, the paintings look as though they would melt if someone left them in a car on a summer afternoon in Kansas City.

In her artist’s statement, Besemer discusses the way color traditionally shows up in Western art. “Some color is OK, but it can easily become too much. The ‘proper’ recipe for the ‘good colorist’ is conditional upon taming color.” Apparently having little interest in being a “good colorist,” Besemer allows her color combinations to run wild — even though she lays on the paint in a nearly immaculate fashion. “Fold #55” consists of a yellow background with tiny red orange squares painted every quarter-inch. Thin dark green, aqua blue, hot pink, orange, lavender, fluorescent orange and dark blue stripes run horizontally and vertically on top of the squares; thick stripes run behind the thinner stripes in contrasting pink, blue, orange and purple. From up close, the stripes and squares have a depth to them — it is possible to determine the controlled and rigid order in which Besemer applied her colors. But the palette plays tricks on the viewer’s eyes: Stare at Besemer’s paintings too long, and the stripes begin to dance. “For me, the imprecision of color — its silence, its excess, its unpredictability, its decoration, the impossibility of its containment and its abstraction — is the exciting potentiality of color,” she writes.

Though it’s not part of the show, a sign above the door at the rear of the gallery emits a steady stream of pink light in the shape of the word EXIT. That pink is so electric it looks like part of David Batchelor’s color palette. Near the wall adjacent to this sign sits his piece “Electric Color Tower JCCC.” Using found metal materials, Batchelor has fashioned a tower of fourteen shelves, each holding a light box fronted by a different color of translucent or opaque Plexiglas. Each box contains, depending upon its size and shape, one, two or three fluorescent light bulbs. Behind the tower, electrical cords spill onto the floor like a pile of black plastic pasta. Old labels and pieces of duct tape remain affixed to the rough and dirty surfaces of Batchelor’s found materials. The word light, scribbled in marker on a metal piece of one light box, is left behind to make its ironic statement.

“Most of the color we now see is chemical or electrical,” writes Batchelor. “It is plastic or metallic; it is flat, shiny, iridescent, glowing or flashing.” Using rusty metal materials for the frame, Batchelor makes a sharp distinction between those found materials and new, unnatural, commercially available colors. “All my works are things with color rather than colored things,” he says; the objects are the vehicles he uses to show his colors. In “I Love King’s Cross and King’s Cross Loves Me, 6,” Batchelor paints a variety of colors — hot pink, fluorescent orange, lime green, magenta, fluorescent yellow, blue, red-orange and sea-foam green — on the backs of Plexiglas sheets. Combining Plexiglas once again with found materials, he displays the fluorescent hues as dollies on the gallery floor.

In both pieces, Batchelor sets up a complex relationship between the colors and the materials he uses to build the structures that display them. Rusty and covered with the occasional clumps of mud, the metal materials look as though they would benefit from some WD-40, but the paint is shiny, new and eye-catching. Batchelor considers all of it found material, whether he simply came across it or bought it. His work is a colorful new kind of ready-made.