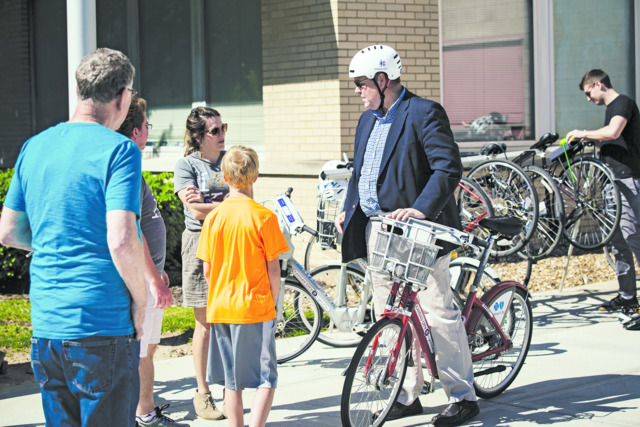 Last we checked on Kansas City’s perpetual and so far ill-fated quest to paint bike lanes on a handful of city streets, the potential for new bike facilities abounded. There were no guarantees, but city officials and bike advocates were hopeful that the KC would complete at least two bike-lane projects that have been funded for years — a downtown loop that includes Grand Boulevard, and Benton and Armour boulevards — by the end of the summer.

Well, don’t go shopping for that new helmet just yet.

Neither of those projects will happen this year, city leaders now admit — and whether they will happen anytime in the next two or three years is now firmly in doubt.

The complications come at a boiling point for the local bike-advocacy community. This past winter, a scathing audit led city leaders to scrap an antiquated bike plan and begin crafting a new, comprehensive plan to create and pay for on-street bike infrastructure that advocates have long said were sorely needed. That plan should be finalized by next March, and all sides appear content with that process. But as the summer wears on, the city’s bicyclist community is fuming at inaction by the city’s Public Works department on bike-lane projects that have been planned and funded, some for nearly a decade.

The bike lanes on Armour and Benton secured a Federal Highway Administration grant in 2010, and the Grand project won similar federal money two years later. In 2014, the feds again provided cash for lanes on the Paseo, Holmes, Lexington, Charlotte and Gladstone. All of those projects have been awarded city matching funds. None has been built.

While the more recent bike lane projects remain in the planning phase, others languish because of funding gaps created by federal contracting guidelines. Contractors so far say they can’t do the work for the money available, and the impasse has left advocates ready to scrap the current plans rather than wait for a solution to magically appear.

Members of the city’s Bicycle Pedestrian Advisory Committee are contemplating ways to pressure City Hall into either finding the money needed to complete the long-stalled projects or give back the federal funding altogether. Members of the committee worry that without that pressure, the bike lanes could remain mired in funding limbo indefinitely. If the city were to restart the funding process for the lanes using only local dollars, the new funding-and-bidding process could take as long as two years, the committee members admit. But that would at least be more certain that the undefined timeline to find contractors willing to paint the lanes under federal guidelines.

“When do we say: Enough is enough, let’s go back to the drawing board?” Eric Bunch, chairman of the advisory committee and head of advocacy group BikeWalk KC, said during a committee meeting this week. (Bunch has posted a full reaction to the setback here.)

The city figures Grand Boulevard should cost about $600,000 to stripe with bike lanes — costs that were covered completely by a 2011 federal clean-air grant worth $724,000, and a local pot of $181,000; the city had $530,000 left to spend on construction after project and design fees. But under federal guidelines, the prime contractor on the project must do at least 30 per cent of the work itself — and no one wants to do it for the price.

The city contractors who typically stripe the roads either don’t want to or cannot act as prime contractor on the bike-lane jobs. And the prime contractors for the project can’t actually put paint on the roads — that’s not what they do. To reach that 30 percent threshold, the only prime contractor that bid on the project, Gunter Construction, tacked on an extra $300,000 in fees; it was the only way it could figure out to spend the money. Both of Gunter’s bids came in at more than $900,000 — more than the city has to spend, and with no dedicated local funding to make up the difference.

Beth Breitenstein, a spokeswoman for the city’s public works office, says the city is continuing to search for ways to make the project more attractive to bidders. The city has asked the FHA for an exemption so that the prime contractor would be responsible for only 10 percent of the actual work. “We understand public frustration and we share that frustration,” Breitenstein says. “We will continue to include bike infrastructure as we plan capital improvement projects.”

Any committee recommendation to the city is essentially on hold for the moment while they wait for a response from the feds; who knows how long that could take. In the meantime, committee members are questioning whether it’s prudent to continue down the current, seemingly endless path, regardless of the FHA’s answer.

Even if the contracting issue gets sorted out and the work on the project begins — next spring at the earliest — advocates worry that the Grand Boulevard project will fail to do the thing it is supposed to do: give bike riders a safe north-south route through midtown. Since the city designed the project five years ago, bike-lane best practices have changed considerably. It’s clear now that a single stripe of paint on the road does nothing to encourage new or novice cyclists to ride on the lawless speedways that are Kansas City’s thoroughfares.

Protected bike lanes have become the industry standard now; they exist in nearly every major U.S. city now. If the city just paints an old-fashioned, one-stripe bike lane on Grand, will it then need to be replaced in a year or two if and when the city embarks on a more complete streetscape project?

“I’m not sure what the definition of wasted is now,” says Theresa Van Ackeren, a committee member and managing director of Family Bicycles in Waldo. Is the money wasted if the city turns it down and funds the projects alone? Or would the city waste the federal money by doing the minimal thing, painting simple bike lanes, then going back and doing it right months or years later?

There are other solutions, and they all involve money. There has never been dedicated bike infrastructure funding in Kansas City, despite the city’s own Climate Action Plan recommendation to do so. That recommendation, mirrored in last December’s bike audit, would dedicate 1 percent of the overall transportation budget to bike-lane construction and maintenance. At the advisory committee meeting, its members agreed to ask the city for at least that much every year to help implement projects outlined in the new bike plan once it’s complete. That would be $1.87 million from the city’s $187 million transportation budget for 2018.

It’s a good start, but not nearly enough to reach the city’s noble but farfetched goal of joining the upper-echelon of bike-friendly cities as judged by the League of American Bicyclists by 2020. In its bike master plan, implemented last year, Seattle has dedicated at least $64.4 million over the next five years to building out its bike infrastructure. Seattle and Kansas City are different places with different tax bases, sizes and so on — but still, KC is unlikely to come anywhere close to that level of funding.

Regardless, any budget could bridge the gap between the already-dedicated federal money and contractor bids and help make those long-delayed bike projects a reality. But the city has given no indication it will actually pay the money necessary to complete those stalled projects.

If the city does eventually accept Gunter’s bid and pay the difference, it’s a temporary fix, Bunch says. The federal grants have become a burden for the city and the bike community. It can’t happen again, he says. The city needs to provide dedicated annual funding from its own budget to ensure the bike plan, which it’s spending so much time and effort to assemble, actually results in roads cyclists can use. “It’s been too long for these projects,” he says. “It’s going to keep repeating itself unless we change what we are doing.”