How should the Kansas City Police Department handle militias at rallies? 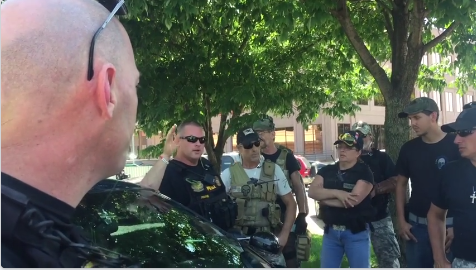 Over the weekend, several hundred people convened on the Country Club Plaza to protest white supremacy. The Plaza is a good place to do that. It was built by J.C. Nichols, a man who, seventy years after the Civil War, pioneered the use of restrictive covenants that prevented blacks from buying homes in his developments. The Country Club Plaza district is not the only part of town where this racist practice was implemented—Nichols built dozens of subdivisions and is more responsible than any person in the city’s history for the acute segregation that continues to this day—but that is where Nichols is most publicly memorialized, in the form of a prominent fountain that bears his name.

Looming ominously on the outskirts of Sunday’s demonstration was a group of well-armed individuals people wearing desert camouflage gear and Kevlar vests. This was not the National Guard, but instead members of the Three Percenters, a militia group whose stated goals are to protect the Constitution, reign in an overreaching government and push back against tyranny. Many of the Three Percenters in attendance reportedly came up from southern Missouri for the event. What they expected to occur on Sunday afternoon is anyone’s guess; they declined comment to the press on why they were there.

They did, however, speak freely with officers of the Kansas City Police Department. Here is a video, shared on the Kansas City Revolutionary Collective Facebook page, that shows two KCPD officers conversing with members of the militia prior to the demonstration. The officers talk about keeping the peace, and a Three Percenter says, “If there’s any type of altercation, we’re gonna go ahead and bring one of you guys into the loop, so that we’re on base, making sure trying to keep things squared up.”

There’s also this video, taken the same afternoon, of a Three Percenter saying that the Kansas City Police Department asked his group to attend the event.

KCPD spokesperson Kari Thompson tells The Pitch that “the statement made by the gentleman in this video is not true” and that “KCPD did not invite, collaborate, coordinate, nor strategize with this group.”

While none of the sentiments expressed in these videos are violent or convey anything other than neutrality about the nature of the protests—and it’s also possible the videos were selectively edited by the anonymous person who sent them to KCRC—there is nevertheless an undeniable coziness present in the interaction between the police and the militia members. Such dynamics are well-documented in other cities. During a protest in Portland earlier this year, for example, a militia member helped police arrest a demonstrator. According to a petition now circulating requesting that KCPD “keep militias on a leash,” the police approach to Three Percenters on Sunday was different than its approach to counter-protesters at a march in June.

“The Kansas City Police Department could have kept these counter-protesters [the Three Percenters, on Sunday] behind a police line, cornered off away from the crowd, as it did during a June 10, 2017 protest/counter-protest,” the petition states. “But instead the ‘militia’ was allowed to stalk the crowd…They were not present to protect the Kansas Citians gathering for justice for prisoners and people of color, as they absurdly implied in the press and to passersby. They came to intimidate, no doubt with some hope a protester would break a window or step out of line in some fashion so they could murder said protester and call it justified. The Three Percenters circled the protesters during speeches and then followed them on their march.”

Perhaps in response to a growing list of questions from news organizations like The Pitch, police chief Rick Smith this afternoon published a lengthy explanation of KCPD’s policy and procedures relating to protests.

“KCPD members will speak with anyone who asks them questions about the safest way to go about a demonstration,” Smith writes. “A contact is not the same as ‘collusion,’ which some on social media are alleging.
In fact, if police are aware of demonstrations in advance, we have a long-standing practice to reach out to event organizers days or weeks beforehand to give them a point of contact and trade concerns.”

He continues: “Commanders were on scene closely monitoring the situation on Aug. 19 to determine whether any greater levels of intervention might be needed. At one point, a confrontation did start between the two groups, and we used a low-level intervention—officers on horses—to separate them.”

That’s all well and good. But it may be time for KCPD to start thinking harder about its role in these situations. Missouri’s insane gun laws mean it is perfectly legal for heavily armed militia men to drive into Kansas City from another part of the state and ratchet up the tension at an otherwise peaceful protest. It may make tactical sense for KCPD to engage with them as a way of keeping the temperature cool. But that doesn’t mean KCPD should treat these guys like they’re part of the team. The city is safer without Three Percenters roaming the streets carrying assault rifles. KCPD should make that clear by informing these groups that their services are not needed.