How much good new pizza is there in KC? At least a very full week’s worth

It’s been a couple of years since The Pitch tried to eat all of the pizza in Kansas City. We needed recovery time, medical assistance. And we tend to be stubborn about sticking to old favorites. In the meantime, though, a few new pizza purveyors have opened (and, in one or two cases, closed), as though attempting to communicate directly with us via the universal language of flour, tomatoes and very pale dairy. Eat us, went the message.

Well, message received. We went back out to supplement our previous findings (“All the Pizza?” March 7, 2013), visiting the latest additions to KC’s pieline and reporting the results. This time, we tried to pace ourselves, sticking to one place (OK, maybe two) a day. (We’d say don’t try this at home, but you can try a different sort of odyssey with The Pitch’s pizza tour Saturday, June 25; see pitch.com for ticket information.) 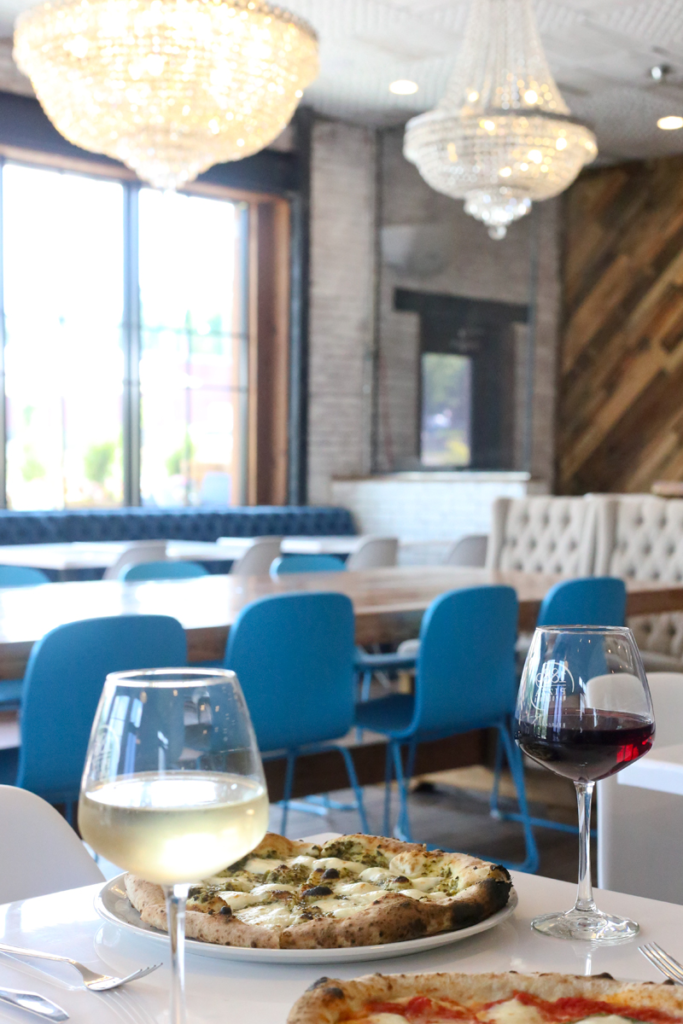 Today
1889 Pizza Napoletana
There are Instagram-ready restaurants, and then there is 1889 Pizza Napoletana. When the long-gestating restaurant at the 47th Street heart of Westwood-Rosedale’s boom-y food corridor started posting shots of its interior in recent weeks, The Pitch knew it had its cover model for a pizza story. So much marble, so much basil, so much tufted upholstery, to say nothing of the dual, copper-ornamented Acunto Mario Forni Classico ovens. It’s like Chef Boyardee’s house done up for Architectural Digest, at once precious, inviting and obviously all about pizza. (The name refers to this style of pizza’s supposed date of origin, a conceit that gets the full treatment here, from Lance Flores’ mural outside to Heckert Sheet Metal Works’ literal brand for searing pizza boxes.) But how can rustic little pizzas compete for attention against, you know, a Phantom of the Opera-size chandelier? For one thing, said pizzas can taste good — very good. Owners Jason and Kelli Kolich, running their first restaurant (she’s 29 and works in advertising; he’s 30 and studied business, like his wife, at the University of Kansas but has made Neapolitan pizza the center of his existence), seem to have cracked the code. They can tell you the usual facts about double-zero flour and San Marzano tomatoes, those cobblestones on the wobbly path to international certification, but what comes out of the Acuntos is amply rewarding on its own merit. The layout of the space is designed to usher each person along the stations of a pizza’s assembly, from dough to oven, emphasis on transparency and a certain theater. But be ready to wait a bit in line, because it’s hard to imagine that 1889 won’t be a hit when it officially opens Wednesday, June 22.
(2876 West 47th Avenue, Kansas City, Kansas, 913-608-5889, 1889pizza.com) 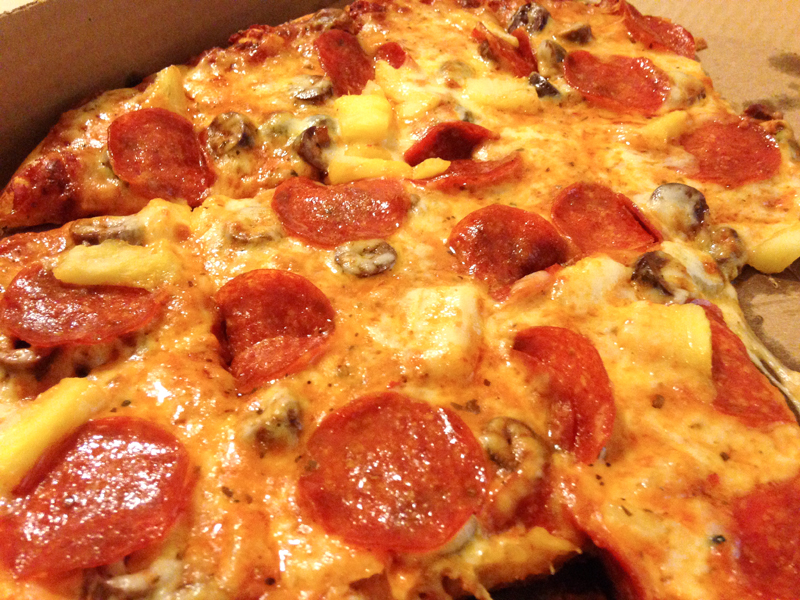 Late, late tonight
KC Kitchen and Pizzeria
It’s well after midnight, and you’re having a pizza emergency. You’ve had a long day, a longer evening, and you don’t remember what happened to the frozen cheapie you usually keep stashed in the freezer. The bars are closed — you know this because you were just there. What’s your plan, genius? Here’s the plan: KC Kitchen and Pizzeria, which recently materialized in the space once home to 24-hour dive Nichols Lunch, and which delivers until 3 a.m. (an hour later on the weekend). Midtown, Westport, the Plaza and downtown are all covered, and what arrives at your door, though pricy (you’d pay more!), is packed with hangover-fighting toppings. Every pie here should be called the You’re Welcome.
(3906 Waddell Avenue,816-599-4533, orderkckitchen.com)

Thursday
Grimaldi’s
For all the intended old-world charm in the phrase “Coal Fired Brick-Oven Pizzeria” — which rounds out the full name of this New York-centric franchise operation — Grimaldi’s is decidedly new-century suburban. So it fits neatly among the other party-of-10-ready restaurants that dot the living architectural rendering that is Prairie Fire. There’s a patio with an outdoor bar, and the indoor seating area is spacious in the borderline-anonymous fashion that dominates latter-day development. But the food has character: flavorful sauce, fresh-tasting crust, cheese with honest texture. The beer and wine lists are fine, and the salads satisfy. The place is also relatively inexpensive, with an 18-inch cheese pizza going for less than $20. Does it taste like something you could eat within sight of the Brooklyn Bridge? Actually, it’s better than a lot of that stuff, suggestive not of quickie slice shacks but of hallowed NYC tourist magnets such as Patsy’s. Impressive.
(5601 West 135th Street, Overland Park, 913-851-5062, grimaldispizzeria.com)

Friday
Long-Bell Pizza Co.
When this space opened a few years ago, it was a pizza place called Next Door, and the dining room was pretty literal in expressing that theme: lots of disused doors, painted various colors, and a strong neighborhood feel. The best of its pies gazed toward Chicago without coming very close to that city’s distinctive crust, but the menu was consistently tasty. More recently, the address has changed hands, the doors have been set aside, and the name recalls an era of rotary-dial neighborliness. (The namesakes are Robert A. Long and Victor Bell, who ran a lumber company; their pizza preferences are today unknown.) The pies now are thinner, the atmosphere still family-oriented but more bar-and-grill — you could call it Long Bro without necessarily being pejorative. There are Buffalo wings, so there are wing-strewn pizzas at the ready; pulled pork is also among the available toppings. Don’t overdo it, though. The hand-tossed crusts can support some weight, but the flavors emerge more easily when you keep things simple.
(3385 Southwest Fascination Drive, Lee’s Summit, 816-599-2234, longbellpizzaco.com) 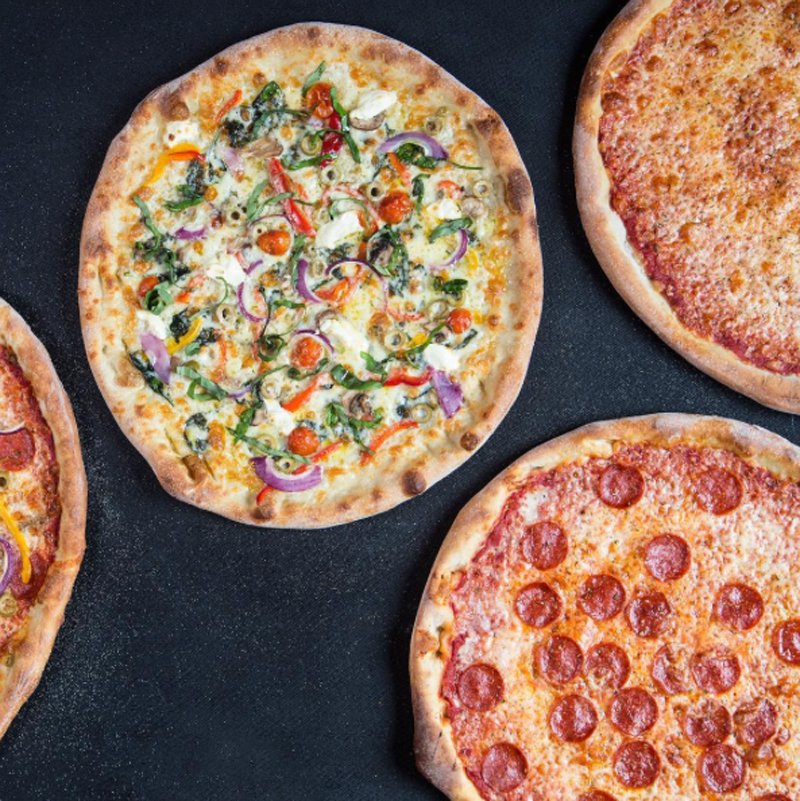 Saturday
Providence Pizza
How good is the pizza at Providence? Good enough to awaken your inner capitalist. Even Bernie Sanders might wonder just how much more money this place could make if it were open on Sundays. But it isn’t, so you’re here on a Saturday night, trying for the first time a place that’s been open just less than two years and looks to have caught on with the locals. Three chattering kids dig into whopping slices from a 22-inch pie their parents have ordered, and six unlikely seeming middle-aged tablemates try their best to run the place out of dough as closing time approaches. The counter service is peppy, and the tiled walls and wooden tables fairly gleam; but for the old brown flooring, you’d never know that this was once just another fast-food outlet on a stretch of highway frontage. (Old salts recall that it was a Long John Silver’s. There’s still a Captain D’s across the street for those who desire hush puppies.) Now it’s home to three styles of pizza, including what might be the best New York pie in the metro right now. The Neapolitan pies are almost as good, charred just so (if slightly too charred-tasting in places) and topped with suburban generosity relative to the puritan minimalism favored at other Naples-leaning outlets. The garlic knots glisten richly, the house-made root beer is a slumber party in a glass, and the tiramisu is made on the premises. In another sign of missed profit potential, however, one table tried most of these things — two pizzas, knots, a root-beer float, a cannoli — for about $45, including a couple of grown-up beers. Even Grandview doesn’t need to be this cheap.
(12925 U.S. Highway 71, Grandview, 816-965-0743, providencepizza.com) 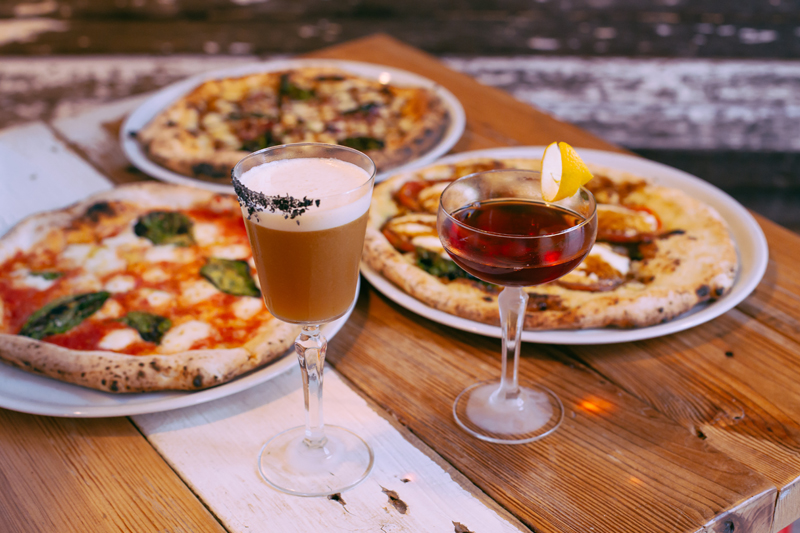 Sunday
Il Lazzarone
No one goes to Il Lazzarone for the service, which is still spotty enough to keep you waiting (at the host’s area, at your table, at the bar). You go — and you keep coming back — for chef-owner Erik Borger’s pizza, the good stuff that has been certified authentic Neapolitan by the American Delegation of the Associazione Verace Pizza Napoletana. There are so many things right at Il Lazzarone: a bustling patio, a solid beer list and, best of all, the wood-fired pizza. The sauce is sweet, and the crust is burnt perfectly. The hours are service-industry-friendly, with a kitchen that stays open well past midnight most days and till the witching hour on Sunday (making it one of the few spots around where you can get a late dinner on the Lord’s day). Pro tip: Ask for a cup of honey. Dip your crust in it. Leave satisfied.
(412 Delaware, 816-541-3695, illazzarone.org) 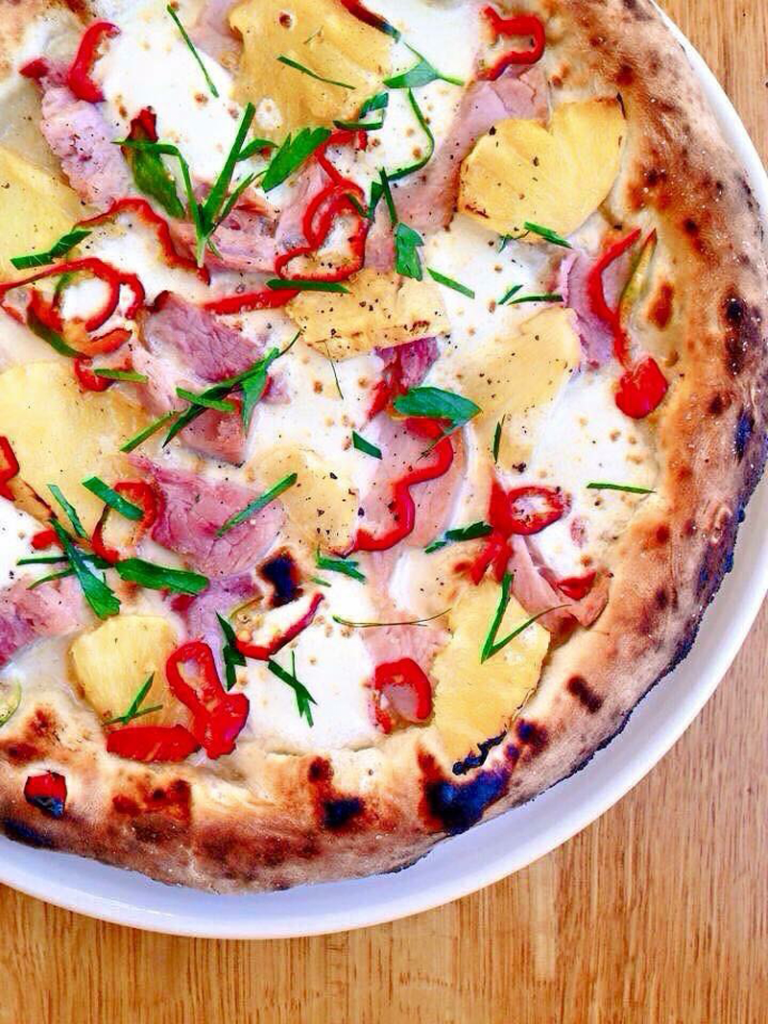 Monday
Limestone Pizza Kitchen Bar
A trip to Lawrence these days should leave time for at least a couple of meals, given how vital the restaurant scene has become in this college town. And maybe both of those meals should be at Limestone, which The Pitch called 2014’s best new restaurant, and which has only improved since then. The inventive menu is about more than pizza, but the pies are still the star: bubbly crusted, equally snappy and chewy, tangy. What reads faintly exotic on the page — the pie called Greens is Swiss chard, gruyere, reduced cream, gastrique and cracked pepper — arrives on the tongue as simple great sense. Appetizers here are labeled, with over-ironic modesty, “snacks” but are in fact essential parts of the Limestone food pyramid: cauliflower gratin, a good calamari, roasted root vegetables, each in a quantity that primes the palate rather than exhausting it before the best part. Which is, say it again, the pizza, a model of the form.
(814 Massachusetts, Lawrence, 785-856-2825, limestonepkb.com) 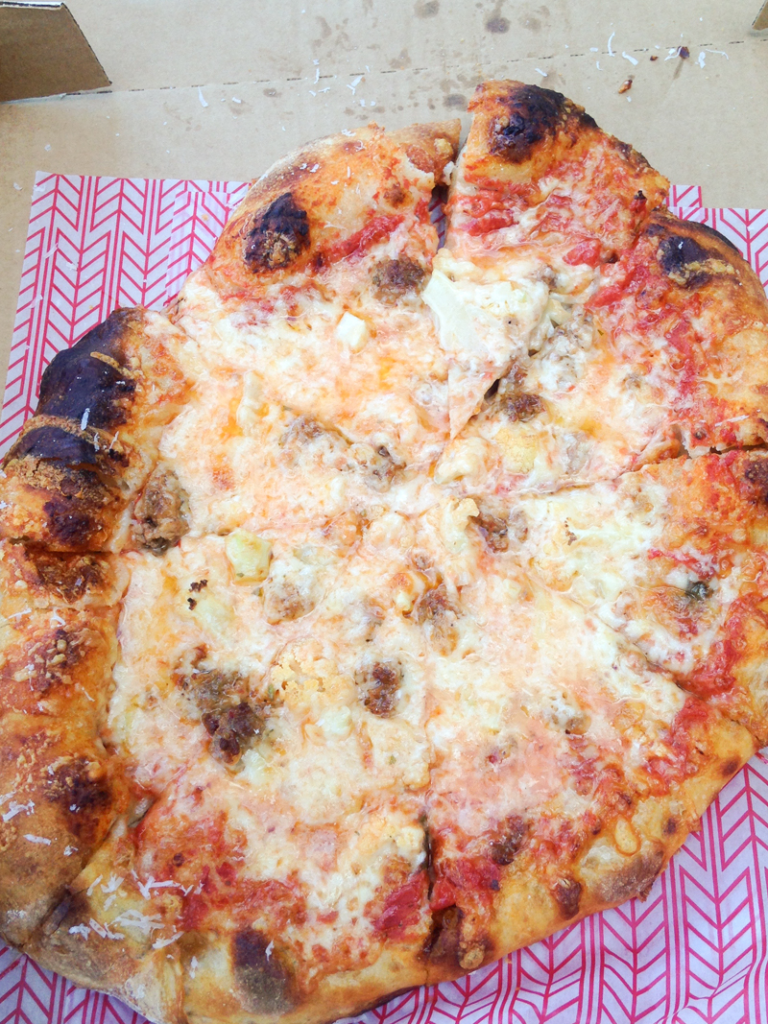 Tuesday
Ibis Bakery
There’s a two-hour window on Tuesday nights to order one of the metro’s best pizzas. From 6 to 8 p.m., Ibis Bakery transforms into a bustling pizzeria, and the neighboring Black Dog Coffeehouse swells with the happy spillover. Only during this short window can you get one or both of the specialty pies devised that day, made with local seasonal ingredients. (Keep an eye on Ibis’ Facebook page to know what’s on offer.) They, not you, choose the toppings. And they choose impeccably. On a recent night, one pie was Derr’s sausage, cauliflower and tomato sauce, and the other involved spring onion, kale, Swiss chard and cream. At $12 a pizza, it was a steal, providing enough to feed at least a couple of people. (This thing has “date night” written all over it.) The sausage pie had a golden, fluffy, crisp crust (made from Ibis’ wild-yeast starter) and satisfyingly gooey cheese. The sausage (from Wiener Wagon) wasn’t overemphasized, but the pizza was filling. Get here early. Even without a line, there’s often about a 30-minute wait — which gives you time to splurge on a mixed-berry-and-lemon Italian soda and scroll through your phone. (If squeezing your pizza love into 120 minutes on a Tuesday doesn’t fit your schedule, order a Sicilian-style pizza from nearby Four Seasons Pizza and Pasta, 7820 Quivira, Lenexa, any day of the week. It’s also a new-ish place, and it’s affordable and authentic, run by Italians Giulio Covello and Marino Moccia.)
(12817 West 87th Parkway, Lenexa, 913-669-9883, ibisbakery.com)