How do Sly James and Quinton Lucas really feel about each other? 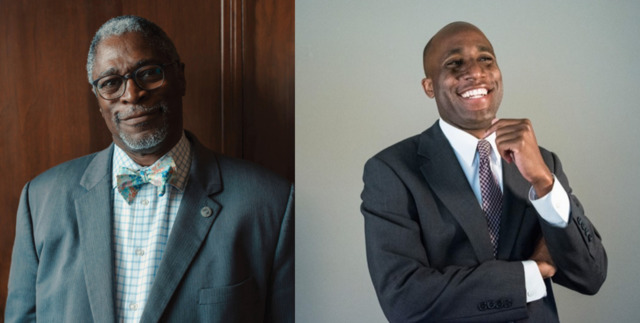 Past Kansas City mayors have been hesitant about endorsing successors. Not Sly James.

He endorsed Jolie Justus in March, when fully half of the members of the City Council were competing, along with others, in a primary.

And since voters in early April narrowed the field to Justus and Quinton Lucas, James has become more pointed.

“Don’t get swayed by the smooth and the slick,” James said at a dinner in his honor at the Golden Ox restaurant. “Recognize the real and the true, because we need to keep things going.”

He said something similar in early May in an interview with The Pitch.

“I know what this job entails,” James told me. “I’m in a unique position to be able to judge the people running and to know who fits the job description best. It’s not about appearances. It’s about substance.”

So, I asked, is James saying Lucas is more about appearances than substance?

I pointed out that James was elected mayor without holding a single elected office. Lucas is finishing a term on the City Council.

“You don’t have to be on the council to be ready,” James said. He rattled off a list of boards he served on and causes he engaged in before entering politics.

“I’ve been involved in various aspects of this city for as long as he’s been alive,” James said.

“That’s fine,” Lucas said, when I told him about James’ remarks. “He has a great deal more life experience than I have. He was older when he became mayor.”

But Lucas, who is 34, pointed out that James had no problem endorsing his friend Jason Kander when Kander ran for Missouri Secretary of State at age 32 and for U.S. Senate at age 36.

And he said James seemed to appreciate his experience four years ago when he doled out committee assignments. He placed Lucas on five committees, more than any other council member, positioning him to impact policy in areas such as housing, transportation and public safety.

It’s not surprising the James would staunchly support Justus. In 2006, when Justus was launching a campaign for the Missouri Senate, she phoned James, and he invited her to his law office for a chat. They have been friends and mutual political supporters ever since. She has pushed his agendas while on the City Council, sometimes at her own political risk.

But James’ comments, particularly since the primary, indicate not just support for Justus but some hostility toward Lucas. The mayor could not be reached for further discussion about Lucas, but two factors are likely in play.

First, Lucas has proven to be perhaps more independent than James might have expected or appreciated.

“I’ve actually taken a lot of advice from the mayor,” Lucas told me. “When I first got elected, he would say, ‘You know, kiddo, it’s very easy to be against something. It’s a lot harder to come up with something.’”

So, Lucas said, he has come up with ideas about economic development, general obligation bonds for infrastructure, tax increment financing, and transparency regarding the massive Kansas City International Airport terminal project. Many of those ideas found their way into ordinances.

The problem is, Lucas often positioned his ideas as alternatives to initiatives that James was already rolling with. To say the mayor did not appreciate the input is something of an understatement.

There’s also this: James is fiercely loyal to his friends, sometimes to the point of unreasonableness. The three incoming council members he was slowest to warm up to in 2015 — Teresa Loar, Katheryn Shields, and Heather Hall — all defeated candidates that James liked and worked well with. He may simply be angry at Lucas for having the temerity to take on Justus in the general election.

Whatever the explanation, Lucas is sanguine, at least publicly.

“I’ll always respect the mayor for his military career and his legal one, and his public service,” he said. “I’m not sure the mayor appreciates my contribution to public life. That’s too bad. I’ll just keep working my hardest.”