How did Odesza quietly become one of the biggest live music acts of the moment? A chat with Clayton Knight ahead of Wednesday’s KC show 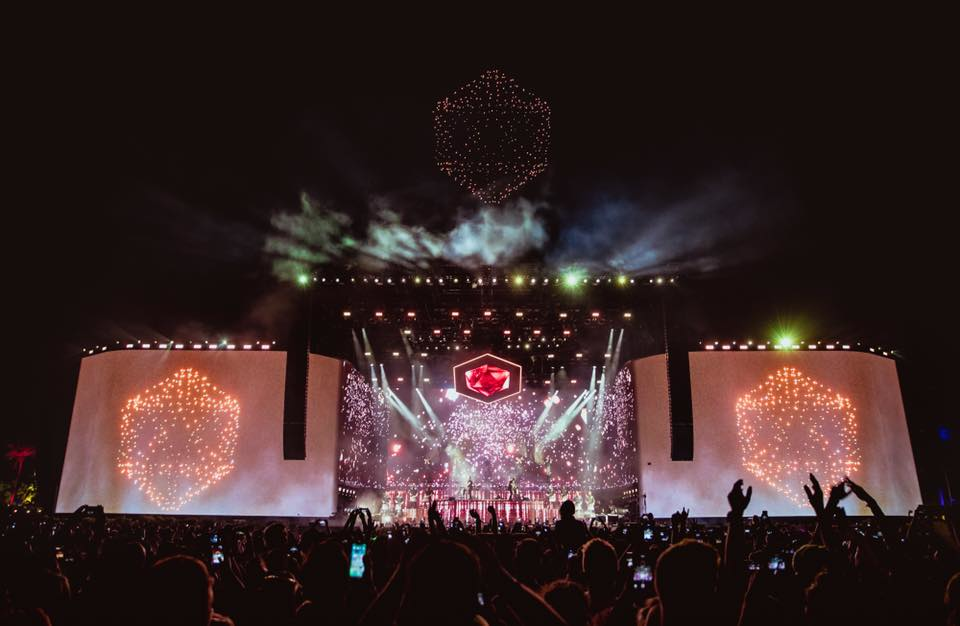 Despite not having any mainstream hits, the Seattle-based electronic music act Odesza has quietly managed to become one of live music’s biggest draws, selling out stadiums across the country and recently closing out the final night at this year’s Coachella festival. (It performed just before Eminem.) Odesza has managed this, in part, by creating massive, cinematic, visual and auditory spectacles to accompany its performances; in addition to its carefully choreographed cinematography and lighting, the band tours with a drum line and a full horn section. For its Coachella performance, it released dozens of programmed drones that soared over the crowd, pulsed with light, and formed giant, three-dimensional geometric shapes.

The duo brings its spectacle to Providence Medical Center Ampitheater this Wednesday, April 25. (Tickets are still available as of this writing.) The Pitch caught up with Clayton Knight, one half of the act, a few days prior to its KC performance.

The Pitch: You can really tell that visual art is very important to the two of you. How do you develop the production of the live show?

Clayton Knight: We’ve always had quite an important visual aesthetic that goes along with our sound. Even when we make music, we’re inspired by a lot of cinematography and videography. [For the live show], I have to put a lot of [the credit] toward our production team. Luke Tanaka has been a friend of ours since college — he is kind of the brains behind the visual stuff, as well as Sean Kusanagi, our creative director. They’ve spent a lot of time [on it] and we’ve put a lot of trust in their hands, and they’ve created a visual world.

We also try to incorporate as much live performance as possible, but there’s something really impractical especially as the technology has developed to where you can produce things in a really high-quality format. We just love to create that audio-visual experience; when they work together well, there’s not quite anything else like it. We want to keep focusing on expanding as technology changes. We’re in for the long run and want to keep pushing the envelope.

You mentioned film and cinematography being influences. What are some of the direct inspirations for the current tour?

Well, you can tell there’s an underlying science fiction theme that runs through the album as well as some of the visual art. We’ve always been huge fans of a lot of that stuff. But we take inspiration from everywhere. I’m a huge fan of Trent Reznor’s work in the video world, as well as the Inception soundtrack and the Arrival soundtrack. We love those cinematic, grandiose soundscapes that are created with visual elements and how moving they can be. We try to take those emotive feelings and put them into an electronic format.

Is there a story or a through-line to the performance?

There’s definitely an overarching arc, but we try to keep it a little more abstract. Especially with instrumental music where there’s no description of a scene or setting, it leaves the listener to find their own world. We like to lead people in a certain direction, but we want people to take it in their own ways and make the whole process impactful and personal.

It looks like there are a lot of people involved in the production, including a drumline. How big of a crew are you running with?

The current tour has a six-deep drumline, a brass section, Dean Harrison playing — so yeah, that’s a ten-piece band. Then the crew on top of that is another 20-30 members.

You’re sort of quietly one of the biggest live acts in the world right now. Has that sunk in?

I think because of the [Coachella] slot we were given, we felt the need to rise to that occasion. We don’t really have a big hit or mainstream recognition, and we did want to blow it out and take advantage of it as much as we could. As far as the response that had, I think it finally did really sink in. The last tour exceeded our expectations. We’re just really blown away by the response and we’re just really going to push to make this the best possible experience. We take a lot of time and put a lot of pride in the live show.

It’s really challenging now to create a live experience that’s unique. The one-upsmanship just rises and rises. How do you guys approach this challenge?

Well, we take it seriously and we incorporate a lot of ideas. We’ve been with this crew since the beginning of the project. I went to high school with Sean and we all went to college together. I think that tight-knit family has harbored its own little world. It’s allowed us to take these ideas and push them out in a unique way, as opposed to hiring the director that did Justin Bieber’s show. We’re doing it ourselves. That alone, I think, is where a lot of where the individuality comes from.

When you go to a show, what are you looking for?

That’s a good question. I don’t get to go to too many of them these days. Some of the most impactful ones I can remember, though, are ones that were not stagnant. A lot of electronic music can be stagnant, where there’s not a lot of ebb and flow. We focus a lot on building this theatrical experience with very dynamic moments. There should be open, ambient moments as well as garish moments as well as these cinematic ones. Having that constant push and pull, ebb and flow — that’s something we’re always looking for. It’s always shifting, it’s always building, it’s always breaking down, falling into itself and layering.