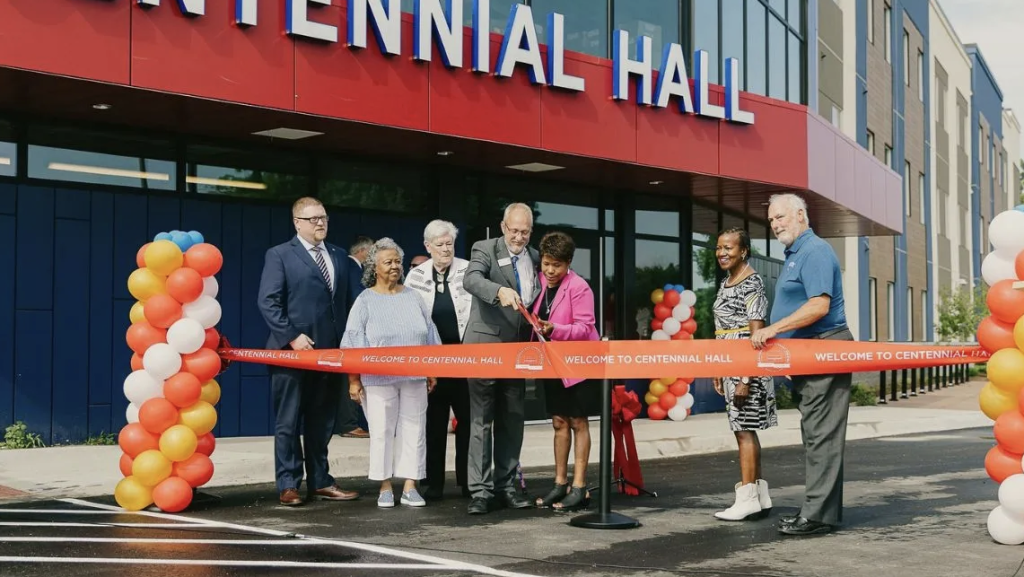 Greg Mosier’s first assignment as president of Kansas City Kansas Community College was to get student housing on campus. With trustee chair Evelyn Criswell, he recently cut the ribbon at a dedication ceremony for Centennial Hall, which will house 258 students. // Chase Castor/The Beacon

Community colleges traditionally have been commuter campuses. Fewer than one-third of the nation’s two-year schools have on-campus housing.

But on Aug. 12, 258 students at Kansas City Kansas Community College in Wyandotte County will move into a sparkling new residence hall. Named Centennial Hall, the building has been designed to offer students a safe learning environment, privacy and camaraderie.

“I think I’m most excited about building our community and getting to know people,” said Kaitlyn Bradbury, a second-year student at KCKCC who has been training to be a residential adviser at Centennial Hall. “It’s part of that college experience.”

Greg Mosier, the college’s president, said his school’s elected board of trustees named campus housing as a top priority when he took the job in 2018.

“This building is really meant to let our students know how much we care about their success,” Mosier said at the July dedication ceremony for Centennial Hall.

She graduated in 2020 from Piper High School, about a 15-minute drive from KCKCC.

Bradbury chose community college because it’s more affordable than a four-year school, and because it offered her a chance to continue playing softball at a competitive level. She could have commuted from home, but she wanted to be closer to her teammates, many of whom moved to Wyandotte County from other parts of Kansas or out of state.

For years, KCKCC has helped athletes and other students lease apartments in an aging complex near its campus. Last year, about 100 students had to be relocated because of a mold issue.

“At first I was put in a hotel and then I ended up having to move home,” Bradbury said.

Eventually, the school helped her find a different apartment. This school year, she is looking forward to less drama and more time to focus on her studies as a mass communications major.

“There’s less distractions. They’re not having to commute from home,” he said. “They’re able to be engaged in campus activities. That allows that focus on education.”

Rural community colleges in Kansas and Missouri have for years offered some form of housing for students who make their way to their campuses to participate in athletics or special programs, or who simply want an affordable option.

Residential accommodations are more unusual at two-year schools located in urban areas, like KCKCC. Johnson County Community College has no on-campus housing, and neither do the campuses of the Metropolitan Community College system in Kansas City.

With the opening of Centennial Hall, KCKCC has become part of a movement among community colleges nationwide to help students manage an ongoing affordable housing shortage.

Research has shown that students who are worried about having a safe place to stay in general have lower grade point averages than their peers and higher rates of anxiety and depression.

Community college students, who are more likely than students at four-year schools to come from low-income families and minority communities, cite the inability to pay for basic needs such as food and housing as a leading reason they abandon their pursuit of college credits and workforce credentials.

In response to the alarming enrollment declines — since the pandemic, community colleges around the nation have lost about 800,000 students — and a growing awareness of student needs, more campuses are looking into housing options. These include partnering with nonprofits or lobbying for state funds to build residence halls.

“We’re not a four-year school, we’re not a research institute that has thousands of dollars to do stuff,” Mosier said.

To fund the $20 million Centennial Hall project, Mosier secured revenue bonds that will be repaid over time with the fees students pay to live in the building.

Contracts for Centennial Hall call for students to pay $5,700 over the course of the fall and spring semesters. That amounts to about $630 a month, which is less expensive than the rents listed for apartments near the campus and includes utilities.

About 7,000 students enrolled at KCKCC in the 2021 academic year, so one residence hall won’t meet everyone’s housing needs. Children and spouses cannot live in Centennial Hall with students, and 140 of the units are reserved for student athletes, who find their way to KCKCC from around the nation and even overseas.

Most students will live in suites with four individual bedrooms and shared kitchen and bath facilities. The building has numerous gathering areas and study pods and a gaming and recreational area in the basement.

“I love that the dorms look like mini apartments,” said Elizabeth Daniels, who will be a student residential adviser. “It’s a big, wide open space.”

Daniels, a 2020 graduate of the Kansas City Kansas Public Schools’ Sumner Academy of Arts and Science, spent her first year at KCKCC at home, taking online classes for her business major.

The move to Centennial Hall will be her first opportunity to have a room to herself. At home, she shares quarters with a sibling.

She said she is looking forward to being one of the hall’s first residents.

“I really just wanted to be a part of this new experience for everybody,” she said.