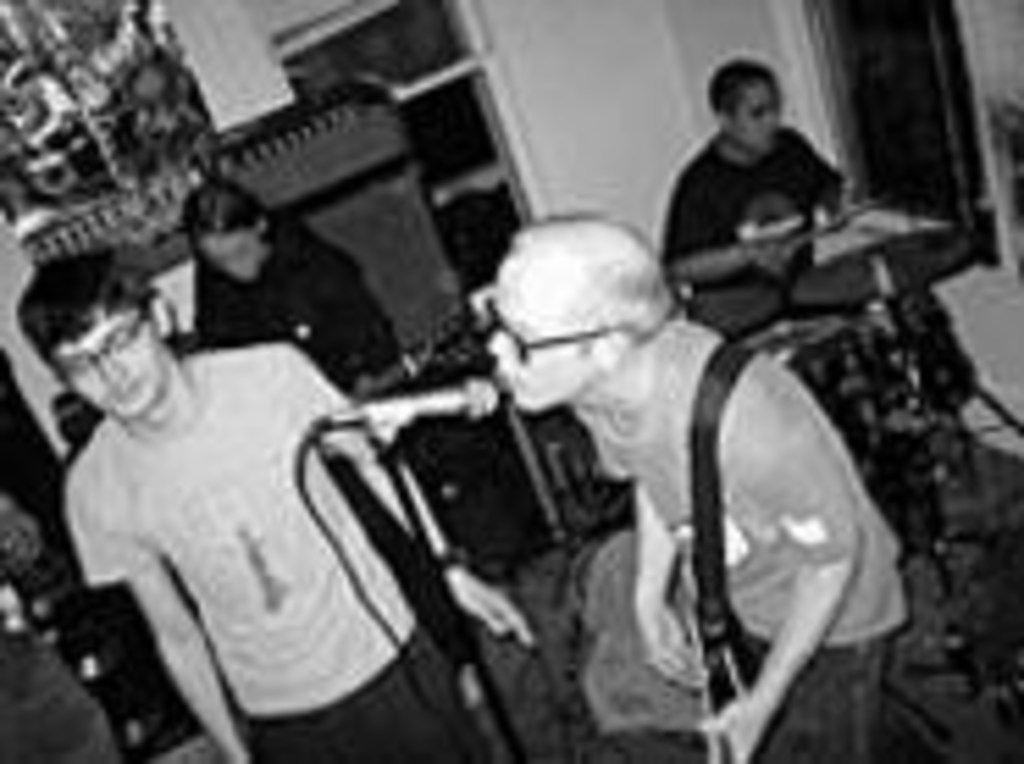 Viewed from the street, the Pink House, 1131 Tennessee, is nothing special: A nondescript, shrimp-hued dwelling located in Lawrence’s ragtag student ghetto. A handful of kids hangs out on the front porch, smoking cigarettes and talking music in hushed tones. Step inside, and it’s a whole different world. A throng of local music pundits are sweating it out in the living room with My Spacecoaster, a Dallas band known for relentless Midwest touring and scorching live sets. The music is loud but hardly deafening, though it certainly has plenty of impact at close range. There’s no mosh pit, no keg and a decided lack of ego. Instead, the audience watches in rapt attention while My Spacecoaster pile-drives with glee.

“It’s more intimate than a club,” observes Pink House cofounder Fadil El Mansour. “You have the band in front of you as opposed to two feet above you, and the band can actually intermingle with the crowd and all that. So it’s a nice mixture of the crowd and the band at the same time. There’s almost no line between the two.”

“Our goal is to get people involved,” El Mansour adds. “What we expect from the crowd is for them to go there for the music and to actually watch the bands and exchange information about music. The party crowd just goes there and drinks and hangs out outside and attracts other people who just think it’s a party,” he says.

For years, Lawrence has enjoyed an on-again-off-again relationship with its house-show scene. At its peak, the legendary Pirate House hosted a regular series of well-attended concerts, booking touring acts from around the country and cropping up in national databases such as Pollstar. Though the Pirate House has struggled in recent months, a new generation of live-music abodes has helped fill the void. The Pink House, the Halfway House, the Chocolate House, the White House and the Love House are just a few of the off-the-beaten-path venues hosting rock shows these days. For local bands, the benefits are obvious: an intimate setting, an appreciative audience and a few bucks at the end of the night.

“It’s way better than the Bottleneck,” enthuses Mark Sanders, guitarist for the Plot to Kill the President. “We hate playing the Bottleneck. We’re actually trying to never play it again — just house shows and maybe the Replay. The all-ages thing is big with us. We were playing the Replay, and we got a chance to play the Halfway House the night before, and we took it because we knew that not a lot of kids could come see us at the Replay.”

The Plot To Kill the President is just one of the numerous Lawrence outfits that have benefited from this subterranean scene. Bands such as Santo Gold, Ghosty, Salt the Earth and Jose PH were practically spawned there, learning the ropes and building grassroots followings that later followed them to “official” venues. And while most of these groups have become solid club draws, they’re still likely to be found playing house shows, where anything can — and does — happen. A recent gathering at the Halfway House featured an impromptu jam that included the complete lineups of Santo Gold and TPTKTP, a pairing that had local fans buzzing for weeks.

“The people I’ve seen at our shows are usually people who are really into the music scene,” explains Pink House cofounder Peter Berard. “Either they’re in bands or friends of bands or really into the music. We have a really good thing here, even if it may not always seem like it compared to other places.”

Jen Stimple couldn’t agree more. The KU theater major and Iowa transplant knew nothing about the area music scene when she relocated to Lawrence last fall. Unable to attend shows at 21-and-over venues, Stimple stumbled onto the house scene by accident, an experience that introduced her to a variety of new sonic possibilities.

“I don’t think there is a local scene in Des Moines, Iowa,” Stimple jokes, quickly adding that she’s not a Slipknot fan. “I grew up having to listen to Top-40 radio stations and MTV, and I had no idea that there was local music. I wasn’t happy with the music selection that I had. So when I came here, I just couldn’t believe it. There’s so many shows. It’s been a really great learning experience.”

El Mansour, who relocated from Morocco to attend KU, had a similar awakening. “I just discovered this whole thing like six months ago,” he marvels. “This may be the biggest discovery I’ve ever made as far as music. They have a really little scene in Morocco, and I thought it was the shit. Then I came here, and it’s like, these bands are just perfect. I don’t need to look around anywhere else.”

Fans wanting to learn more about the area’s musical offerings increasingly have found their way to the Pink House’s Web site (www.lawrencerock.com). Launched last October to help promote the House’s first show, the site is now home to a handful of local bands, music critics and other cultural observers. Lawrencerock also hosts a exhaustive fan page for the Appleseed Cast that includes everything from a full listing of recording gear to bass tablatures and even a poll to select fans’ favorite moment from Low Level Owl 1 (the winner: “Steps and Numbers”). These and other online goodies have helped bring about 200 visitors to Lawrencerock every day.

Many of those faithful gather in Lawrencerock’s forum, which has the usual blend of heated debate and blowhard hubris. Some posters have taken the site to task for its limited artist roster and for playing favorites. According to Berard, Lawrencerock was never intended to be all-inclusive or even particularly objective but was meant rather as an outlet for fans to learn about local music and express themselves. As the site’s content has grown, it has added more critical voices and expanded into theater, art, poetry, film and current events.

“It was only that way [originally] because those are the bands we knew. That was the music we were into,” Berard explains. “But we’d put any band on the site, we’d definitely like to host more. With the Web site, we try to help the other local bands as much as possible.”

My Spacecoaster finishes its set, and the crowd flows into the kitchen, where a makeshift merchandising table receives a steady stream of business. The front yard fills quickly with those looking to take a breather between sets, but revelry is kept to a minimum. This, of course, helps keep away the cops and minimizes grievances from nearby residents. After all, few landlords are willing to stomach the potential headaches that come with hosting house shows.

“We’re renting from a management company, so they don’t really know,” El Mansour explains carefully. “The only problems we’ve had were with the neighbors, but that was just one show. Then we started taking measures to avoid that.”

“We’re not doing anything that’s in violation of our lease,” says Pink House resident and cofounder Dave Best. “I guess if they don’t like it, they could try to make trouble.”

The Pink House’s fate — and the destiny of the house-show scene — depends on its ability to avoid trouble. It will also be determined by the selfless attitudes of fans and musicians who keep it going, thriving under the club radar.

“No one is interested in making profits,” Vacek affirms. “We put all our effort into it to help out musicians — help them put their music out there, give them more opportunities to be creative and to create, which is what the whole point is. It’s just such a pure cause. It would seem like a terrible epilogue to become paid promoters who just whore out their connections.”