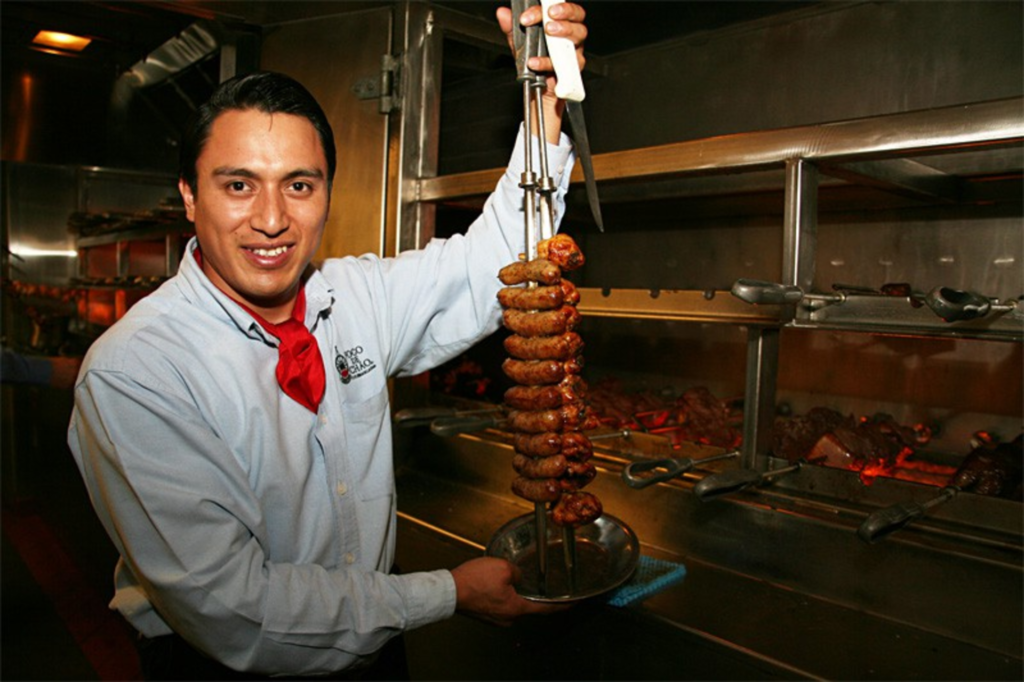 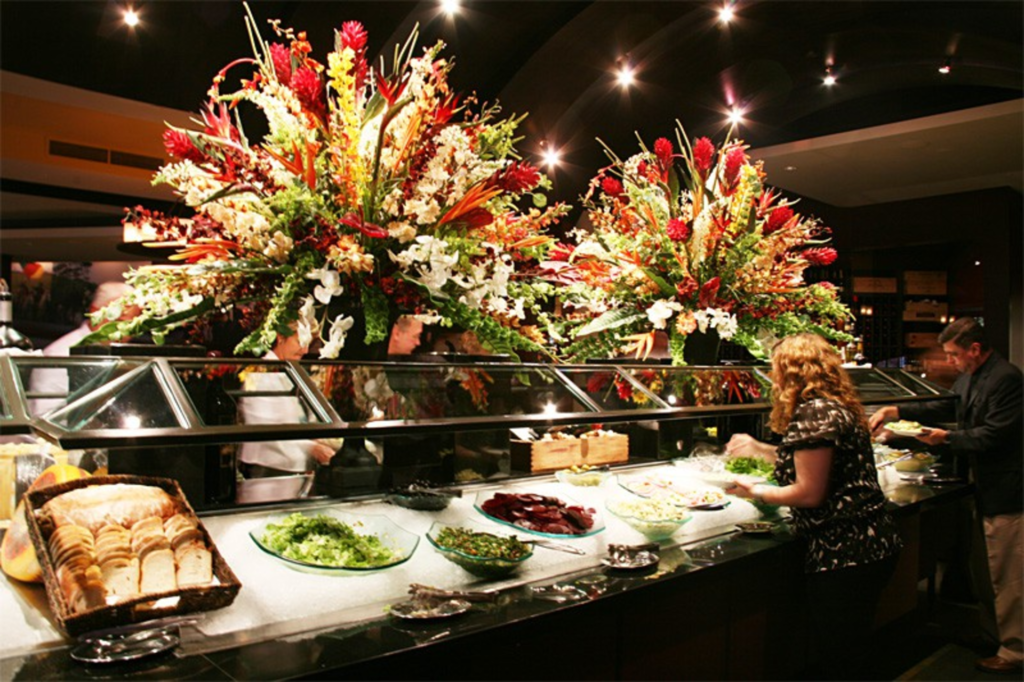 My friend Cathy thinks that Fogo de Chão, the Brazilian churrascaria on the Country Club Plaza, should remove the display rotisserie that rotates theatrically in the show windows west of the restaurant. There are real flames, and meat appears to be cooking (it’s actually fatty beef that would have been tossed out), but Cathy is hungry for a different sight.

“They need to put some of those gorgeous men on the metal skewers in that window,” she says. “Preferably sweaty and shirtless.”

The men she’s talking about are the narrow-waisted, good-looking passadores — most of them natives of Brazil — who dash through the dark dining room at Fogo de Chão, wielding long metal skewers impaled with juicy, dripping, succulent hunks of roasted beef, chicken, pork, lamb and sausage. The men dress like gauchos and, with a couple of exceptions, look like swarthy old-Hollywood heartthrob Tyrone Power in Blood and Sand.

That salad bar is actually a show in itself. Located in the center of the dining room and topped with two flamboyant floral creations, this festive fantasia of chilled delicacies includes fresh greens and the expected toppings. But there also are slices of fleshy, pink smoked salmon; firm rods of ivory hearts of palm; milky mounds of fresh mozzarella; and thick phallic stalks of marinated asparagus.

Before our group had finished eating salads, the passadores noticed that Cathy and Dan had unwittingly turned the little round cards at their place settings — they thought they were coasters — from the red side to the green. Like marauding gladiators, they stalked over to our table, skewers drawn like swords and, one by one, began to unload glorious cuts of meat: bacon-wrapped filet mignon, rib eye, sirloin, young leg of lamb, slow-roasted pork ribs.

Using the little metal tongs at our table, we could neatly assist each passadore by plucking pieces of meat as he expertly used a dangerous-looking knife to slice off sections of gorgeously roasted lamb or beef. You want a rare slice? The passadore cuts right into it. Medium rare? It’s there, too.

When Cathy wasn’t flirting with the meat servers, she was noting the sensual qualities of the side dishes — a quivering mound of mashed potatoes, the caramelized and slightly flaccid bananas. “They’re too sweet,” Cathy said. “But the texture is really nice. Something soft and creamy is a nice counterpoint to all this juicy red meat.”

My own head was spinning by this point, and I was the first at our table to flip over my round card from green to red. I had eaten more meat in the first 20 minutes of the meal than I typically eat in a week. Those passadores come at you with the intensity of starving mosquitoes; before you’ve looked down at one piece of meat, another server is there brandishing a skewer of something different, urging you to take more.

While Cathy, Dan and Franklin savored their dinners, I looked around at the busy, bustling space. Fogo de Chão is one of the costliest restaurants in the city — dinner is $42.50 and doesn’t include drinks, gratuity or dessert — but the dining room was full on a Thursday night. Most of the patrons were men, including a big party of broad-shouldered guys in town for a convention. “We get a lot of tourists here,” confided one of the servers. “They want steak, but they want something different, too.”

The desserts are as oversized as everything else in this restaurant (except the wine and cocktails, which looked like stingy pours). Cathy and Dan shared a flan as wide as a saucer, and Franklin devoured a big slab of chocolate cake layered with creamy mousse. That did it for Cathy and Dan, who loved the restaurant but weren’t sure if they would come back: “It’s sort of wretched excess,” Dan said. “Don’t you think?”

I was thinking, actually, of Voltaire. After visiting a male brothel, he reportedly admitted to having had a good time, but explained he could never return. “Once a philosopher,” he said, “twice a pervert.”

I didn’t feel like a pervert, exactly, returning to Fogo de Chão for lunch — a glutton, maybe. This time I opted to skip the, uh, meat service in favor of the salad bar. My friends Truman and Georgina went for the whole shebang and ate too much.

“This isn’t a place for ladies to eat,” Georgina said, as she cut into a block of garlic-seasoned sirloin. “It’s for big hulking teenage boys.”

She nodded toward a table of five: a father, a mother and their three muscular offspring. Georgina also couldn’t stop watching a skinny hippie type in Birkenstocks and puka shells — I would have pegged him as a vegan — who effortlessly polished off five, six, then seven plates of meat. “I’ve never seen anything like it,” she whispered. “He can’t stop eating.”

He didn’t look the part, but that man was precisely the kind of customer who gets his money’s worth out of Fogo de Chão. The rest of us were ready to wave the white flag — or the red circle — after the first round of roasted meats and potatoes and fried polenta and baked bananas.

Truman, who hasn’t had a date in a while, had approached his meal with great passion. I was surprised by how much he could eat that day. “I don’t know exactly who said it,” he announced, spearing a hot banana with his fork, “but I agree with the quote that goes, ‘Food has replaced sex in my life. Now I can’t even get in my own pants.'”

At Fogo de Chão, despite the steamy undercurrents, it’s perfectly fine to replace the fantasy of intercourse with the waking dream of endless cooked flesh. In fact, that’s what this restaurant is all about.