Hospital Ships are on the move — literally and figuratively 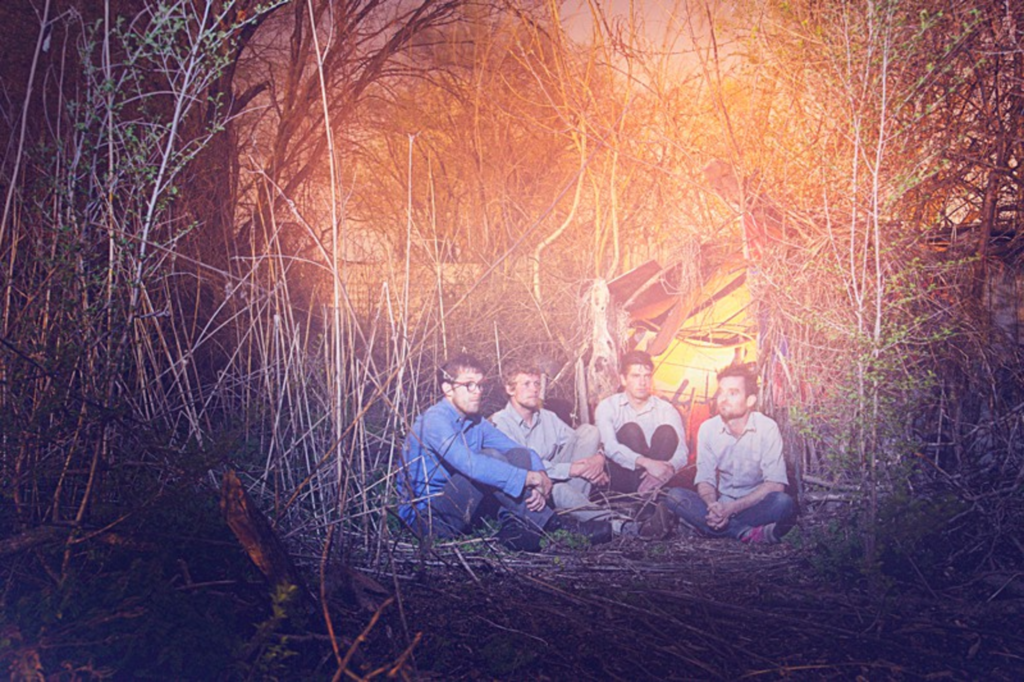 A decade or so ago, shortly before Jordan Geiger joined the Lawrence post-rock group the Appleseed Cast on keyboards, the group did a West Coast tour opening for emo icons the Get Up Kids. The hope, as with all opening acts, was that an established group like the Get Up Kids could help expose a fellow local band like the Appleseed Cast to new fans.

A few weeks ago, Geiger returned to Lawrence after another West Coast tour with the Appleseed Cast. He’s no longer in that band, though. On this trip to the Pacific states, the Appleseed Cast was the established group, and Geiger’s current band, Hospital Ships, was the one hoping to capitalize on its fanbase.

“The crowds were really big, and they were really welcoming to us,” Geiger says in the living room of his Lawrence home, a bowl of roasted vegetables in hand and his beloved white cat, Marshmallow, not far from sight. “It [The Appleseed Cast] has a very loyal fanbase, and I think they know that [lead singer and co-founder] Chris Crisci brings mostly bands that he loves on tour. So they were really open to the band that opens up because they know that there’s a connection there.”

Geiger describes Crisci and other Appleseed Cast members, both past and present — Hospital Ships’ guitarist-vocalist Taylor Holenbeck and drummer Nathan Wilder are members of the Appleseed Cast — as mentors when it comes to touring. “I wouldn’t be doing music still without him or, like, have known how to keep going,” Holenbeck says of Crisci. (The two musicians also worked together in the group Old Canes.)

“If you’re big enough to make it out of Lawrence and tour, then you try to help your friends out,” Geiger adds.

For the time being, Geiger, Holenbeck and Wilder, along with bassist Nate Dixey, are closer to home, where they play a June 13 show at the Replay Lounge in support of Hospital Ships’ third album. Ahead of its June 18 release, Destruction in Yr Soul has already snagged accolades and critical acclaim from Pitchfork and Stereogum for the epic, high-energy indie-rock track “If It Speaks.”

It seems possible that Destruction in Yr Soul could connect with audiences in a broader way than previous Hospital Ships albums. Well-known sound engineer and producer Ed Rose recorded some of the tracks (Geiger did the rest inside his Lawrence home); Grammy-nominated John Congleton, a friend whom Geiger calls a “fancy-pants producer,” mixed the album in Dallas. It’s being released by Graveface Records in Savannah, Georgia. The label is helmed by Ryan Graveface, whom Geiger describes as an artist-friendly person interested in “making things that will last and that you would want to last forever. He’s pretty much a huge supporter of the band and lets us do whatever we want, within reason.”

For example: the group’s recently released video for “Servants,” a six-minute, avant-garde mix of flamboyant costuming, food-colored corn syrup and homoerotic battle rituals. (One viewer on YouTube summed it up pretty well: “I feel sticky now.”) Andy Byers, who received his undergraduate degree in ceramics from the Kansas City Art Institute, directed the video and constructed most of the costumes.

“I don’t remember exactly what was going through my mind leading up to it, but I just kind of had this flash of an idea one night,” Geiger says. “‘Servants’ is a song about feeling defeated at the state of the world and wanting the end of the world to come, [which is] a theme that’s recurring throughout Destruction in Yr Soul. I wanted the video to be beautiful, uncomfortable, disgusting, funny — all of those things.”

Since the release of Hospital Ships’ first two records, Geiger has traveled a lot, touring in the band Shearwater and living in New York; Austin, Texas; and Columbus, Ohio. Settling back into the Lawrence scene, he felt a sense of relief, he says. He could slow down a bit and work more with others on a well-polished final product.

“You can’t write a record and have a band without consistency, without practicing, without seeing each other, without talking about the ideas,” Geiger says. “I hadn’t had that for years, and so, it was really nice to be able to build that. I mean, it’s just as much about building a relationship between the people as it is the music, allowing, hopefully, everyone to have their say and influence in the music.”

The Lawrence stay isn’t for long. In two weeks, Hospital Ships departs for an East Coast tour. Pitchfork love hasn’t yet made touring any less of a grind — “$100 to $150, if you’re lucky,” he says of the upcoming gig paydays.

“But it’s super-important,” Geiger adds. “I love recording and I love playing music, but another thing I love is traveling. I love playing music in other towns and stuff, but most of touring is traveling. You just see crazy shit because you’re in weird situations constantly. For instance, the van got broken into, but then, like, two days later, we were sailing in the harbor in San Diego. It was one of the most beautiful days I’ve ever seen.”

But is Lawrence where Hospital Ships ultimately wants to stay? Geiger smiles sheepishly. Yes, Lawrence has been a great home for many years, but the band is moving to Austin in the fall.

“It seems like a really good opportunity for the band, like a larger bubble to throw ourselves into,” Holenbeck says of the move 700 miles south. “Also, we’ve gone down there a lot in this last year, and I’ve been falling in love with it.”

The new Hospital Ships record “is just the tip of the iceberg of this lineup,” Geiger says. “I think the next thing we do is going to be even more weird and sprawling. I just want to stretch out and get weird on the new stuff.

“I’m not really sure what the future holds,” Geiger says. Holenbeck chimes in softly, “But who is?”