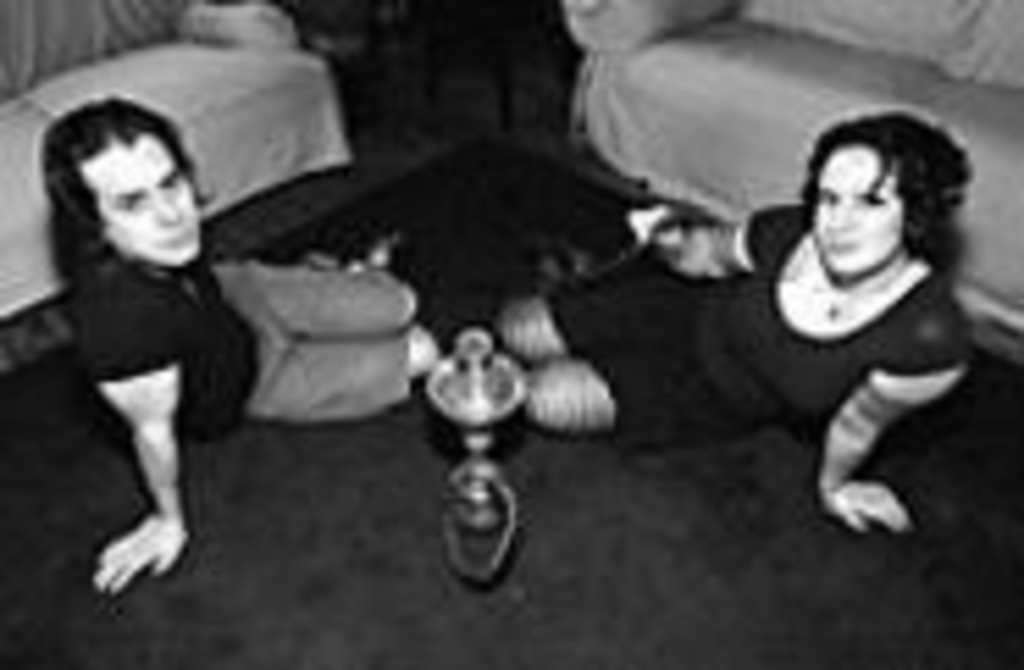 Hector Casanova and Renee Laferriere, who own the Green Door Gallery, have one of those apartments in which everything looks deliberate. Colorfully packaged bottles of hot sauce line a kitchen shelf. Cabinets have been made out of salvaged wood doors, sawed to fit. To test discerning eyes, there’s the horse sculpture by Laferriere that’s mounted on the living-room wall; close inspection reveals that it’s actually an arched human foot with toes made to look like a big set of equine pearly whites. Casanova’s seductive black-and-white drawings hang above a doorway.

The walls are painted a deep olive, and everything else is burgundy or red — most of the paintings; the big, square rug between the sofas; the flowers hand-stenciled onto rice-paper lanterns. Even the hookah hose.

The hookah is a beautifully engraved, pressed-tin number with a dark-red hose and a cherry-stained wood mouthpiece. Capped by a hand-pinched clay bowl, it sits in a place of honor on an end table under a canopy of huge, healthy, green plants.

The scraggly stoner college kid who managed to scrape together funds for such an item would probably turn around and conceal it somewhere sneaky, almost certainly in a hiding place within a hiding place (shoebox under the bed?). Casanova and Laferriere wouldn’t dream of that. They chose this hookah because it matched their living room. To hide it would miss at least half the point.

In fact, Laferriere might use her artistic expertise to give it more of the spotlight. “I’ve gone so far as to think about sculpting a specific table for it so it could be more centrally located and so that everything you need when you smoke it would be right there,” she says.

That’s a lot of trouble to go to for one little functional object, especially considering that Laferriere and Casanova aren’t smokers. “We bought this completely on a whim,” Casanova says, gesturing with dramatic flair toward the fancy pipe. A friend was visiting from out of town, and the couple felt like doing something ceremonious in honor of his arrival. They didn’t know what that might be until they happened into Jerusalem Bakery. They were browsing the grocery aisle when they saw the hookahs.

Luckily for me, I ran into them on the night of the friend’s arrival. That was also a night of gallery openings, and I was getting tired. The invitation to go to the Green Door Gallery was timed perfectly. All I’d be required to do was breathe deeply, and I was pretty sure I could handle that.

Serving their guests chamomile tea with soy milk, Casanova and Laferriere showed us how to smoke apple-flavored tobacco from the contraption. The tobacco wasn’t harsh, like a cigarette’s. It was mixed with molasses, making it smooth and sweet, and the water in the hookah purified it, so we got a superclean smoke — if such a thing was possible. It was like smoking incense or perhaps giving your throat a little bath. (Yes, it was really tobacco. I’m no pothead.)

Later, I thought about how remarkable it was that an evening of fun for seven people revolved around an object other than a television. How beautiful the object had been. How quiet and contemplative it had rendered the mood (in spite of the fact that, as I recall, someone tried to make the argument that George W. Bush wasn’t that dumb).

The hookah is “an object of socialization,” confirms Marewan Chebaro, who owns Rumi Café on 39th Street. Growing up in Lebanon, Chebaro saw his mother and her friends smoking from one when they’d get together. When she wasn’t using it, his mother kept the prized possession far from the kids. “I stole a few puffs when I was 8 or 9 years old,” he admits with a laugh.

I’d seen the hookahs prominently displayed in Rumi’s window for some time. Finally, I went in with ceramist Peter Leibert and mosaic artist Tina Block. Admittedly, I’d also been encouraged by the Communiversity listing for Chebaro’s “Smoking From the Hookah at Café Rumi” class, the only one listed under the heading “Indulgences.”

The body of the hookah was pleasantly curvaceous, but the hoses were sort of like jump-ropes. As Tina put it, the thing looked as if MacGyver had made it. “I’ll just use a tin can,” she said in her best MacGyver voice. Not that we could really get a good look at it — Rumi is primarily a restaurant, and the outdoor tables are made to hold plates of food, not top-heavy water pipes. So it sat on the ground between Tina and Pete. Hoses stretched over the table. Pete had to stop up a leak in his hose with one of my hairbands. Luckily, he understood something about the hookah’s structure — double-walled cylinders and whatnot. (Casanova, by the way, wishes that hookahs had “little buttresses” on them, because they are so easy to knock over — in case any hookah manufacturers out there are reading this and looking to improve upon the classic design.)

We decided that to get a really good look at a hookah, we should go to the newly reopened hookah bar upstairs from Jerusalem Café in Westport.

At the top of the stairs was an old, coppery hookah from India that stood about 4 feet high, its incredibly long hose draped up on the ceiling’s exposed pipes against a red-brick backdrop. Just the sight of it was intoxicating. Owner Murad Reshiq, a handsome man from Hebron, showed us around. He helped us pick a tobacco flavor (we went with rose) and then pointed out all the board games, handmade and imported from Turkey. The checkers and chess boards revealed intricate designs that held Tina spellbound. Looking closely, she determined that the boards and pieces were, in fact, mosaics. “I can see a little glue right there,” she said. “They’re all individual pieces.”

Old, furry hookah hoses hung on the walls as decoration, alongside antique Turkish musical instruments, such as the ute. On a shelf in one corner were a few hookahs that were really expensive and really easy to break. To actually smoke out of one of them would be like eating from delicate, $100 plates in a restaurant. Instead, the pretty hookahs were for admiring, like parts of a gallery display. Antique hookah accessories sat locked away in a glass case, along with ancient coffee grinders that apparently forced the coffee addict of yore to crush beans pretty much by hand.

Reshiq took great pride in all of this. He explained that when the ambience doesn’t agree with him or certain things call out for more visual attention, he adjusts the light. “It’s a different kind of coffeehouse,” he said.

After a while, Pete, Tina and I realized that between Rumi and our trip here, we’d been smoking for hours. After a couple of short yet intense chess matches, we closed the place down. None of us had to worry about going home with ashtray mouth, either.

“I think you taste nice after smoking from the hookah,” nonsmoker Laferriere says to Casanova.

And you know, it really does.