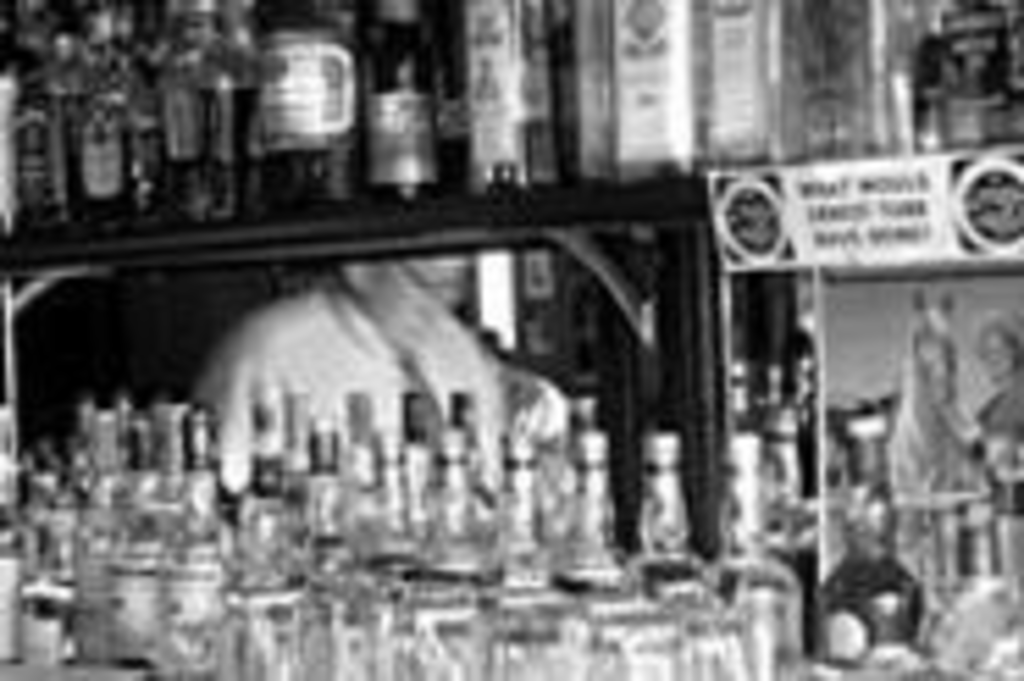 In 1882, the local city directory devoted no fewer than four pages to saloons. It listed more drinking establishments than churches, druggists and schools combined.

Kansas City’s population at the time hovered around 55,000, and the local boozing problem was getting out of hand. Civic leaders were demanding that something be done about the taverns, gambling halls and whorehouses doing such a boom business in the oldest part of the city. At the time, the area now known as the River Market was the hotbed of those vices. Sex entrepreneur Annie Chambers had her famous bordello at Fourth Street and Wyandotte, walking distance from the cluster of beer halls and faro parlors a few blocks south at Missouri Avenue and Main Street. This was Kansas City’s “entertainment” district.

By the 1920s, this same neighborhood had been sanitized by default: Most of the bars had followed the population south. The once-bawdy stretch of Missouri Avenue between Main and Grand had grown dull and commercial, its red-brick buildings home to ordinary businesses such as the Trimble-Compton Produce Company at 112 East Missouri Street, a few steps away from the shabby Ashland Hotel. The Ashland lingered until the 1940s, but the sturdy structure at 112 had better fortune: As a retail venue, including a long stint as the home of Kansas City Light & Fixtures, it weathered the ups and downs of the aging neighborhood and survived the swath of interstate highway that cut it off from the rest of downtown.

The interesting thing about the newest incarnation of 112 East Missouri Street, Harry’s Country Club, is that it looks as if it’s been there since the Pendergast era. Thanks to the artistic design work of John O’Brien and a lot of vintage woodwork and molding, the two-month-old saloon and restaurant has the appearance of a nicotine-stained honky-tonk that started serving up beer and burgers when Walt Bodine and Charlie Wheeler were still in diapers.

The charm of this illusion is that it’s been done so artfully and entertainingly that it comes across not as kitschy and imitative but rather, as music writer David Cantwell notes, like “an homage to the great old honky-tonks … adoring rather than mocking the past.”

Harry’s combines the best features of Kansas City’s historic saloons, speakeasies, nightclubs and roadhouses, right down to the black-and-white publicity stills in the men’s room of lacquer-haired go-go girls. No ordinary go-gos, by the way, but the chicks who performed with the Fendermen back in the 1960s at Genova’s Chestnut Inn, once a mecca for live entertainment on 12th Street. In its heyday, the Chestnut Inn lured acts such as Tammy Wynette and Conway Twitty to town. There’s a reason why Harry Murphy’s juke joint is called the Country Club, and that’s Murphy’s fondness for the royalty of the Grand Ole Opry: Ernest Tubb, Patsy Cline, Charlie Rich and even the young Willie Nelson, barely recognizable as a young, clean-shaven heartthrob in one framed photo on the wall.

Huge glass ashtrays wait in front of nearly every stool at the long wooden bar. (Smoking’s allowed at the tables, too.) And hanging over the mirror on a little shelf is the house selection of “yard beers” (the kind of brews that “people drink in their back yards,” bartender Harry Murphy Jr. says) — Falstaff, Schlitz, Hamms and Old Style, two bucks a can. People drink plenty of them at Harry’s — Cantwell downed a Falstaff, a Hamms and a Schlitz over dinner one night (he liked the Schlitz best) — because there’s nothing quite like a cold, cheap beer with a “city fried” chicken breast that’s drenched in a gravy heated up with roasted poblano chiles.

That Saturday night, a group of us — drinkers and teetotalers — dined underneath a portrait of country legend Wynn Stewart. Cantwell and his wife, Doris; Bob; Lorraine; and Cindy had joined me for an early but raucous dinner. Early is good here; by 6 p.m. the bar was already packed (including a sophisticated lady knitting at one end and a guy who used to work with Zsa Zsa Gabor at the other). Starving, we snapped up the menus from dark-haired server Jessie — a painter in her other life — who quickly explained that chef Howard Boyd had already eighty-sixed a few items.

Boyd and Murphy are still tinkering with the menu, but they know better than to mess with their best-selling item: that Appalachian classic, the fried-bologna sandwich. Boyd doesn’t use Oscar Mayer but instead stacks his version with that tissue-thin, packaged sandwich-meat stuff, which doesn’t taste like bologna or baloney. It’s filling enough, but it’s more salty than tasty. It’s also served undressed, which miffed one priggish patron. “Doesn’t it come with a sauce?” he whined. Murphy’s answer said it all: “No.”

I prefer the entrée choices to the sandwich selection, though during an earlier afternoon visit, I’d enjoyed the oddball choice tucked among the BLTs and burgers: a tortilla wrapped around a filling of sautéed portabella mushrooms, eggplant, red peppers and corn relish. It was messy to eat but tasted fantastic, even without a sauce.

Harry’s lunch business was brisk, but the place was really swinging after dusk. The lights were dimmed, the music was loud and the fried onion rings came out of the kitchen like sizzling bangle bracelets, accessorized with a surprisingly mild ancho-chile ketchup. Fluffy corn fritters were filled with bits of tender blue crab but took most of their flavor from the accompanying cactus aioli. Tiny slices of beer bread were lively with chopped peppers but suffered from an odd, rubbery consistency — though the dipping sauce that came with the doughy rectangles was a fine blend of Asiago cheese and sun-dried tomatoes. Boyd calls his grilled shrimp sheathed in smoky bacon “Sea Hogs” and serves them with a creamy horseradish sauce, though they’re just as tasty without it.

Lorraine said that Boyd’s menu “goes all over the world,” and that wasn’t exactly a compliment. One Mexican option, a “Big Burrito” crammed with chicken, rice, salsa and a fluffy black-bean mousse, is solid enough. But I was unimpressed by the Midwestern version of a pasta carbonara, made with penne and doused in a heavy (and not very garlicky) cream sauce. The primary ingredient seemed to be peas, which isn’t just an American innovation but also a bad one.

Even worse, I’m sorry to say, was the City Fried Filet that Lorraine ordered. The hunk of beef had been pounded — with a 10-pound hammer, maybe — into a steaklette as thin as a record, then ladled over with mushrooms and the poblano-flavored pan gravy. I didn’t think it was very flavorful, and neither did Lorraine, who neglected it in favor of a little cheese-coated square of grits. Bob enjoyed his bowl of meaty, spicy chili, and Cindy was happy with her standard-issue steakburger, though it arrived more well-done than she’d ordered it. “And the fries were the closest things to McDonald’s fries I’ve had in a sit-down restaurant,” she said.

Classic honky-tonks weren’t known for serving desserts, but Harry’s had great ones. The house-made peach cobbler, topped with a scoop of Häagen-Dazs ice cream, was really more of a fruit potpie than a traditional cobbler, though it probably needed to stay in the oven a few minutes longer. The fudgy wedge of chocolate torte, imported from a local baker, was as smooth and seductive, I bet, as one of Annie Chambers’ good-time girls.