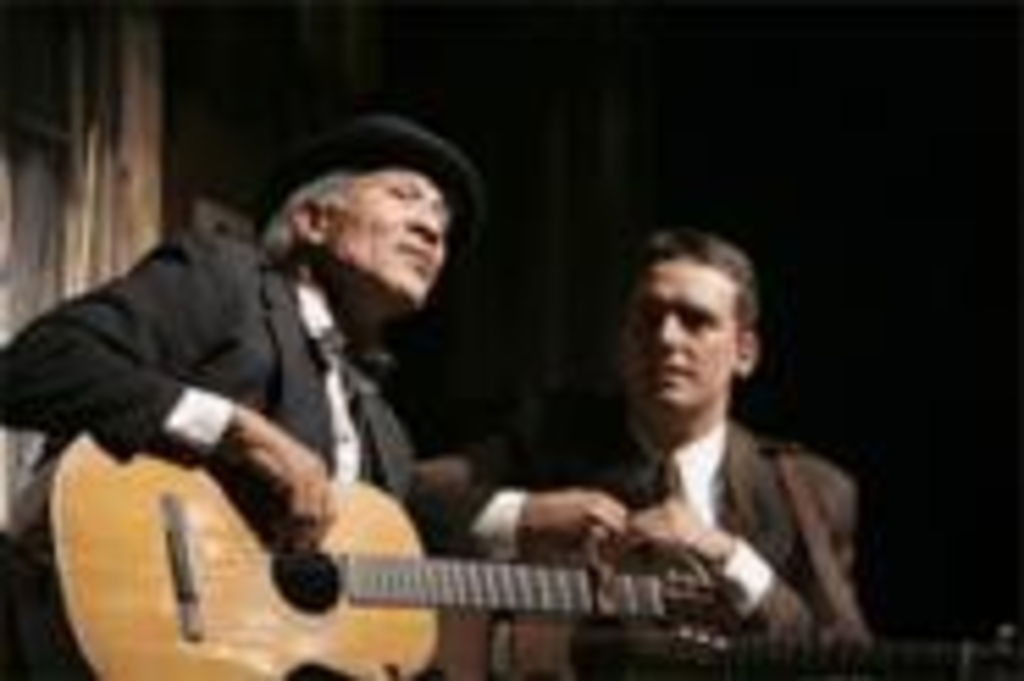 First there’s the blues, that rich yet simple howl hammering hurt into art.

In this telling, the howl comes from Tee-Tot (Mississippi Charles Bevel), a black bluesman who wails “This is the Way I Do” out in front of an Alabama gas station. His voice all honeyed grit, Tee-Tot can’t help but attract admirers. Those include a white boy wanting lessons — a white boy who we know will take those blues, cross them with hillbilly folk, and then moan and yodel his way through the most heartsick catalog in all of popular music, only to let us all down by dying young for no good reason.

It’s encouraging that Hank Williams: Lost Highway digs back to the music’s source. Instead of just running through the hits — which is the norm with this kind of musical biography — writers Randal Myler and Mark Harelik attempt to dramatize ideas. At its best, they suggest, American music flows from common headwaters, and pop once was raw and urgent, actually enriching the lives of its listeners. Most blessedly, they know enough to not reduce their hero’s psychology to some single trauma, à la Ray or Walk the Line. We all know that Hank’s going to drink and drug his way to death, and we’ve all known talented people who do the same today.

This Hank, played by an intense Van Zeiler, sings lower than Williams and has a newscaster handsomeness that’s far from the legend’s shit-eating grin. But he has the brooding hell-raiser down. Zeiler is especially strong in the emotional second half, where Williams’ drinking — made too little of earlier — takes over. Setting the woods on fire with a diner waitress (Patricia Dalen), Zeiler’s Williams is charming and scary, able to have anyone he wants, yet still deeply lonely. They roll in the grass and giggle like school kids. As Don Darnutzer’s skillful lighting gives us a night rolling into dawn, their tumble for a breath feels like it might actually matter, that Hank might actually get it together.

Then he passes out, leaving her — like us — desperate for more than this man can give.

Zeiler sings well, especially nailing the falsetto hiccups that make songs like “Long Gone Lonesome Blues” just as exciting today as they must have been 50 years back. But the rowdy boys comprising his band play a rambunctious hillbilly boogie that comes off as a little stiff. As actors, Hank’s Drifting Cowboys tend toward the broad: They play their ‘Bama boys as idiot galoots, which saps some early scenes of their power. Making up for this is Margaret Bowman as Hank’s mama, a maternal powerhouse with a dignified bearing and dead-on accent who — for a time — keeps Hank (and the show) on the straight and narrow.

While some good ideas freshen the standard biographical narrative, others are distracting. The diner and the gas station straddle the stage, leaving Tee-Tot and Dalen’s waitress on for the whole show — an awkward Greek chorus following along on their radios. Tee-Tot frowns when Hank’s failing but beams whenever he (briefly) sees the light. He gets to belt some blues lines that Williams sometimes responds to, a corny move that kept reminding me of the paintbrush that the cartoon Fat Albert used to toss to the real-life Bill Cosby. And poor Dalen is simply stranded out there, sweeping the floor, swabbing the counter, and leaving audience members to try to figure out what book she’s reading.

Ultimately, Lost Highway is polite art about wild art. When it turns Hank loose, it can thrill; when it pens him in as a troubled genius with a bluesman on one shoulder and a depressed waitress on the other, it’s silly.

“The music wasn’t written. It was born,” producer Fred Rose observes early on. This show, however, was written.
The unwritten is the province of improv. As it’s practiced in Kansas City, that sometimes-exciting comic style seems to fluctuate uncomfortably between art form and party trick. With a string of big-stage shows continuing this weekend, Full Frontal Comedy is leaning artward.

Late Breaking Comedy finds the troupe scaling back the charades-like guessing games that are the bread and butter of most local improvisers. Instead, Full Frontal offers prewritten sketches and improvised scenes with a newshound’s focus. They hit at Bush and Cheney, Fred Phelps and port security, and — fantastically — South Dakota’s abortion ban, which is gutted by director/founder Tina Morrison in “Rachel Ray’s 30 Minute Abortions,” a cooking-show sketch fueled entirely by her smiling patter.

An early scene featuring the great Shelly Stewart scores the kind of laughs that are only possible in this kind of no-props, no-costume show. As a bad mother driving with a baby (invisibly) clutched to her chest, Stewart drinks, smokes and swats at the older kids unbuckled in the back seat. Suddenly, several minutes into this, she says to her son, “Hold my drink. Mommy’s got to switch breasts.”

Turns out she’d been nursing the whole time.

Some of the other sketches are hit-and-miss, but the show’s never less than fun. I hope Full Frontal’s ambitions — six more-daring-than-usual shows in two weeks, all at Union Station — aren’t fleeting. That this Friday’s show is their 200th performance is evidence that they probably aren’t.