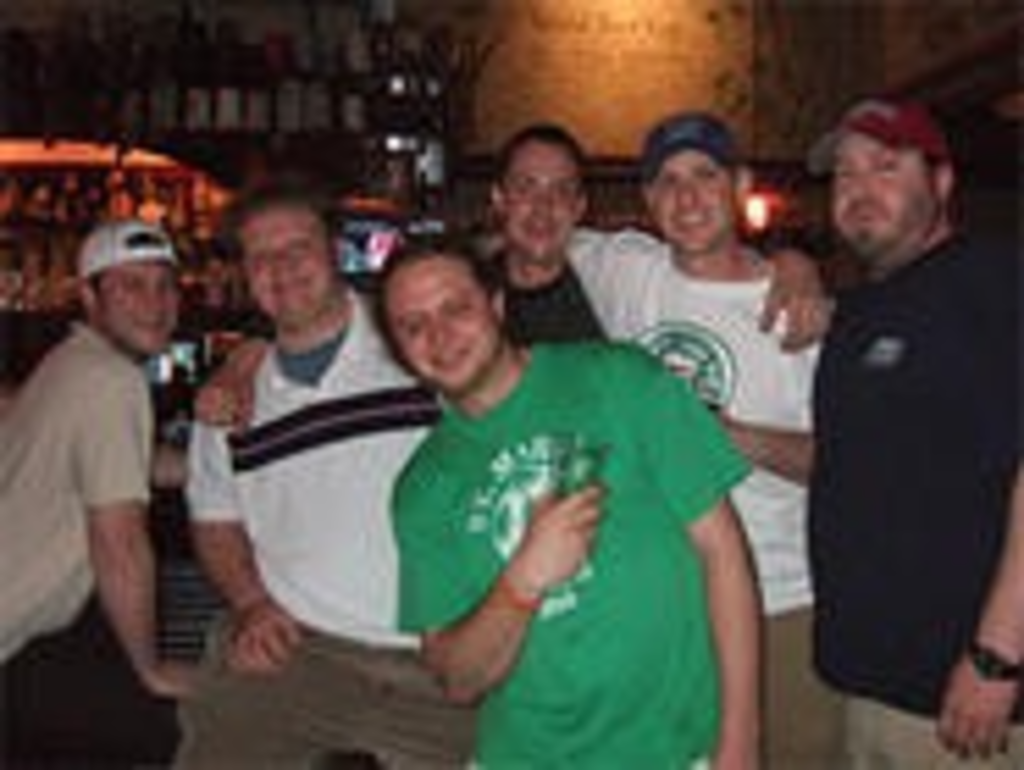 On the first Saturday night at the newly reopened 75th Street Brewery>, we were sitting at the curved end of the bar when an older guy in a logoed button-down white shirt leaned over from a couple of stools away. “Would you like a ticket to the Home Show?” he earnestly asked, offering us a piece of paper.

Uh, let us think abou- … no. Of all the things that have been passed to us in a nightlife context (flasks, karaoke microphones, dutchies — on the left-hand side, no less), a Home Show ticket was the last thing we expected. After we declined, the guy offered it to a ponytailed man sitting across the bar from us. Though Señor Ponytail seemed somewhat lit, he was still coherent enough to refuse it with a dismissive wave of his hand.

We’re glad to see that such randomness lives on at the brewery, after the Great Fire of Aught-Seven devastated Waldo in February. As the sole physical survivor along that row of businesses, the brewpub closed down and cleaned up. For its reopening, staffers sported white T-shirts with the brewery logo on the front and, on the back, slogans such as “Enjoying the beer? Thank a KC firefighter” and “Firewall good.” Other quippy T-shirts in this vein are available for $10 and benefit the Kansas City Fire Department.

The bar’s interior is back to normal, but we still felt a phantom pain because nearby Kennedy’s is now a hole in the ground surrounded by a chain-link fence. We were content to hoist a $3.75 pint of Cow Town Wheat inside with Research Assistants Josh and Laura.

The beer selection was still limited, but that didn’t stop a good-sized crowd from gathering and imbibing. The first weekend of 75th Street Part Deux drew an assortment of casually dressed neighborhood regulars, devastated KU fans in blue and red, glossy Brookside types and, according to RA Josh, a hippieish group who seemed to be immersed in a role-playing game in back. That’s 12-sided-die role-playing, not naughty-schoolgirl role-playing.

After a couple of drinks, we began chatting with our stool neighbors. We started with gray-haired Ponytail Guy, a teacher whose real name is Robert. He lives nearby and was quaffing from his own personal oversized mug. We asked how he qualified for the mug club.

“I don’t do Valium. I don’t do Prozac. I just kind of drink,” he replied. He added, “I’m a 23-year veteran of the failing inner-city school education system.”

We got depressed thinking about the woes of the Kansas City, Missouri, School District, so we moved on to a cheerier topic: the Chiefs — ha! That came about when we started talking to 47-year-old Steve, the Home Show ticketholder. He was drinking with 50-year-old Jamie, a Jeff Foxworthy doppelgänger. Jamie pulled up a sleeve of his royal-blue T-shirt to show us a Chiefs tomahawk tattoo on his freckly upper arm. Red and yellow feathers sprouted from the weapon, the arrowhead logo covered the blade and “world champions” ran down the handle.

He told us he got the tattoo in 2003, when the team had a 9-0 start before its appearance on the cover of Sports Illustrated jinxed the season. “They’re always champs, as far as I’m concerned,” Jamie drawled, before telling us more about his tattoo. He and a friend dreamed up the design; Jamie tried to show us how “69” (the Super Bowl-victory year, not the sex act) was embedded in a feather, but because the tattoo was so far back on his arm, he couldn’t see it. Steve tried to help out, but we still couldn’t decipher the date.

The guys left, and we got back to our beers. Soon, two women arrived and sat at a table by the front wall of windows. Both were clad in cocktail dresses. The two lovely brunettes, 25-year-old Dana and 26-year-old Anne, had just been to a work fund-raiser at an Overland Park hotel. They thought other co-workers would join them for some post-dinner drinking. Apparently, not so much, Anne said.

We asked about their memories of Kennedy’s. Dana fondly recalled her birthday last year — though recalled might be too strong a word. Fifteen friends took her out for a night that started at 75th Street and ended at Kennedy’s. Naturally, everyone bought her shots, so she eventually blacked out — but not before making out with her friend A.J. on a Golden Tee game. We retroactively gave her style points for using Golden Tee as a prop.

“I heard about that secondhand,” Dana said, a victim of the pesky blackout factor.

“Hey, it’s your birthday. That’s what you do,” Anne said.

As is usually the case with the drunken makeout session, nothing much resulted from it. “He had a girlfriend, but they had an open relationship. They’re German,” Dana said. “We made out a couple of times, then he moved back to Germany [with the GF]. We still keep in touch, though — thank God for MySpace.”

Anne had a different take on Kennedy’s. She had been there on a bad date. During the course of that doomed night, she felt something walking on her foot. She looked down and spotted a 3-inch-long cockroach scurrying about. “That’s why I only ever drank bottled beer there. But that was part of its charm,” she said.

Speaking of roaches, we heard a fun factoid about the area: Apparently, Widespread Panic played its first KC show in 1992 at the Waldo Astoria — at least according to a guy at the bar who had tickets to both of the band’s recent shows at the Uptown Theater. He and his friends, who work at B.B.’s Lawnside, are regulars on the block and contemplated stealing some bricks from Kennedy’s as souvenirs.

Last call was soon announced, and we left around 1:30. As we drove out, we saw two of the B.B.’s guys walking away from Kennedy’s toward the brewery lot. We’re not sure if they got any bricks — the fence is kind of prohibitive — but one of the guys raised his jug of beer to us.