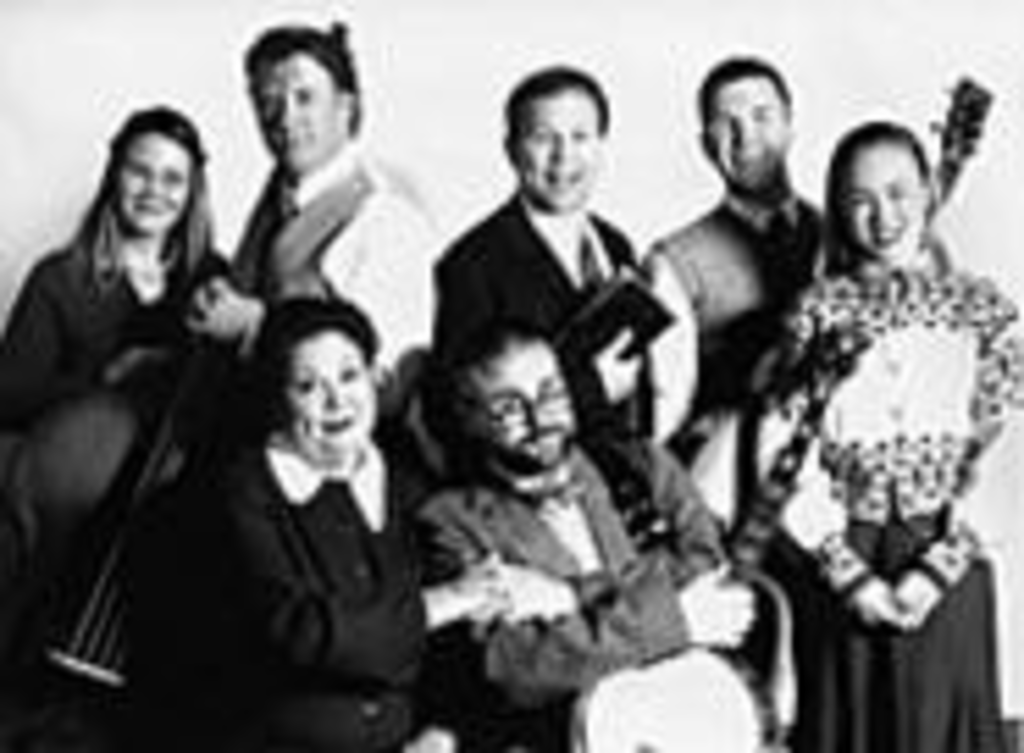 There’s nothing blatantly off-putting about the 27 songs that season Sanders Family Christmas. After all, it’s that time of year, and the onslaught is upon us. It may be the perfect show for locals who ensured that Kansas and Missouri would remain red states. Democrats still licking their wounds, though, may feel a little like a Christmas goose being force-fed something unpalatable.

American Heartland Theatre’s holiday show is less a nuanced musical than it is a holy-roller revival, with more than a dozen Bible verses included in the first fifteen minutes. It’s Christmas Eve 1941 at the Mount Pleasant Baptist Church, and spirits are at once celebratory and pensive. Those gathered to mark the literal meaning of Christmas are aglow with religiosity and a sincere adoration for President Roosevelt, yet the specter of evil is scratching at the front door. Soon, this region of North Carolina will be erecting a monument in the town square for its fallen sons.

Connie Ray and Alan Bailey first created the musical Sanders family in their pleasantly twangy Smoke on the Mountain. The family is nothing if not musical. The matriarch, Vera Sanders (Debra Bluford), for example, can sing, play the piano and pluck a stand-up bass. Also with the band are her husband, Burl (Samuel Cohen), twins Denise (Stephanie Schweitzer) and Dennis (John Gardiner), and Burl’s brother, Stanley (Stephen G. Anthony), all of whom receive their cues from the Rev. Oglethorpe (Ken Remmert). Oh, and there’s the tin-eared black sheep, June, played with scene-stealing relish by Sarah Crawford.

With all the sentiments to heaven going on in the show, I found myself only praising Crawford in that direction. We’re told that June can’t sing a lick, but the Sanderses have found a place for her anyway. When she’s not playing a washboard with a wooden spoon or shaking a pickle jar filled with beans, she signs the songs — but it’s nothing that would ever be taught in an American Sign Language class. For the pronoun “I,” for instance, she merely points to her eye. And in one reference to Christ’s birth, she squats like a parrot about to drop an egg. There’s plenty of potential for Crawford to mug, but she skirts it every time.

Director Paul Hough wisely entrusts the set design to Del Unruh, who has crafted a modest but detailed sanctuary of what looks like bleached pine. Jana Jesse’s costume design is more interesting and maybe a little subversive. The characters dress in enviously retro winter clothes that may be a tad too stylish for a family of limited means, yet Denise’s outfit — a tart green flannel dress, an oatmeal-colored jacket, and cool cowboy boots — wouldn’t be shocking on a Prada runway.

Postscript: The Coterie is understandably ecstatic about its appearance in the November 15 issue of Time magazine as one of the five best children’s theaters in the country. Richard Zoglin includes the Kansas City company among similar institutions in Seattle, Nashville, Dallas and Minneapolis.

Zoglin cites among the Coterie’s accomplishments the 2000 world premiere of The Wrestling Season, Laurie Brooks’ smart play about the metastasizing effects of a gay rumor; the season exclusively devoted to banned books, such as Lord of the Flies; and last month’s The Strange Case of Dr. Jekyll and Mr. Hyde.

“The best part of all this is that Time decided to write about the whole field of theater for young audiences,” says Coterie artistic director Jeff Church. “I feel great that the Coterie is recognized alongside theaters that have budgets of $6 [million] to $9 million. We got to the forefront without a lot of money,” he adds. “This designation was a pleasant surprise, because — let’s face it — you don’t do work in this field for credit or accolades. There are usually none.”