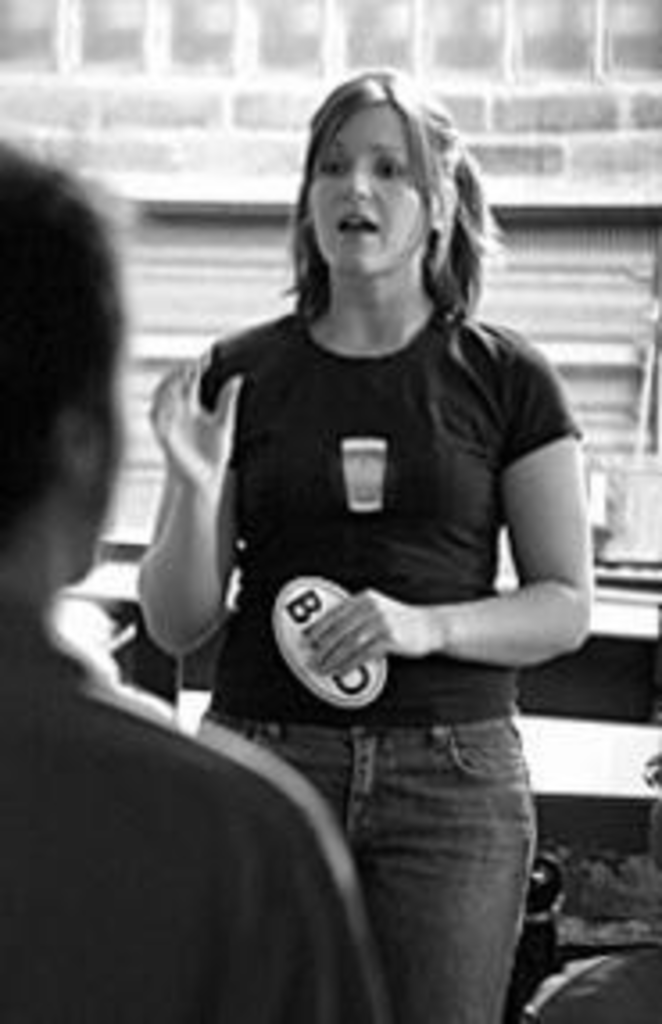 The work is rewarding, the atmosphere is great, and I just love my coworkers. Ask most people about their jobs, and this is the answer you’re likely to get, along with some eye-rolling. But Julie Smith isn’t like most people.

Every day, this Boulevard Beer hospitality coordinator wakes up feeling excited to go to work. Aside from recovering alcoholics, who wouldn’t be excited to make a living in a beer factory?

Playing tour guide and watching the enthusiasm wash over grown men and women is Smith’s favorite duty. “It’s always great to see how people are just in awe,” she says. “Some people get so excited when they’re at the brewery where their favorite thing in the world is made. This one guy always comes in and just hates leaving because it’s like Disneyland for him.” Disneyland, if Mickey served a variety of free stouts, ales and pilsners at the Space Mountain exit.

In order to keep such near-religious brewery experiences on tap, the former reporter and broadcast anchor went through six weeks of training prior to leading her first tour. Before starting, she says she had only a general understanding of how beer was made.

“I went to school in Fort Collins, Colorado, where there are tons of microbrews, so I learned a lot about what was good beer and what wasn’t, but I never really knew too much about the process of beer-making,” Smith says. “Right when I started, I spent a few days learning about and doing every job at the brewery so I could really know everything. I was with the brewers for two days — did the bottling line, spent time in the lab. I basically did the whole brewing process from start to finish.”

Now Smith knows that beer has to have an exact gravity, sugar and carbon-dioxide level if every bottle’s going to taste the same. “It’s like being in chemistry class again,” she says. “We have a chemistry lab and a biology lab where there are all sorts of scientific procedures that are done to ensure the correct levels.”

Rosy-cheeked holiday drunks get to party thanks to the work of science nerds working with bottlers, filterers, engineers, accountants, a creative director and a Belgian head brewer. “The brewery has lots of industries tied into one,” Smith says. “It’s like a big family.” A big family at a keg-party reunion. Smith says that all the staff members take turns making lunch on Thursdays. Even head honcho John McDonald cooks for the extended family sometimes. “He’s done everything from stew to grilled chicken,” Smith says.

But obviously, what everyone really wants to know is how much free beer she gets. Smith reveals that she can drink brewery-fresh beer almost every day and occasionally brings home bottles along with the bacon.

“My fiancé definitely tries to mooch the most beer off of me,” Smith says. Her fiancé, the man who first introduced her to Pale Ale, waited to propose until after she took the job at Boulevard.

But what if she quits? “I don’t see that happening,” Smith says with a laugh.