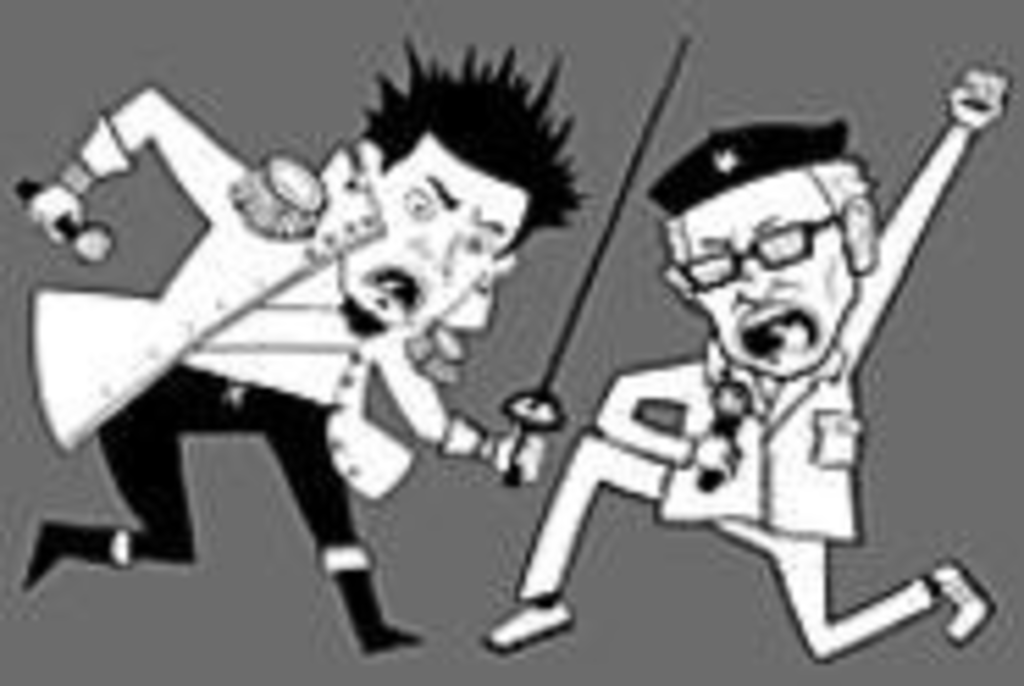 In an unprecedented coup, the Pitch has obtained classified documents detailing the government’s investigation into Linkin Park‘s third annual Projekt Revolution tour. In light of the Patriot Act, high-ranking officials concerned with any gatherings that might reek of cultural rebellion have ordered government scientists to assemble — through any means necessary — a group of the most notable revolutionary scholars in the history of history.

These memos describe top-secret plans to kidnap and smuggle Cuban dictator Fidel Castro into the country on Air Force One and to resurrect American founding father Thomas Jefferson and France’s former monarch Louis XVI through a complex combination of quantum mechanics and DNA recombination.

Using the expertise and experience of those who know revolution best, the government wishes to discern the rationale behind Linkin Park’s dogged insistence on subverting the musical status quo.

A hush-hush meeting among these three men, a translator and Mike Shinoda of Linkin Park took place earlier this summer, during which the vocalist-sampler-MC-guitarist described his band’s sonic pursuits — the rolling-and-scratching megaplatinum debut, Hybrid Theory; the Grammy-winning, Depeche Mode-having-a-psychotic-break, “Crawling”; and the group’s successful 2003 follow-up album, Meteora. The hard-hitting history of Projekt Revolution, which in the past included appearances from Xzibit, Cypress Hill and Adema, also came under heavy scrutiny.

Published below is a partial transcript of the conference, which was found among the documents.

Castro (puffing on a cigar and pulling bits of food from his beard): “Señor Shinoda, I find the name of and concept behind your tour muy interesante. Talk about it, por favor.”

Shinoda: “Projekt Revolution is really about showcasing revolutionary acts in music and people that have done things that have changed the face of music or are, in our minds, on their way to do so. We put the bill together with those things in mind. It doesn’t really matter what genre people are in. You see that this year, from Ghostface and M.O.P. to Less Than Jake and Korn. You’ve obviously got a really interesting cross-section of musical talent.”

Louis, muttering “Sacrebleu!” and mumbling something derogatory about ska before hawking a solid loogie to the side, rudely interrupts Castro’s line of questioning with a query of his own: “Oui, oui. But, eez there — how you say — liberty, fraternity or brotherhood in theez fest?”

Shinoda: “We’ve got two stages and a lot of fun stuff in the village area we’ve never even had — like a fairground area. And it’s a great family atmosphere going on backstage and in the crowd, so we’re really happy about it.”

Louis scowls at the hippie-dippie liberal connotations as he sips a glass of wine and nibbles on some aged cheese. Jefferson, on the other hand, looks pleased. Adjusting his powdered wig, he thoughtfully wonders about the internal relations within the band — whether their harmonious outside relationships translate into a balance of power within Linkin Park, as in any good democratic band.

Shinoda: “Generally when we get together and write, we just play what comes naturally and push ourselves to try and create new sounds and new-sounding parts. It’s generally like — you think about the things you want to hear out there in the world on the radio or wherever when you’re listening to music trying to find new music. If I can’t find something, I just try and make it myself. If there’s a specific type of sound or song that I want to hear and nobody’s making it, then I’ll just go try and make it.”

Looking concerned at this admission of nonconformity, Castro cues up Meteora. He becomes so incensed at its unique sonics that he comments about its merits in rapid-fire Spanish. Roughly translated: “Large amounts of brutal guitar riffs, electronica flourishes and screaming vocals.”

Shinoda, sensing discomfort emanating from his questioners, is quick to defend Linkin Park’s ambition: “Every time we go into the studio, we want to do something different. We knew what we liked about Hybrid Theory. And inevitably, when the six of us get together to write songs, we have a style that comes across in the music. So we figured we could really push our boundaries and it would still sound like Linkin Park, but we definitely wanted to try some new things.”

Jefferson, listening to the Japanese flutes on “Nobody’s Listening” and the 20-piece string section on “Breaking The Habit,” nods happily in assent. He then reaches into a stack of papers and pulls out a document that shows detailed photos of Meteora, a series of beautiful monasteries perched on cliffs in Greece from which the album gets its name. Jefferson: “Good man, these plans were found among your personal effects — they rival Monticello in attractiveness! Tell me about it.”

Shinoda: “We saw that [Meteora] on a travel magazine and thought it was a really great idea … this timeless structure that they say hovers in the air. We thought it was the type of album that we wanted to make, something that could stand the test of time and have this kind of epic quality to it.”

Jefferson smiles again, but pragmatically expresses reservations that the rapped lyrics, coupled with the metallic chords, might lead some to dismiss Linkin Park as just another angst-ridden bunch of harsh anti-intellectuals.

Shinoda: “Obviously, there is rap in our music and there are heavy guitars. So if that’s all you mean by rap-metal, then you can’t avoid the label. However, I don’t think that other rap-metal bands [are] writing songs like ‘Breaking the Habit.'”

Louis and Castro, by this point pacing the room in disgust at the band’s erudition and stubborn individualism, each ask Shinoda one last time to explain exactly who the members of Linkin Park think they are.

Shinoda: “Our music speaks for itself. If you really want to know who Linkin Park is, then you should come to the show and watch the concert. Because that’s really what we’re all about. That’s us playing the music for you, face to face, one-on-one. It really comes back to the music. What we do in the studio and what we do onstage, that’s really where we have a lot of fun and where we put so much energy.”