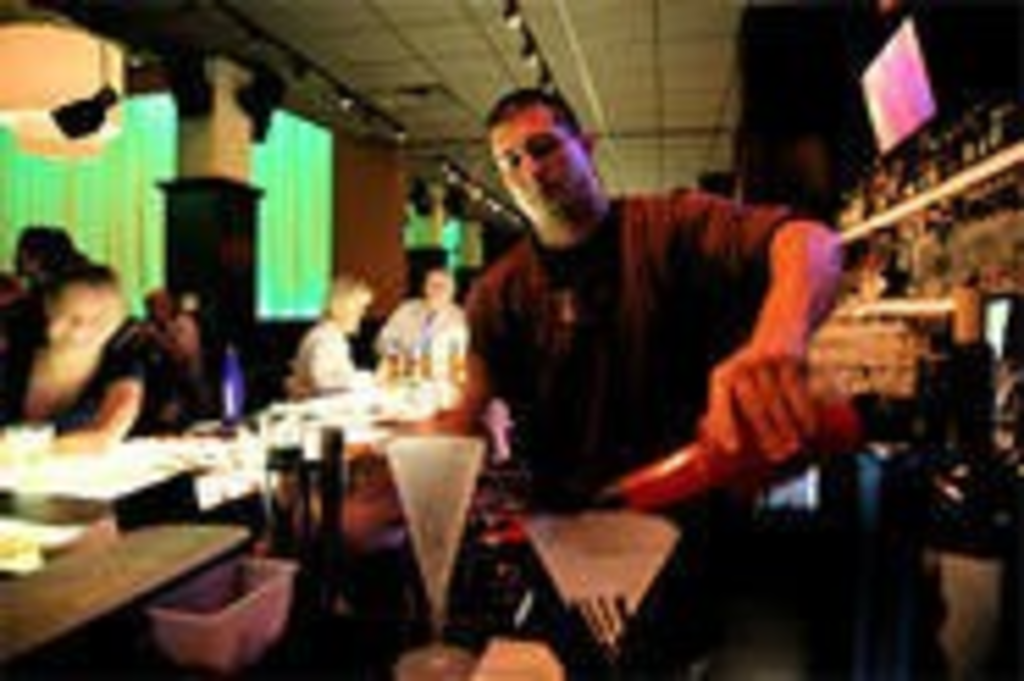 It doesn’t take a trip to the boats to know that there’s some magical importance to the number seven — it’s the most frequent “lucky” digit on nearly all those bright, noisy slot machines. But where did seven earn its reputation? Come on, you don’t have to think very hard: There are seven days of the week, seven ancient planets, seven chakras on the human body. And, supposedly, seven virtues and seven deadly sins.

On that subject, Seven owners Bill George and Victor Fontana hired noted local mixologist Susan Avery to create seven cocktails inspired by the capital sins that date back to Dante: pride, envy, wrath, sloth, greed, gluttony and lust. It’s easy to fall prey to at least one or two of those sins at the two-month-old restaurant — particularly after downing the most expensive cocktail, Greed (Grey Goose vodka, Licor 43, peach and mango purée, champagne and Chambord). It sounded awful to me, but it did embolden a friend to make a pass at one of the willowy waitresses. She wisely brushed him off, and my friend told me that he repaired his wounded pride with a spicy Wrath, made of peppered vodka and Bloody Mary mix.

I left the sinful beverages to others, but I did succumb to gluttony on all four of my visits to Seven. I have no regrets. Well, maybe one: I’m way too old to be eating cotton candy, but Seven’s servers bring out the woven colored sugar as a finale for each meal, and I ripped off a chunk and licked my sticky fingers between bites. If I’d had an ounce of pride that night, I might have had more decorum. The devil made me do it.

Seven is, hands down, the most stylish and imaginative new restaurant in town. Much of the sophisticated tone of the place is set by Hal Swanson’s glamorous décor, which evokes New York nightclubs from another era. The space boasts 24-foot-high ceilings, illuminated walls draped in billowy translucent fabric, and the most elegant bathrooms in the city.

As my friend Harris puts it, “Of all the new restaurants in town, it’s the only one that has that urban flair to assure people that, yes, they do live in a metropolitan environment.”

The razzle-dazzle of the place isn’t surprising to anyone familiar with Fontana’s résumé. He is, after all, the restaurateur who gave Kansas City its first upscale bistro-disco back in 1976. After Fanny’s packed up in 1978, Fontana went on to open a series of other restaurants: Veco’s, Charlie Charlie’s, Frankie’s on the Plaza. They were all tasteful and dramatic and light-years away from the blue-collar joint where he started his career, Frank’s Place at 18th Street and Cherry.

Frank’s Place was his dad’s bar and grill, beloved by the neighborhood’s factory workers. Fontana started working there when he was 21. “He was so handsome and all show,” recalls my friend Evelyn, who used to work at nearby Unitog and would go in at lunch just to moon over the virile Victor.

Fontana still looks pretty damn good, though he moves a little more slowly since recovering from a near-fatal illness several years ago. “I still come in every day and every night,” he says. “We have a great staff, so it’s not mandatory, but it’s where I want to be.”

A lot of his clientele feels the same way. The visually sumptuous dining room is often filled with customers who’ve been dining on Fontana’s signature dishes — beef-tenderloin Modiga, osso buco, lobster Giordano — since Gerald Ford was in the White House. And if they want to, the sexy baby boomers who shook their groove thangs on Fanny’s dance floor can do the hustle on Seven’s more modest dance floor every Thursday, Friday and Saturday night. “It’s an over-35 crowd,” one of the waiters told me. “The younger people don’t come in until way later in the evening.”

Don’t look at me. I was there to indulge myself only on food. I’ve stuffed myself silly on lots of good things here, including a crispy thin-crust pizza topped with sweet Italian sausage, warm caramelized onion, roasted peppers and caciocavallo cheese, along with entrées that harken back to Fanny’s menu.

The prices are sort of retro, too. Fontana saves costlier fare, such as the lobster Giordano, for weekend specials. The daily menu has a half-dozen pasta dishes priced at about $15 and a dozen entrées that are easy on the wallet (by upscale-restaurant standards). A couple of dishes under $20 are bargains in my book: the fork-tender short ribs sided with roasted-garlic smashed potatoes or the plump chicken breast draped in a supple white wine, lemon and caper sauce.

One night, I shared dinner with Carol Ann and her mother, Rose, who couldn’t stop talking about the look of the place — particularly the changing colored lights hidden behind the gauzy wall fabric. Soon, however, the starters arrived, and the women were more interested in the fat shrimp wrapped in crispy prosciutto and a slice of crusty bruschetta topped with chopped onion, tomato and creamy goat cheese.

When dinner arrived, Rose admired the slices of succulent veal, generously piled with a mound of wild mushrooms and asparagus. “They don’t skimp on the amount of food they serve you,” she said. Carol was equally awed by a simple chicken breast jazzed up with soft roasted red peppers, artichoke hearts and a splash of beurre blanc.

I had considered ordering a dish I’d enjoyed at an earlier lunch, called “A Different Kind of Chicken Lasagna.” It’s different, all right — it’s not lasagna at all but rather several handkerchief-sized squares of cooked pasta wrapped around roasted chicken, seasoned ricotta and fresh spinach. Instead, I opted for a hunk of grilled pink salmon crusted with crushed pistachios and served on a thick bed of creamy polenta.

When I returned a few days later for lunch with my friend Ned, he went right for the short ribs. “You don’t see them on many menus anymore,” he said, before declaring them too good to pass up. I sipped from a cup of rustic minestrone soup, then moved on to the popular pizza blanketed with sweet fig spread, salty prosciutto and punchy gorgonzola underneath bubbly mozzarella and a hint of fresh rosemary.

“This is my new favorite restaurant in town,” Ned announced after pushing away his plate.

“But you’ve only been here once,” I protested.

That didn’t matter. After all, he had a convincing argument: “You don’t have to go to a place seven times to know if you like it or not.”