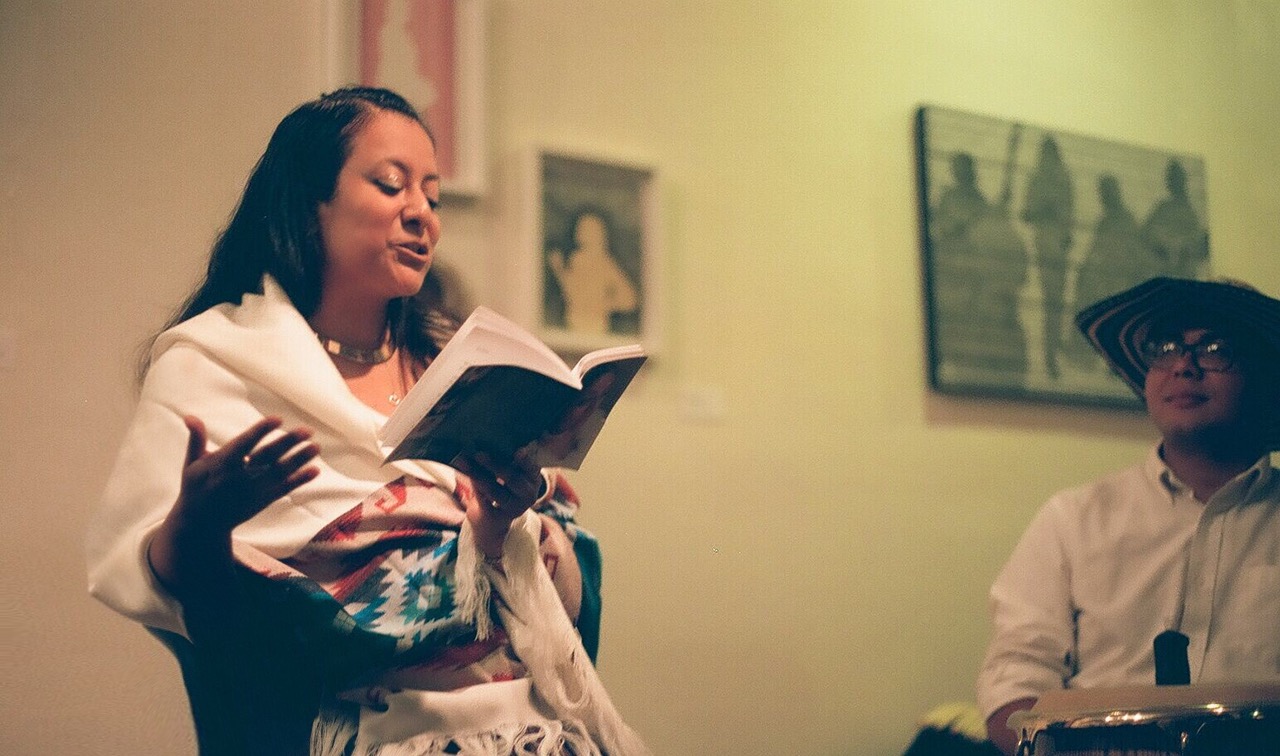 Jessica Ayala learned how to write in English before she could speak English. Her family emigrated from Colombia to south Kansas City in 1983, when she was just three years old. And Ayala still writes before she speaks—she considers it a foundational quality of her poetry.

“I think that is my poetry,” Ayala says. “My poetry is my personal, vulnerable message to the world before the Jessica who actually speaks in public.”

Ayala’s poetry—she has a book of poems coming out in April 2020 and her 2017 collection, “Huelga,” is being republished this month—is indeed personal and often reflective of her family’s heritage. She describes her father as a “stickler” about reminding his children of their roots; growing up, they often listened to Colombian folkloric music on records he brought back from trips back to South America. Big, festive family gatherings were common.

“They [the parties] would start late and end super early in the mornings,” Ayala recalls. “I remember having an entire living room full of nothing but my parents’ friends dancing and eating. Usually folkloric music would come on at two in the morning, and that’s when all the ancestors—my aunts and our oldest relatives—would dance. There was something about that tradition that just really pulled on me.”

Ayala began incorporating the percussions of those parties into her poetry performances in 2016, at venues like The Writer’s Place and RecordBar. At the Mutual Musicians Foundation one night that year, Ayala discovered the Kansas City Rumba Collective, which she describes as “a collaborative effort of artists passionate about preserving the spirit of the Afro Cuban and Afro Colombian drum.” They reminded her of the music she’d grown up with, and her collaboration with the group, now three years running, served as a kind of bridge between Ayala’s poetry and songwriting impulses. She has since performed as a singer and spoken-word artist with the collective at Loose Park and Art in the Loop. (She also now performs with Arquesta Del SolSoul, the sprawling hip-hop art project led by Les Izmore.)

Fusing hip-hop, poetry, percussion, and jazz, Ayala says, “has been this fun, eclectic mix of my heritage. Finding a way where [the music] complements the poetry, and turning words into song,” she says.

Ayala’s work as a teacher and community organizer has also been finding its way into her art. She taught ESL throughout much of the 2000s and worked with immigrant youth in the Westside and Northeast communities, creating bilingual after-school programming and creating spaces to advocate for Dreamers. And the national headlines about Immigration and Customs Enforcement (ICE) are hardly news to Ayala, who has been battling the agency for the last 15 years, organizing rallies and marches in protest of several anti-immigrant bills in the Missouri legislature. Nor are large-scale roundups of immigrants like the raid at a Mississippi food plant in August a shock to her. In Postville, Iowa, in 2008, she witnessed the ICE arrest of 400 people at a meatpacking plant.

“The poetry [in “Huelga”] was my love letter to my community—I want my community to remind itself just how beautiful we are and how resilient and how powerful we are in the midst of this,” Ayala says. “That’s what ‘Huelga’ is. The word huelga in Spanish means strike, it means boycott, it means resist.”

Ayala is currently working on an installation to accompany her second book of poetry, which will be released next spring. The installation will include 10 displays of family heirlooms, a mixed media collage, and a reading with her band. The book is intended to pick up where “Huelga” left off, zooming in on her experiences as a Colombian American.

“I think what I’m starting to hear—and I pray that it continues—is, ‘I’m not afraid anymore,’” Ayala says. “That’s the conversation that I want at the table, and that’s the one that I’m going to continue to push. We need to keep pushing the language to change. Because once language changes, our attitudes change. Once our attitudes change, our actions change.”