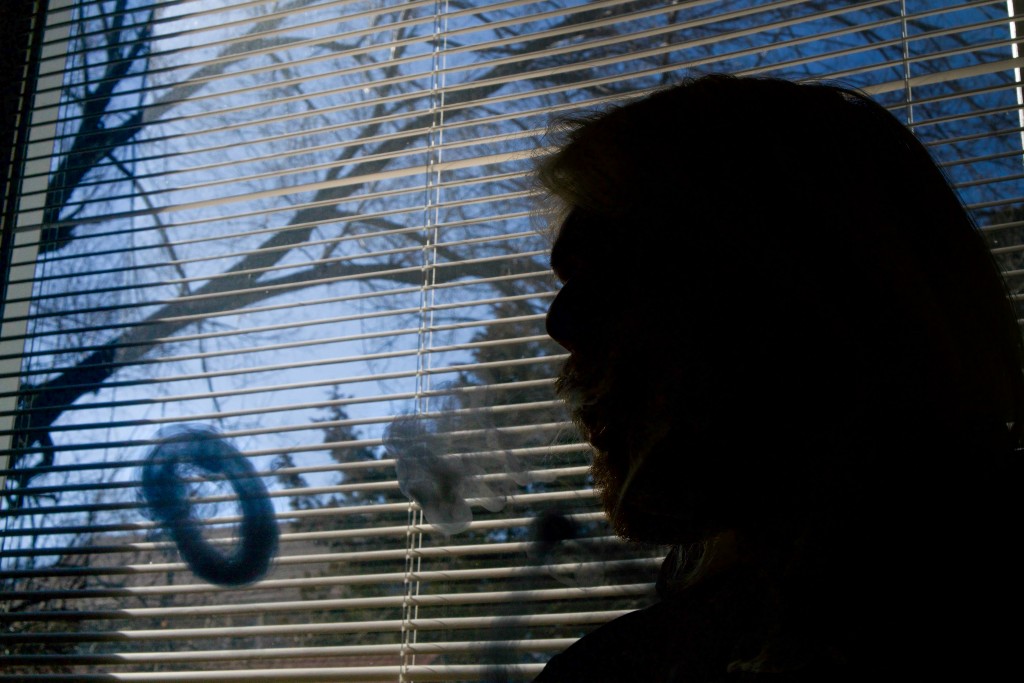 Self-medicating and turning a profit. // Photo by Liam Mays

Names in this story are changed to protect the interview subjects. Stories were vetted.

When Steven was given his prescription of 60 pills a month of Adderall for his ADHD, he quickly realized there was no way he’d consume that amount of the drug. So, when he became a freshman at the University of Kansas, he started asking his friends if they were interested in buying the extra pills.

Steven was taking one pill a week—not the two-per-day he had been prescribed. He started out on a different medication for ADHD, a less-common drug called Vyvanse. After hearing his doctor lecture about the high demand for Adderall, Steven said he started to think about the cost/benefit of the market for dealing said drug. He started selling the upper for $4 a piece in bulk, and his friends would, in turn, resell the drugs at a higher price. Steven conducted the transactions from the comfort of his bedroom in a KU scholarship hall—a living option that is part-dorm, part-home and reserved only for students who maintain a high GPA and pass an academic review. He was running a state-funded multi-level marketing dealership.

Whether it’s earning money to pay bills, supplementing a drug habit, or just capitalizing on a solid business opportunity—students across KU find drug dealing to be a fast, easy way to make untraced cash. 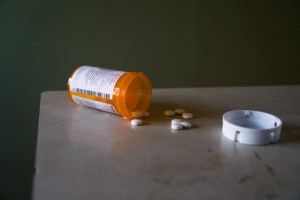 College kids are dealing to make ends meet? Stop faux-gasping. Of course this is a forever-collegiate move. But the structures around this are worth examining.

Steven said he got to a point where he’d have his personal bottle of Adderall to last him the semester, and every monthly prescription he got after that, he’d sell. Eventually, Steven juggled a full-load of classes, a part-time job, and his network dealing Adderall. There was never a shortage of students looking for the drug. Even though he said he was overprescribed, he still didn’t have enough to meet the demand. Turning down requests was a regular occurrence. Selling Adderall wasn’t just Steven’s side hustle. It was a second part-time job with one goal: make extra cash to help him graduate with less student debt.

“It doesn’t really take time so it’s just kind of an easy way to bring in money,” said Steven who is now in his fourth year as a student at KU.

For students who struggle to make ends meet, dealing drugs might seem like a good alternative to a standard part-time job.

“You’re probably working 15 hours to 18 hours a day on school work; it’s really hard to get a part-time job,” said Dawson who primarily deals marijuana and is in his fourth year at KU. “Even when you do, you work 20 hours a week and two weeks later you get a paycheck for 350 bucks.”

These kids find college to be a perfect environment for dealing because it’s a time when more people are open to experimenting than ever. A recent survey by the Substance Abuse and Mental Health Services Administration found that more than 22 percent of full-time college students reported using an illicit drug within the past month. 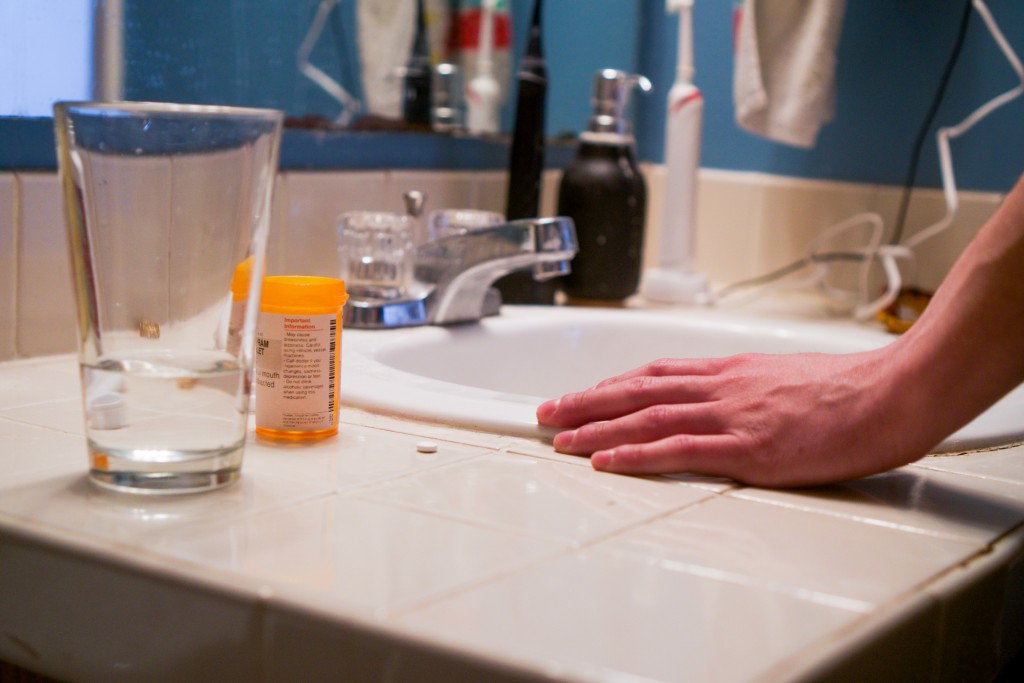 According to Steven, there was never a shortage of students looking to buy Adderall. // Photo by Liam Mays

A reported 50 percent of incoming freshmen at the University of Kansas take out loans averaging $6,874 per year to help pay for their education, according to College Factual. In addition, 36 percent of college students reported they were housing and food insecure—leaving many students dire for extra cash, according to CNBC.

KU may have a reputation locally as a school with an affluent student base, but a 2016 survey of undergraduates showed that about 54 percent reported being “food insecure,” which is why the university started a food pantry for students called the Campus Cupboard. That same year, a group of KU students formed to lobby against rising tuition costs. As of 2015, KU’s tuition has increased nearly 200 percent since 1999.

The dealers interviewed for this story reported that a high percentage of users were also looking to become resellers themselves. Look: some people pay more attention in business school than others. This joke works on multiple levels.

“One of the quickest ways to push people to commit crimes to stay alive is to make their housing situation unsure, precarious; make it to where they don’t know whether or not they’re going to have a place to sleep every night. That’s going to push them to those areas,” said Wesley Cudney, a sophomore political science major and the president of Against Rising Tuition at KU. “And we have the power of students to directly affect these, to directly change these because these decisions are made by students.”

Several students said part of the appeal of drug dealing is that it requires a very small time commitment compared to holding down a part-time, usually low-paying job. They said the appeal grew when they realized they wouldn’t even have to leave their apartments to deal drugs.

“Once they see how easy it is, I feel like it would definitely drive somebody to want to make money that way,” said Dawson, a KU student dealer.

Dawson usually buys from a distributor in Lawrence who grows weed in their house, not too far from the KU campus. For him, the whole process is quick, simple, and easy because he can buy the product, sell three-fourths of it to make some extra money, and keep one-fourth for his own drug use. The primary reason he began to deal was to supplement the amount of money he spends on his own drug habits. In a good month, he’ll go even. In a bad month, he’ll lose $600-$1,200 on his own usage. This is usually a result of combining the losses of ordering excessive cocaine and weed. 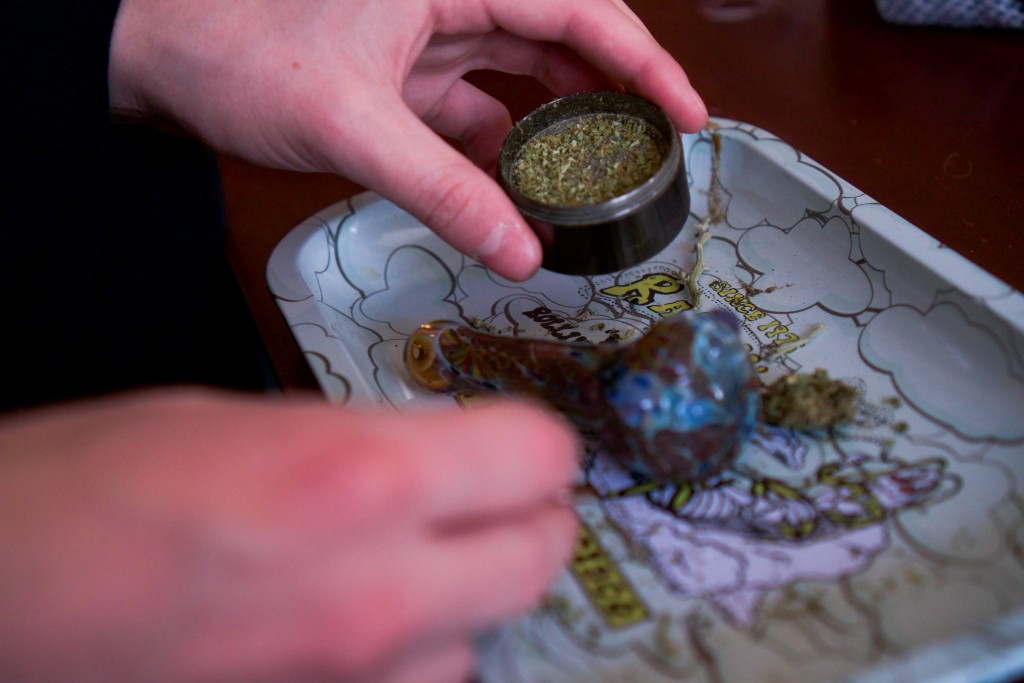 But students don’t just turn to illegal distributors for their product. Some, like Steven, turn to their physicians and pharmacists. Students said it’s relatively easy to get prescribed to a drug that many people seek, such as Adderall and Xanax. The prescriptions given by doctors for benzodiazepines, which include Xanax, doubled from 2003 to 2015 according to NPR.

“A student can easily go get a prescription for Xanax when they don’t need it on their parents’ insurance,” Dawson said. “You could sell a whole script of that and make tons of money.”

Some students notice freshmen who are looking for drugs and alcohol and see a business opportunity. Jack, who is in his third year at KU, said his friend and former roommate began selling during his first year at KU. His client base became undeniably sizable.

“I’d seen people coming in and out of their apartment and the Venmo transactions and stuff like that and I kind of caught on and so I wanted to try,” Jack said. “I wanted to make some money.”

Jack thought of dealing as a business opportunity, but he also liked the social aspect that it entailed.

“My roommate left and he had been selling for a couple months and built some clients,” Jack said. “I knew some people that smoked, and I felt like you only needed a handful or so to make money back and not really worry about it.”

Jack said he began hanging with his fellow dealer-friends much more frequently around this time. He started trying to increase his own marijuana tolerance because he said he didn’t want to feel like a light-weight in situations where everyone else was going harder. The pressure to go big or go home lead him to the next tier contraband. 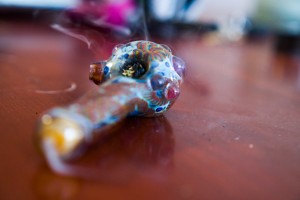 Moments after taking a hit. // Photo by Liam Mays

Jack is one of the 1-in-10 college students who have experimented with MDMA, according to the Addiction Center. Because MDMA is mainly used for recreational purposes and is still considered experimental for treatments, the drug isn’t usually made in a pharmacy. Also known as molly and ecstasy, it is usually a homemade concoction, with people making versions in their homes in Lawrence. Jack claims they’ll pack and cut the drug with a mixture of caffeine, meth and, sometimes, heroin.

“If you’re doing MDMA in general, you’re probably not addicted to MDMA so much as you are addicted to drugs,” Dawson said.

Dawson said they’ll produce the drug this way so that students will come back and feel the urge to keep taking MDMA, even though the drug itself has yet to be proven addictive, according to the National Institute on Drug Abuse. even though the actual drug itself isn’t considered addictive.

“These pills that college kids are buying are buying from shitty people who don’t care what’s in it,” Jack said.

In addition, Jack said they’ll pack the pills with other drugs as a way to save cost.

“I’m sure that caffeine and meth have been in the drugs I’ve snorted,” Jack admitted.

Both Jack and Dawson said that finding drugs in Lawrence is incredibly easy. Jack said it’s well-known that you can get meth in the parking lot of a local grocery store if you hang out for long enough. Dawson said many dealers will post up around a popular bar for underage students and will sell party pills and cocaine to any unsuspecting student.

Dawson said that fentanyl has also been a big scare lately within the drug usage inner-circle. According to the Centers for Disease Control and Prevention, synthetic opioids such as fentanyl had seen a 47 percent increase in fatal overdoses from 2016 to 2017. And, if students don’t know what they’re looking for when purchasing a drug, it could be something unexpected, like fentanyl, Dawson said. According to the CDC, illegally-made fentanyl can be found in heroin, cocaine, and counterfeit pills like the MDMA many college students experiment with.

Is there a possible set of risks? Students who deal to make extra cash, whether the reason is to minimize debt or to pay for their own drug habit, are risking their ability to attend university. Repeated non-academic misconduct violations can eventually result in a suspension or expulsion for students who were trying to keep their head above water and stay out of debt. 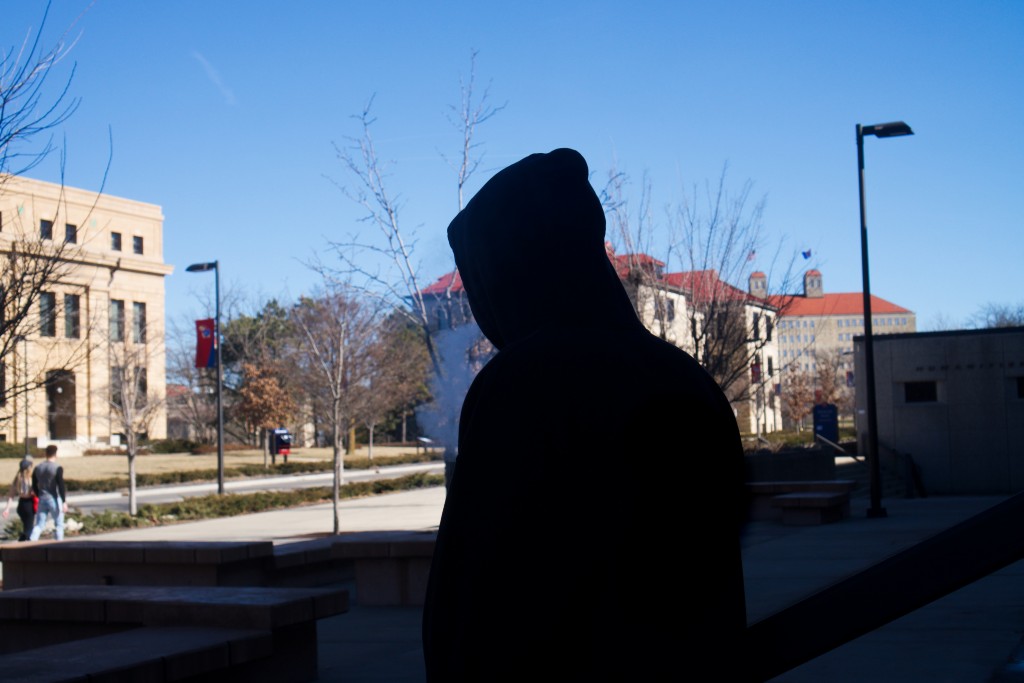 A puff of smoke on a cold day on the KU campus. // Photo by Liam Mays

There were 35 drug-related conduct violations in the fall of 2018 and 34 in the spring of 2019 at KU, according to the Office of Student Conduct and Community Standards. The number of drug-related criminal reports in Lawrence is about three times higher. In the last year, there have been a little over 100 such reports in Lawrence, nine of those for distribution, according to the Lawrence Police Department.

Katie Treadwell, director of student conduct and community standards at KU, said that KU is unique in that there are no standard sanctions for violations. Every student is reviewed individually and has the option to go through a formal or informal hearing where the student makes their case. A panel then decides if the students are responsible for the misconduct as well as potential sanctions.

However, Treadwell said that KU doesn’t consider prior history when determining responsibility. In other words, if the student makes the case that they only began dealing because they were in debt, that wouldn’t affect their determination of responsibility—but it could potentially affect their determination of which sanctions the student might receive.

Treadwell said at KU it’s rare for a student to be suspended or expelled after the first or second case. Once there’s been three or four cases, they are more likely to seek a greater punishment.

“Know when to stop if you’re doing it, so like, don’t get caught that third time to make it a felony,” Jack said.

So. That’s that standard in Lawrence. If you’re trying to cram for finals: four strikes and you’re out.