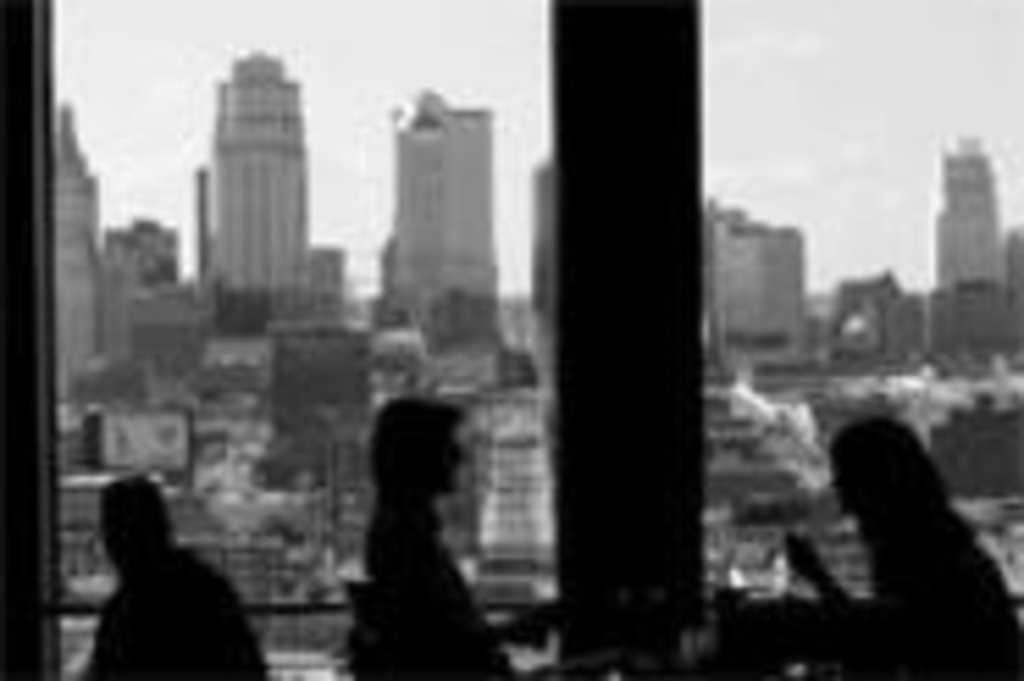 Twenty years ago, the executives running the Westin Crown Center Hotel decided to turn the fancy French-style restaurant on the hotel’s 20th floor into something that reflected the culinary spirit of Kansas City. After watching their customers leave the Westin to dine at the Hereford House or the Golden Ox, they had figured out that their guests were more interested in eating a thick, juicy Kansas City steak than le coq au vin or les casserolettes Madame Pompadour.

So they sent the hoity-toity Top of the Crown concept to the guillotine, ripping the lush draperies off the windows and turning the restaurant into a steakhouse named after legendary Missouri artist Thomas Hart Benton. There have been several incarnations of Benton’s over the years, most recently Benton’s Steak & Chop House. Last month, it got a new menu — the first created by executive sous chef Byron Meeks — and it’s not just an artful collection of regional American dishes. It’s also an interesting lesson in Westin Crown Center Hotel history.

For one thing, there’s that line on the first page, right under the Benton’s Steak & Chop House name: “Fine Cuisine since 1973.” Yes, there’s been fine dining in this location for the past 32 years, but Benton’s is of more recent vintage. The appetizer list also offers a nugget of culinary history. At first glance, it might seem odd that a Kansas City steak joint — even an upscale version — would add steamed shrimp dumplings, crab rangoon and “Oriental cheese balls” to the menu.

Those cheese balls threw me, anyway. They’re made with diced shrimp, cheddar cheese and jalapeño peppers — a combination probably unknown in any Asian province. And yet the crunchy things seemed oddly familiar. “Don’t you remember them?” said Rodman Cruse, Benton’s general manager for the past three years, when I asked. “They were on the Trader Vic’s menu.”

Trader Vic’s was the Westin’s Polynesian playhouse for 23 years, until it also got axed by the hotel in 1996. The legendary Miss Lee, who made that restaurant’s tropical treats (remember the Cosmo Tidbits platter?), is now in the Benton’s kitchen, stuffing those dumplings and rolling those cheese balls.

“Those are Trader Vic’s balls,” I informed my friend Cathy as she gingerly bit into one. It was Cathy’s birthday, and she was having her own sort of ball, dining at Benton’s with Bob, Queen Bey and me as we watched a thunderstorm quickly darken the western horizon from our window-side table.

“What if there’s a tornado?” Cathy asked, cutting a steamed dumpling in half with her fork. “Where would we go? This dining room is surrounded by windows.”

But the spectacular urban panorama — only more dramatic when the weather is stormy — is what makes Benton’s more than a steakhouse, Cruse would later argue. “Other steakhouses focus on the steak,” he said. “We’re about the experience. The view, the service and the food.”

To heighten the “experience,” the Westin imported Cruse from a Michigan restaurant chain to dazzle up Benton’s image, which had grown dowdy in recent years. His first challenge was to finally kick the bucket — that is, the vastly overrated bucket of peel-and-eat shrimp that for years had been Benton’s drawing card. It was the starter for a package dinner deal (the crustaceans were served in a porcelain pail, but the portion wasn’t as generous as it appeared) and included a basket of bread, a salad prepared tableside and the dinner entrée. Customers howled when Benton’s nixed that deal in 2001, so it was half-heartedly revived.

“I said we either brought it back completely or do away with it forever,” said Cruse, who chose the latter course. “And no one has come in asking for it since.”

Instead of luring diners with a plebian meal deal, Cruse turned the room into a showplace again, with new gas fireplaces, pretty cobalt-blue glassware, expensive china and flatware, and a cozy lounge that offers live jazz two nights a week. When I last reviewed Benton’s (“Top Chop,” March 15, 2001), it was still coasting on its 1980s reputation. The stylishly renovated Benton’s is a big improvement, not only from a visual standpoint but from a sensory one, too. The food is as classy as the décor.

The aged steaks — the kitchen uses premium choice now instead of the more costly Angus — are very good. Bob had a thick, juicy 16-ounce Kansas City strip dripping with Cognac butter that he loved, though he indulgently asked for béarnaise sauce and unfortunately got a dish of hollandaise instead. “But it is béarnaise,” insisted our server, who probably didn’t know the difference. Another disappointment was Queen Bey’s searing seafood bouillabaisse. The menu says it has “a hint of cayenne,” but that particular bowl was practically a peppery scream.

“You can’t hardly enjoy it,” said Queen, who finally found satisfaction in another seafood offering, a dinner entrée of two fat (and expensive) lump crab cakes made with chunks of succulent Maryland crab held loosely together and lightly broiled. Cathy’s bacon-wrapped beef medallions were blanketed with a silken beurre blanc rich with bits of crab. “I may have to loosen the belt on this dress,” Cathy whispered after a few bites.

I tasted everyone else’s meals, and, though they were all excellent, they were almost too decadent. I was glad I had made a simpler choice, a thick, braised veal chop and a hefty side order of lovely creamed spinach. By Benton’s standards, it was almost a diet plate.

But Benton’s is all about overindulgence, especially on Sundays, when the venue serves one of the city’s last elegant, over-the-top brunch buffets. On these weekly occasions, the lounge becomes an omelet bar, with a toque-wearing chef carving up slices of roast beef at one station. Even better, there’s a long table lavishly laden with pastries and desserts almost too pretty to eat.

This brunch is costlier than most of its rivals, but again, it’s all about the experience, which includes the sunny view, attentive service and a gleaming line of silvery chafing dishes loaded with things like beef medallions, baked fish or, considering that it’s a buffet, a remarkably good eggs Benedict. On the other side of the dining room are healthier offerings, such as salads and fruit, which I ignore as I head straight to a mound of caviar, flaky croissants and, in a nod to the restaurant’s past, a hefty pile of peel-and-eat shrimp. You can’t fill a bucket with them, but I have seen people heap their plates as if they never expected to see a crustacean again.

“There’s something about a buffet like this that makes you feel culturally obligated to sample everything,” my friend Ned observed one Sunday morning. “I mean, they set it all out for us, and it would be rude not to eat a lot.”

Be warned, though: Good manners are the rule at Benton’s.