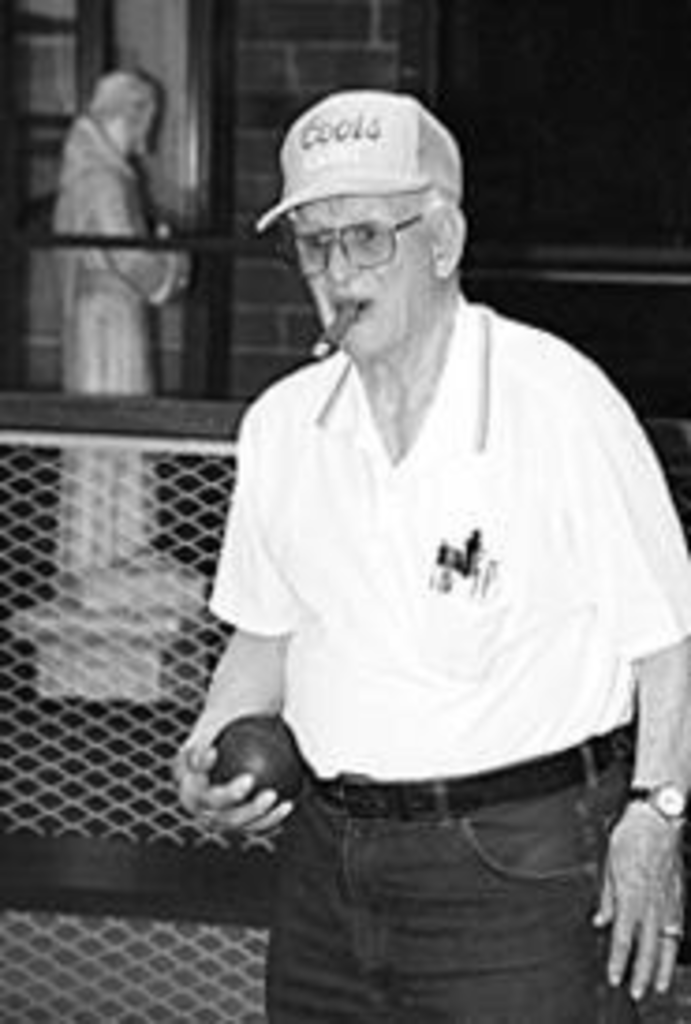 The old Italian ball-tossing sport known as bocce is becoming hipper by the year. Prada makes bocce sets. So does Restoration Hardware. Ebay is a gold mine of vintage sets that come with classy, rounded-vinyl or canvas totes. Are these replacing bowling-ball bags as the new geri-inspired fashion accessory? We think so.

Martini-swilling twenty- and thirtysomethings have long enjoyed bocce at the Velvet Dog, where sand-covered pits adorn a trendy bar patio. But this past winter, some quirky locals held an indoor bocce tournament on a cold night of downtown gallery openings. In the same venue where stylish whippersnappers had just sold off slick-looking wearable art, a good-sized crowd of shabby-chic types played bocce on carpet, competing to win a coveted set of beautiful blown-glass balls.

When spring rolled around, we were invited to join a game in Loose Park. Our next adventure: playing bocce on a hill, just to see what happens.

But first, we thought we should learn from the people who know the game best, the Italian men and women who gather for league night at the American Sons and Daughters of Columbus on Independence Avenue. They don’t care who thinks bocce is cool. They would, in fact, be surprised to discover that anyone does.

Lesson number one: You’re pronouncing the name of this sport incorrectly. It’s not bah-chee. It’s bo-chee.

Lesson number two: You toss a smallish ball, a pallino, down a grass court. (It could be any piece of grass, but at the Sons and Daughters of Columbus, it’s an AstroTurf lane similar to a bowling lane; between courts, there are benches for spectators.) Then, one team tosses red balls, and another tosses green. You want your own ball to land as close as possible to the pallino. To get tricky, knock one of the other team’s balls away or hit the pallino itself, moving it midgame. The three closest balls score points for their teams.

At 7 p.m. every Wednesday, a group of women meets under the green, white and red awnings of the indoor bocce courts at their clubhouse. On Thursdays, the men do the same.

The men smoke cigars, drink coffee or beer and eat pizza from Hy-Vee. Judy Garland’s voice blares from a TV installed above the tables where they play cards while everyone’s showing up. Some of these guys have white hair and are still trying to understand the technology behind answering machines; their much-younger cohorts are wearing fashionable carpenter jeans and talking about life at college. A woman named Mary pops in just long enough to let her buddy Vince know that she’s planning to play in this summer’s tournament in Chicago and to rib him for not setting her up with any of his friends.

On women’s night, however, Mary sticks around and gets riled up. On Wednesdays, there’s neither cigar smoking nor beer drinking. There’s not even any pizza. Only bocce. One minute, they’re cheering; the next, they’re arguing over who won the point. One of the younger women, frustrated after a miss, yells out, “How do I say it in Italian?”

Linda Corte (who, in her early forties, is one of the youngest women here) explains why she took up bocce after years of sitting on the sidelines. “The older women are getting to the age where they can’t play anymore, and I don’t want the game to disappear. If you don’t carry on the traditions, your kids don’t have anything.”

Corte says they’ve had meetings to figure out how to get more young people to play.

But the way things are going, that doesn’t appear to be a problem.

On men’s night, for example, there’s a 22-year-old player named Jerry Cerna. “This is one of the last cultural institutions that’s uniquely ours,” he says. “People you’ve known all your life, they’re all here.”

But how would Cerna feel if bocce became so mainstream that he turned on the TV to see people playing it on cheesy sitcoms — Friends, for example (R.I.P.)? “I think it would be funny to watch Joey try to teach them all how to play,” he says, though he expresses some frustration with the Joey Tribiani image of Italian-Americans. After a heated debate over whether Friends or The Sopranos is more offensive, he and his fellow bocce players return to the question.

Is it OK for non-Italians to play bocce? Most say fine. Some want to extend a formal invitation — after all, club membership isn’t what it used to be. But one man here is not cool with this.

“Fuck no,” says a swaggering, workout-suit-wearing, cigar-puffing youngster named Rob. “They can’t have it. They can go play cricket.”

“But what about Jeff here,” Cerna pipes in, pointing to a guy in a ball cap sitting at the next bench over. “He’s as white as Wonder Bread, and he still fits in. He makes it work.”

Rob takes his cigar out of his mouth. “There’s an exception to every rule,” he allows.

If you’re a bar regular indulging in bocce at Velvet Dog, or even if you’re just one of the hipsters using a bocce tote as a purse (and we don’t blame you), pay your respects. Pronounce the game the way the Italians do. Learn how to play. And tell your friends, when they take a break to order another round of martinis, where the game comes from.

Do it for Linda and Rob.