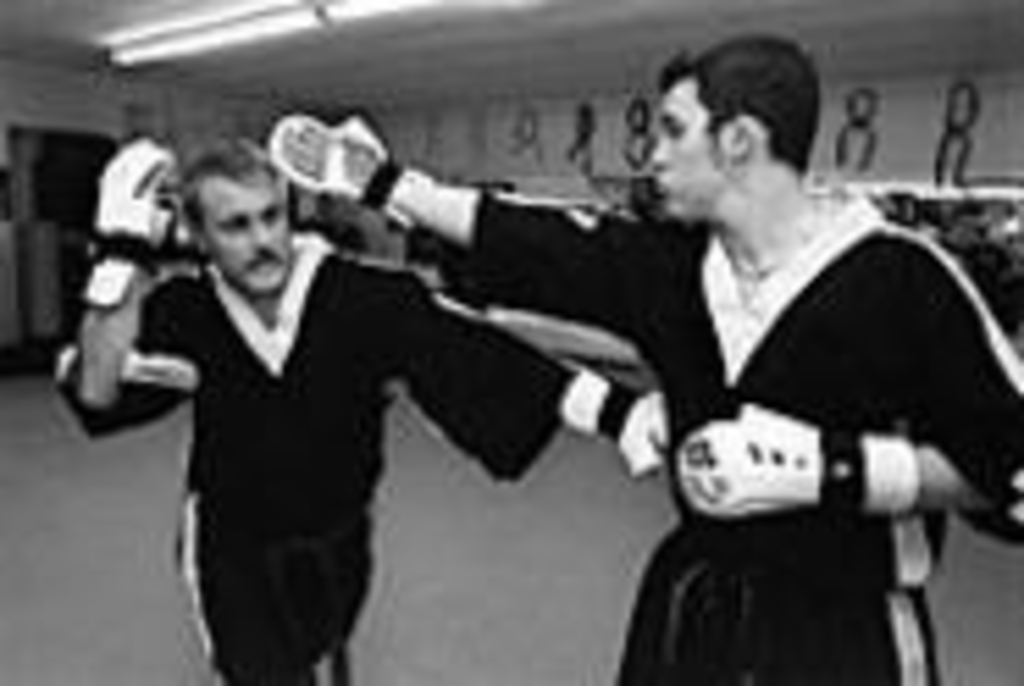 Jarrett Leiker stands erect at midfield, poised to perform in the Park Hill High School drum line as part of the halftime entertainment for the Oak Park football game. The 5-foot-11-inch, 165-pound sophomore blends in anonymously with the rest of his classmates. In his black-and-red band uniform, he looks nothing like a three-time karate world titleholder.

Last month, though, Jarrett and his father, Bob Leiker, traveled to Panama City, Florida, to compete in the National Black Belt League nationals against some of the most decorated black belts in Europe, Mexico, Central America and North America. Jarrett finished in the top three in each of his three events, winning his world title in the “creative weapons” category — performing a series of choreographed leaps, spins and moves that simulate battling an opponent with a 6-foot pole, like Jean-Claude Van Damme shadow-boxing with a spear.

At the same time, Jarrett’s dad took home his sixth world title when he won the super heavyweight division in his age group (35 and up) in sparring, a head-to-head battle between opponents using hands and feet.

Bob Leiker owns World Champion Karate, a teaching studio off 42nd Street and Rainbow in Kansas City, Kansas. A large banner hangs outside the karate school proclaiming Jarrett’s latest world title. “Jarrett has grown up on a karate floor since the age of three,” he says.

The Leiker family traces its karate success back thirty years to Hays, Kansas, where Bob grew up. He was a young boy when he spied a flier for a karate class. Leiker enrolled and, being an athletic kid, immediately took to the art form’s combination of athleticism, speed and mental preparation.

Years later Bob opened his own karate studio in Hays. One day a woman named Jill walked through the door to sign up for lessons. He married her. When Jarrett reached sixth grade, Bob and Jill moved with him and his older brother Jason to Kansas City. “It was really nice not to have to make those four-hour drives to the airport anymore,” Jarrett says.

You don’t become a world champion by competing in Hays, Kansas — or even in Kansas City. Jarrett won his first world title when he was thirteen. This past year, the Leikers traveled to forty weekend tournaments across the United States. The year before, it was 42. Three years ago, they spent 35 weekends away from home in pursuit of karate excellence. Last month’s trip to Florida was Jarrett’s tenth appearance in the karate world games.

Competing at the highest level has taught his son how to handle defeat, Leiker says. “Almost everything that could go wrong for Jarrett has gone wrong in one competition or another,” Leiker says. He’s dropped his weapon, had his ankles broken three different times and suffered other injuries and setbacks. One of those setbacks is the judging.

As in figure skating, karate competitions are judged by a panel of individuals. They give competitors points based on how well they perform specific movements and routines. Leiker believes personal prejudice plays a part in some of the scoring —geographical ties sometimes make it difficult, say, for a Kansas City kid to win in a place like Texas. “He should have won three world titles in Florida, but sometimes things work against you,” Leiker says.

“Some judges just flat cheat,” says Jarrett. “I’ve learned that some days you’re just going to get the shaft. If it happens, it happens.”

Losing can be as important as winning when it comes to raising a competitor. Leiker says his son has learned that it’s not the end of the world when you lose.

Still, warning signs flash and sirens sound in my head when I hear of a parent squandering 80 percent of the family’s weekends traveling the country to compete in youth sports. Is Leiker an out-of-control dad spending thousands of dollars dragging his teen-age son across the country just so he can hang a banner in front of his karate school trumpeting the success of his most prized pupil?

“I don’t think the travel is too much at all,” he adds. “There is always a new lesson to be learned at each competition. There are a lot of positives about traveling to all the cities I’ve been to.”

One of those positives, Bob says, is that Jarrett has been exposed to many races and cultures. “My kid doesn’t know what it means to be a racist,” Leiker says. “He has friends in all cultures.”

Joe Cusack, who teaches freshman algebra at Park Hill, has seen firsthand that Jarrett’s frenetic training and travel haven’t hampered his schoolwork. Jarrett maintains a 4.0 grade-point average; one of his goals is an academic college scholarship.

“Jarrett is a very driven student compared to other first-year students,” says Cusack. “He is very concerned about maintaining A-type work and is always aware of where he ranks in the class standings. He is definitely not shy. He likes to get involved and ask questions.”

But in high school, a three-time black-belt world titleholder who maintains a 4.0 GPA and plays in the band can be more of a target than a hero. At least one of Jarrett’s fellow students saw his three karate world titles as a reason to challenge him.

But Jarrett has never had to use creative weaponry against class bullies.

“He had a problem at school with one kid,” says Jarrett’s father. “But they ended up meeting [at a karate competition], and Jarrett out-pointed the kid 15-1. He didn’t have any more problems after that.”

The Olympic games don’t include karate, but there’s hope that the 2008 Summer Olympics in Beijing will accept it as a medal sport. “My ultimate goal is to win an Olympic gold medal,” Jarrett says.

When that time comes around, he will be mentally as well as physically prepared.

“I always compete with the thought that there is no doubt in my mind that I will win,” Jarrett says. “This removes all reason to be nervous.”