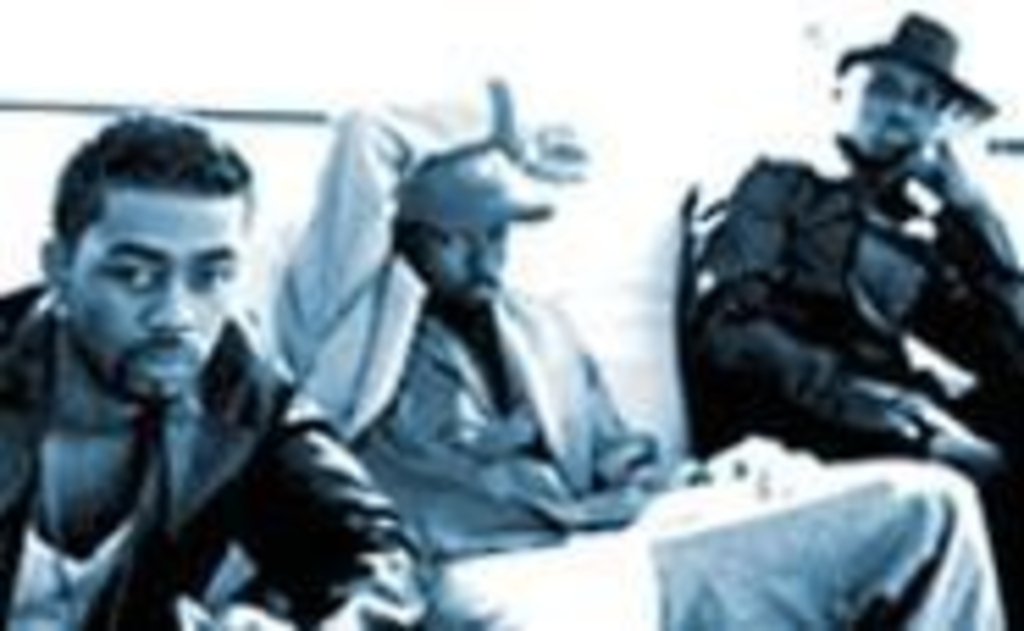 Kansas City natives Marlon “Castor Troy” Hatcher, Keith “Casino” Murrell and Ernest “Bishop” Dixon have written several of today’s hottest R&B songs, but for now artists such as Joe and Koffee Brown reap the benefits while the trio known as Talent pays its bills and waits for its turn in the spotlight. That opportunity might come soon enough; Talent is preparing a promotional tour for its debut album, tentatively titled Bull’s Eye, which is scheduled to be released this spring on Rockland Records, a subsidiary of Interscope. This mix of teen-dream ballads (“Turn to Lies”) and danceable up-tempo tracks (“Breakin’ Up”) is almost finished, but the trio can’t stop tinkering with the tracks. “There are a few more changes we need to make,” says Castor. “We’re adding new songs and deleting old ones. We want the album to be as hot as it can be when it finally comes out.”

Castor and Casino are hanging out in a nondescript recording studio and rehearsal space in midtown. Both look like boy-group members in training. Castor, clutching a cell phone, sports a patchwork leather jacket, dark denim jeans, Timberland boots and a Tommy Hilfiger skull cap. As he speaks in an animated fashion, his shiny metallic watch and the iced-up crucifix dangling from his neck reflect the light in the studio. Casino’s personality is more laid-back, but his wardrobe is just as flashy: He’s rockin’ a caramel-colored velour Sean John sweat suit, and his huge diamond earrings and necklace announce him as hip-hop royalty. The third member, Bishop, is in Atlanta working with the producing duo Neptunes, best known for their trackwork on Jay-Z’s “I Just Wanna Love U (Give It 2 Me)” and Ol’ Dirty Bastard’s “Got Your Money.” Bishop penned Joe’s “Stutter,” which is currently number one on the pop and R&B Billboard charts, and he wrote Profyle’s R&B smash “Liar.”

Not to be outdone, Castor and Casino write constantly. “I prayed that God would give me the talent to write when I was younger, and I just kept doing it,” Castor says. This pair helped Bishop write “Hater’s Disease,” a track from Koffee Brown’s new CD, Mars/Venus; “No Woman, No Man,” a Coko duet with Dave Hollister that will appear on her upcoming solo album; and “Why” for the fledgling group Solo.

“We love going into a room with the lights out and a bunch of candles lit,” Casino says, explaining how the group gets into the mood to write. “When we’re in there, we clear our minds and just think about everything we have been through. Then we grab a Dictaphone, catch a beat or a melody and start spittin’ into the recorder. By the time we come out of the room, it’s ready.”

Talent now seems ready to emerge from behind the scenes to become R&B’s next buzz group. The framed articles from Vibe, Billboard and Black Beat that decorate the walls of the studio tout Talent’s members as up-and-coming stars. Still, these young men know better than to make too much of industry praise or to take impending success for granted. In 1995, the group, then known as K-OS (Kansas City Original Sound), appeared to land a deal with RCA on the strength of a super-hot demo anchored by the single “Bounce.” But before the album’s release, the label restructured, leaving K-OS without a deal.

“It crushed our spirits,” says Castro. “But being the warriors that we are, being in church and having the crew that we have behind us constantly pushing us to be better helped make us stronger.” The group swallowed its pride and started from scratch, making contacts and begging people to listen to the demo. In a desperate ploy, the trio sang “End of the Road,” a song popularized by Boyz II Men, into the phone, leaving the recording on a Rockland Records employee’s voice mail. In a Hollywood-worthy coincidence, superstar R. Kelly heard the performance and immediately offered to take the group under his wing.

“He was so blown away that he called us right back and asked us for a videotape,” Castor says. “We thought he was joking, so we didn’t send him anything. A few days later, he called us back and asked why we hadn’t sent the tape yet.” Soon after sending the videotape, which contained their rendition of “End of the Road” and several other songs, Kelly, who introduced himself to the group as “the mayor of Chicago,” summoned K-OS to meet with him.

“He told us, ‘I’m feelin’ you guys. I feel like God sent you to me. That’s why you guys are out here. I get tapes every day, but you guys stood apart,'” Castor says. “We started recording that night.”

During that trip, Kelly branded the group with an egotistical handle up to which it will forever be required to live. “He said, ‘You guys got talent,'” Casino says. “He said, ‘If you work hard, you can be as big as The Beatles.’ Those were his actual words.”

Still, the crew remained apprehensive about its new identity. “We didn’t really like the name at first because we didn’t understand what he was tryin’ to say,” Castor says. “I’m lovin’ the name now. I couldn’t thank R. Kelly enough for coming up with it.”

All of this happened three years ago. The release of the group’s debut has been on hold while Kelly, its primary producer, has worked on his own material and developed various other groups. Talent has remained patient, taking advantage of this interval to perfect its songwriting craft. But even now, with experience behind it and a superstar in its corner, it will be difficult for Talent to distinguish itself in a boy-band-heavy climate.

“What’s going to separate us is the amount of passion we put into our music,” Castor says. “We are going to work so hard that you’ll be able to see the difference between us and all of the other groups. Besides,” he adds, seemingly with no pun intended, “we have talent.”

“Even if we don’t make it as a group, we’ll always have the ability to write,” Casino adds. “No matter what, we’re going to be in this game, whether we’re singing hits, writing hits or producing hits.”