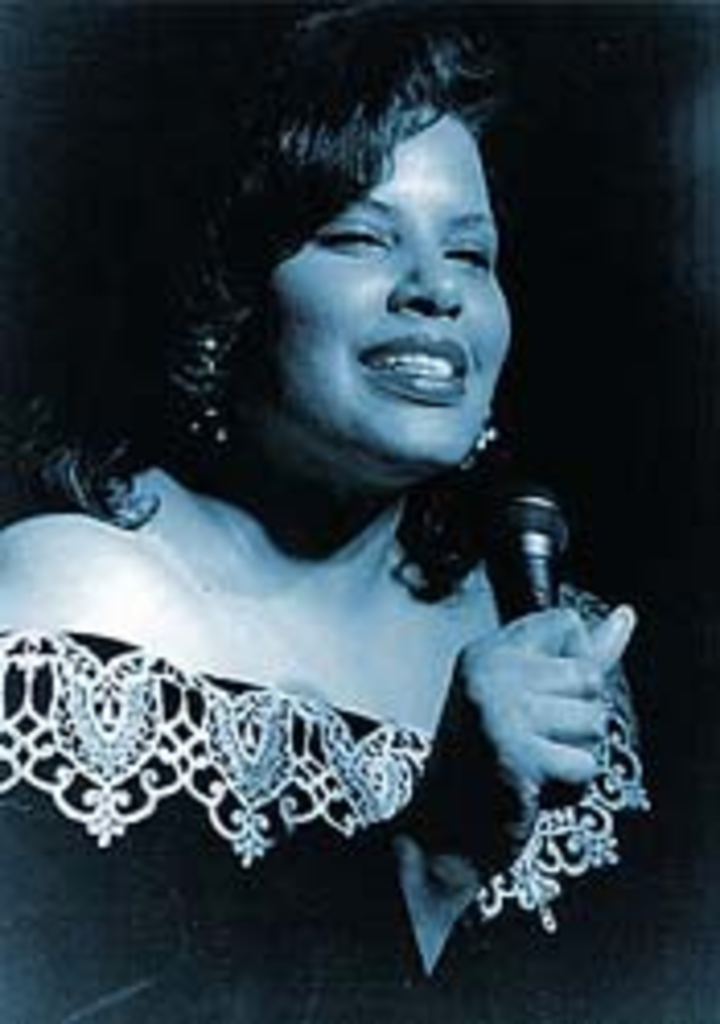 Those who enjoy Quality Hill Playhouse’s usual fare will find Hi Hat Hattie by Larry Parr a nice change for the theater company, especially if they missed its previous production in 1995. Not only do you get the typical review of 16 songs from what may now be appropriately termed “early- to mid-20th-century popular music,” but you get the life story of one of Hollywood’s minor but memorable actresses. Hattie McDaniel is known worldwide as Mammy in Gone With the Wind (and, for better or worse, as the inspiration for the shapely glass bottle for Aunt Jemima’s pancake syrup).

McDaniel had a nice comedic style that is effortlessly mimicked by actress/singer Sharon Thompson. Thompson keeps her strong voice in check, sparing the audience constant bombardment by behemoth, gospel-tinged explosions of sound, but she lets out her gargantuan voice at just the right moments to remind us of the enormous power of such a voice. The songs are best when played for humor, the highlight of the evening being the “duet” with Paul Robeson from the film musical Showboat, “Ah Still Suits Me” (Thompson sings Robeson’s part as well as her own). Other song highlights include “The Kitchen Man,” “Can’t Help Lovin’ That Man,” and a dramatic reading of the poem “Convict Joe.” One odd inclusion is the Irish lament “Danny Boy,” a tired old song that doesn’t quite fit the program.

Thompson shares the stage with pianist J. Kent Barnhart, who also directed the show and is the executive director of Quality Hill Playhouse. There is no interaction between them, however, even though she acknowledges his presence. This is an entirely one-woman show by Thompson, who received the Drama Desk award for best actress in a musical for the 1995 production.

Spanning Hattie McDaniel’s life from 1895 to 1952, the play gives a detailed look at the actress/singer who was a supporting player in 30 Hollywood films and the first African-American to attend the Oscars, where she won an Academy Award for her work in Gone With the Wind. Her career ended sourly with controversy over her appearance as Aunt Jemima in television commercials. Aside from these events, McDaniel’s life isn’t littered with interesting incidents or struggles, but her warm sense of humor makes her good company for an evening’s entertainment.

In 1992 I had the pleasure of seeing the Missouri Repertory Theatre stage Lady Day at Emerson’s Bar & Grill, and I was very impressed with the way music and drama were blended to tell the life story of Billie Holiday. It must have been quite a success, because the following year the Rep staged a similar play about Paul Robeson, and again the year after that about Edith Piaf, and most recently the more expansive musical WMKS: Where Music Kills Sorrow. It’s no secret that in the theater world music makes money, but none of the subsequent productions has had the charm or weight of Lady Day. Perhaps that is because it came first, but Lady Day seemed to hold its own as a dramatic piece of theater rather than a review of Holiday’s most popular songs. It holds as my marker for this type of theater.

There’s no doubt that dozens of plays have been written and performed in this format, but the audience usually gets shortchanged. We are entertained by the music, and we may even learn some history, but not much is going on in the lofty realm of art. These plays are not deeply touching, they don’t resonate in our lives, and they are rarely emotionally engaging. That’s because there are two inherit problems in this watered-down form of musical:

1. Much of the stage time is spent singing songs, which leaves little room for dramatic action or even a sense of story, even when the songs relate to the action.

2. Very often these are one-person shows, and the characters usually spend the time between songs telling stories of their lives. The stories may be enlightening, but as hard as the actors try, they are rarely engaging. (After all, isn’t 99 percent of acting reacting? If you’re all alone on stage, to whom do you react?)

Lady Day succeeded in part because it was as much an event happening in the present tense as it was a retrospective of Holiday’s career, and because the character’s interaction with her band members provided some sense of drama. The songs also seemed to relate directly to Holiday. By recreating a live concert situation where her life suddenly catches up with her, Lady Day managed to overcome many of the obstacles inherent in this form of drama.

Hi Hat Hattie, for all its effort, remains little more than songs and stories.