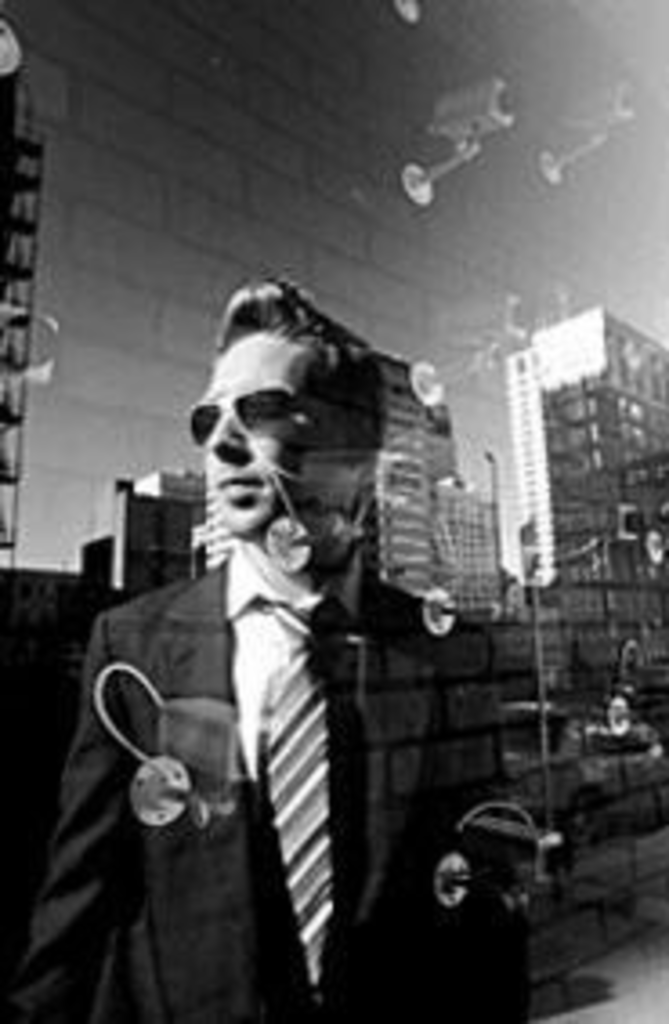 Just because I’m messy doesn’t mean I don’t see your filing systems and your neatly labeled desk drawers, your sock dividers and your shoe racks, your magazines displayed lovingly on your coffee table.

Mine are piled too high on a magazine rack; the resulting glossy avalanche is my own natural disaster. It’s a sight I don’t enjoy coming home to, and until a few weeks ago, it’s one I sure as hell wouldn’t have been able to imagine seeing in an art gallery.

If falling magazines look unattractive, wadded magazine pages should be even uglier, right? Not in the hands of Miles Neidinger, an electrician’s apprentice by day who, given the chance to take up some space in a gallery, makes things that are totally fucking crazy. I’ve seen him make an interlocked mass of bicycles — all steel and chains — look like liquid spilling out of a gallery’s windows.

And for a buzz-generating show called Moving In Is Moving Out — located in a storage facility built by the El Dorado architecture firm in hopes of reviving a blighted Topeka neighborhood — Neidinger has shaped magazines into pinwheel formations he calls “modules.” Each module is a magazine that can, because each page has been fanned out and crumpled, stand on its own. These modules are neatly, symmetrically assembled to form a swirl-patterned rectangle that fills a storage unit. The result, a piece called Every Word Spoken Together in This Room, looks like a mattress. When you see these magazines, you want more than anything to lie down on them — this knowing that the edge of a magazine is not cuddly, won’t hold your weight and is more likely to give you a paper cut than it is a good night’s sleep.

In another unit, Neidinger has stuffed crumpled newspapers into the chicken-wire ceiling. “As far as why did I stuff the paper into chicken wire, a lot of this stuff is based on inclination,” he says. He’s a fidgety person; sometimes he messes with materials simply because they’re in front of him. His goal in this newspaper installation is to treat newspaper as it has never been treated before.

The newspaper he has crumpled is The Topeka Capital-Journal. His choice reflects his urge to connect with the installation’s viewers, whom he had reason to believe would be Topekans. After all, Topeka is no Lawrence. Kansas Citians wouldn’t happen to be in town for a rock show. And though it turns out that plenty of us did make the trek on opening night, the show is still about the FLEX storage facility, and the facility is about Topeka. On every level, the decisions made by participating artists reflect an awareness of that fact.

On opening night, one of Neidinger’s many collaborators on the FLEX project, Jordan Nickel, invited visitors to walk into a room full of T-shirts depicting old-fashioned Topeka-style marquees with slogans such as “RE-MOVE,” “U MOVING ME” and “SERIOUSLY, I’M FREE.” Most visitors understood the instructions to abscond with the T-shirts. (Some required extra prompting.) Older Topeka residents tended to take the shirts as well as the colorful plastic hangers; younger, Kansas City-based viewers pulled the T-shirts off the hangers, sometimes leaving one hanger to hook onto a mobile of others. The piece began as a dense sea of T-shirts and evolved into a light, airy arrangement of plastic hangers.

With his souvenir T-shirts, Nickel was working with the lowest of the lowbrow — I Went to Topeka and All I Got Was This Lousy T-Shirt low. But the way these shirts appeared at the opening was so far removed from the souvenir-shop experience (there was no funnel cake around!) that I didn’t even consider, when snagging my own “RE-MOVE” T-shirt, what that slogan would tell friends and acquaintances when the garment was not in this facility but on my body. I gotta tell you, a day spent telling people that they were not actually invited to take off my shirt was a long one.

But the shirt accomplished what it was supposed to. It made reactions to Nickel’s art as spread-out and slow-moving as a sprawling, Kansas suburb.

I, for one, spent days thinking about how all of the artists — and these two in particular — had transformed the things we all try to hide behind closet doors into things you’d be a fool not to display.

Thinking that there might be no ugly thing these two couldn’t make pretty, I challenged them. When we met at a coffee shop, I was equipped with a plastic bag from Office Max.

I’d gone to Office Max in search of ugly items because, in my experience, office-supply stores contain the ugliest things around, short of well-dressed but gaunt and pale members of indie bands. After strolling around contemplating mouse pads, paper clips and batteries, I approached a salesperson. He asked if he could help me find anything.

“What are the ugliest things in this store?” I asked.

“Some of those calendars are pretty ugly,” he said, pointing to a rack that included a calendar filled with daily affirmations for Atkins dieters. Then he gestured at the poinsettias. “And some of those plants are dying.” Why Office Max has poinsettias remains a mystery; I’m not going to buy a dying plant when I have plenty of those already.

I ran back home and assembled a few ugly items from there — junk mail, aluminum foil. Then I was off to meet my men.

Neidinger ripped up the aluminum foil, rolling the pieces into tiny balls and odd little shapes that he might, given more time, assemble to create something larger.

Nickel thought about foil’s use. “You want to wrap things with this. That’s what aluminum foil is for,” he said, his brow furrowed, his tone sincere. “What is aluminum foil not for?” He spoke of rolling the foil down the sidewalk and letting it stretch out way down the street — though it was raining.

With the batteries and paper clips, Neidinger made electrical circuits, causing them to heat up right there at the table. Meanwhile, Nickel took the batteries out of the ugly box that revealed their coppery, lopsided, super-’70s design and put them inside the soft-looking, baby-blue paper-clip boxes. The non-see-through boxes solved my aesthetic problem. Battery companies should really consider opaque packaging.

Confronted with my junk mail, Neidinger turned AAA’s Midwest Traveler into a module. Nickel studied the text on the envelopes, growing envious that I had received a car insurance solicitation addressed to “Sensible Driver.” and a Genghis Khan advertisement calling me an “independent thinker.” Instead of turning my mail into something else, Nickel took pity and helped me organize it, making use of three paper clips to assemble my junk mail into a neat, modern-looking booklet.