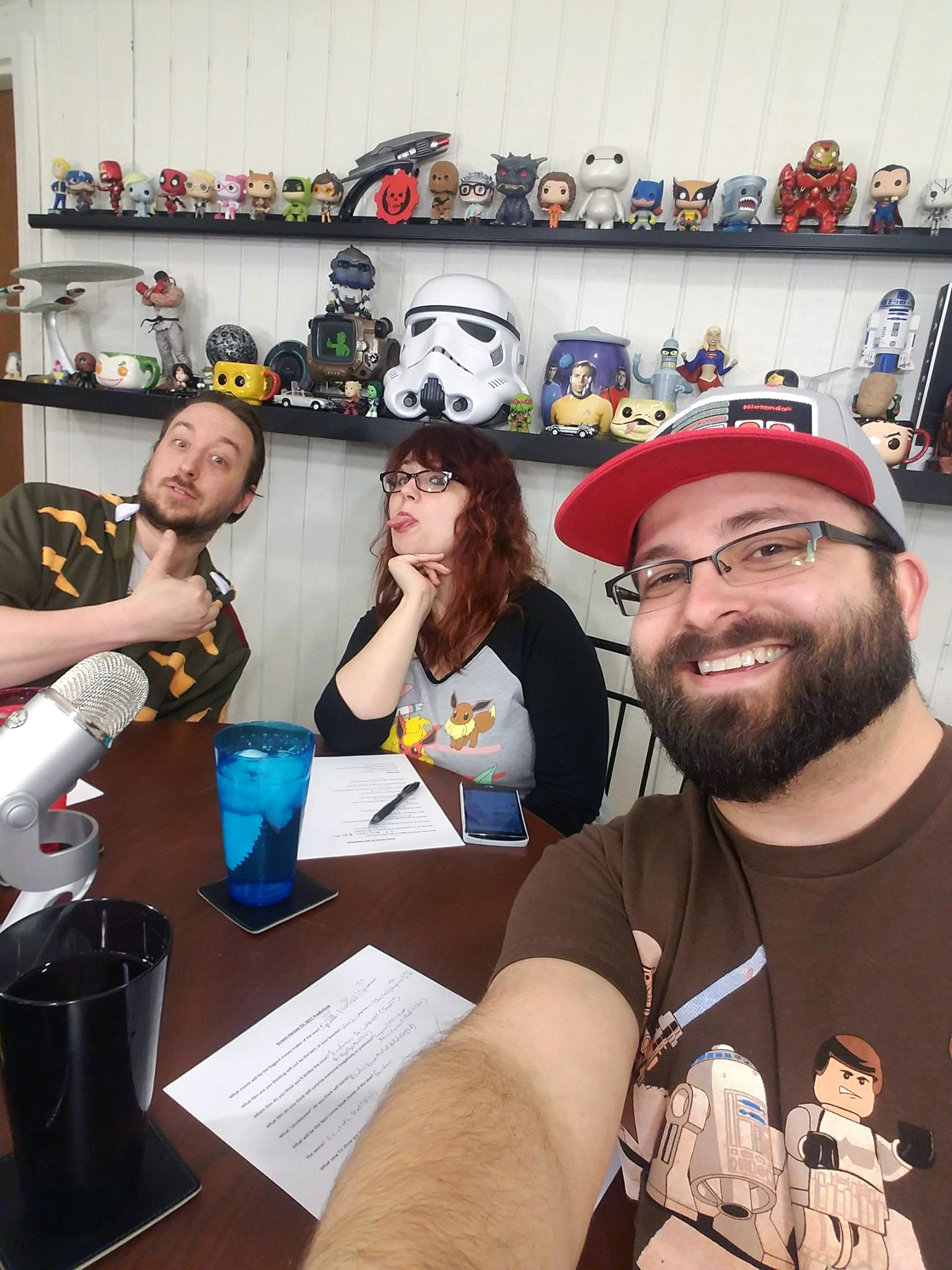 Left to right: Ryan Couture, Rae Mayer/SirynRae, and Derreck Mayer during a recording for the Heroes Podcast Network. // Photo by Derreck Mayer

When you want the latest news on The Flash or Spiderman or even if you like strolling down memory lane with the Teenage Mutant Ninja Turtles, one local podcasting network has the scoop, with plenty of opinions on the side.

The Heroes Podcast Network is the brainchild of Overland Park resident Derreck Mayer and covers everything from fantasy to Star Wars and a whole lot in-between. It started out as an entertainment blog, but Mayer quickly transitioned to an audio format.

“I realized that in order to have content that was consistent but of high-quality that we could keep up, podcasting was more realistic,” Mayer says.

He’d already done a cosplay podcast with his wife, Rae Stewart, and a friend. Stewart came up with the idea for Screen Heroes, a podcast focusing on movies and TV, and the two of them host it, along with their friend, Ryan Couture.

Ian Turner, who co-hosts the Star Wars-focused podcast Echo Station, has been involved from the beginning. He credits Mayer for the network’s longevity thus far.

“He’s the one who founded this. He believes in us, and he believes in what we have to say about Star Wars and whatever,” Turner says.

Although they do have a general outline, the podcasts aren’t scripted and can easily go off on unexpected tangents.

“The great thing about podcasting is that it’s our show, so we can talk about whatever the hell we want to talk about. We talk about everything from the Disney Star Wars era that’s going on right now to the prequels to the original movies… costumes, character profiles, weapon profiles,” Turner says. “There are 40-plus years of Star Wars history to go off of, so it’s basically throwing a dart at a board.”

As genres, science fiction and fantasy often use their fantastical settings to talk about down to earth issues, and the Heroes Podcast Network shows do the same thing.

“We cover topics of human rights and racism and classism and sexism and all these different things. A lot of it we get to talk about because of the allegories that are used in science fiction, in fantasy and the superhero genres, and we couldn’t have those conversations easily without that,” Mayer says.

In addition to figuring out the content, there’s also a technical side to producing the shows.

“I was already familiar with the editing concepts and some of the hardware involved in podcasting, but the only thing that can prepare you for getting better at podcasting is listening to yourself doing it,” Mayer says.

At the beginning, he took hours to edit the podcast, removing each breath sound from the recording.

“The return on that—it’s next to nothing, because the average person is listening in their car on their commute, and if they’re not driving, they’re listening to it on earbuds on a bus or the subway or something like that,” Mayer says. “They don’t really care about hearing the breaths, it turns out.”

But the sound quality still matters. Their first recording area was a study room in the Johnson County Central Library.

“It was kind of a silly set-up. We had memory foam that you put on top of a mattress and put that on the table, and then we had that in the center” of the table to reduce any echo, Mayer says. “You may have great things to say, but if people don’t like the way it sounds digitally they’re not going to give you the time of day.”

Sometimes, recordings go wrong in various ways. Sometimes they feature interviews with writers, actors, or others involved in the various genres.

“When you’re interviewing someone online, you never really know what the conditions are going to be. There was this one situation where we were interviewing this creator, and everything he did was amazing,” Mayer says. “The audio connection was so rough that we ended up having to transcribe the whole thing. We couldn’t release it as a podcast, because you couldn’t hear it.”

Recording podcasts during a time of social distancing is no trouble for Turner—he and co-host Kristina Davis always record online, because Davis lives in Lawrence. It’s more of an adjustment for Mayer, who usually records in person and livestreams the recording of the Screen Heroes podcast.

“We like giving fans something different. It’s a podcast with two LGBTQ+ hosts, so that’s something big we want to bring to the Star Wars fandom and community,” Turner says.

Mayer hopes to add even more diversity to the voices on his network in the future. The Heroes Podcast Network does have a large range in terms of the breadth fandoms it covers.

“We bring such a diverse palette to every single thing we do, whether it’s with gaming, Star Trek, fantasy—we have a bit of nerdiness for each fandom, basically,” Turner says. “I don’t know any other Kansas City group that really does that.”

The Kaiju Curry House, which focuses on film monsters such as Godzilla, is another of the wide swath of nerdy podcasts the network offers. Although most of the podcasts are recorded in the Kansas City area, Kaiju comes to the network from the United Kingdom. It still has ties to the area, as co-host Joe McIntee is a native of the metro area.

Mayer also hosts Red Shirts and Runabouts, a Star Trek-based podcast. But by far the most popular episodes on the network are when Screen Heroes takes a look at films that feature Marvel heroes.

“With very, very few exceptions, our Marvel movie discussions and reviews are the highest listened to episodes to date, because it’s incredibly mainstream,” Mayer says. “A lot of the stuff we can get into gets a little niche. Sometimes, I wish that wasn’t true, because I want the stuff I love to be very popular, but everybody went to go see Avengers Endgame, so everyone’s got an opinion on it.”

There are advantages to the podcasting format. Turner, who has also done a YouTube show, likens it to a voice acting job.

“You don’t have to worry about what you look like when you record through a microphone,” he says

Mayer doesn’t have statistics on his audience beyond location and device, but “it’s definitely more of the core nerd group. That was kind of the point. Definitely people who argue about continuity issues in the [Marvel cinematic universe], what’s canon in Star Trek—those types of people,” says Mayer, who counts himself among them.

Before the algorithms changed on Facebook, “Maybe 150 percent of the people who followed our page would see our posts, which was great. We were always being shown to new people,” Mayer says. Now, if they’re lucky, it’s closer to 10 percent, and more promotion takes money—which in the podcast world is hard to come by.

They still get good engagement via Twitter, Mayer says. He recently started a Facebook group in addition to the main page, which allows for more interaction and discussion. When they livestream the Screen Heroes recordings, podcast fans can also interact with the hosts in real-time.

“The biggest challenge is continuing to push forward when sometimes it sounds like you’re talking to a void, because it is difficult to know what the listeners are really thinking and who’s really paying attention,” Mayer says.

Turner, who hosted a panel with Davis at Planet Comicon last year, also craves that interaction.

“We got a few iTunes reviews, all positive things. That is the fire that drives us still. We do this for ourselves. We do it for fans as well, like-minded fans especially,” Turner says.

He was set to host a panel at this year’s Planet Comicon and still plans to when the convention, currently rescheduled for August, happens.

Conventions provide a unique opportunity for podcasters like Mayer and Turner to connect with their audiences.

“We purposely make most of our panels interactive,” Mayer says.

One panel he led at a previous convention was a giant discussion with the audience as to which characters from any incarnation of Star Trek would make up the ultimate crew.

“We’re not arguing about canon; we’re not arguing about the writing or the directing. We’re talking about these characters as if they were real people in a room,” Mayer says. “Who would you want on your ship? People have some amazing points to make, and sometimes the crew that we end up with is not anywhere near what you thought it would be. And it’s never the same.”