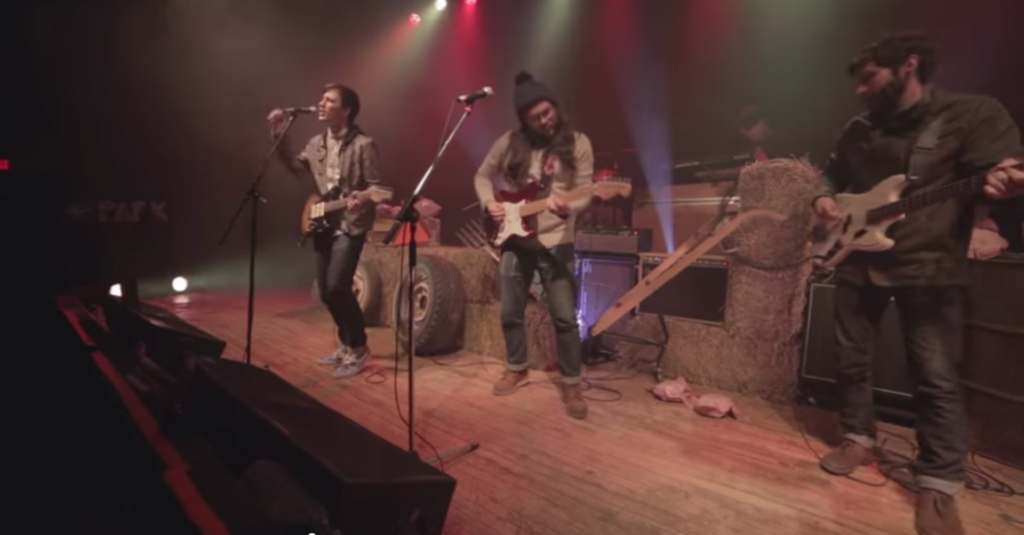 This month’s round-up of local videos is pretty heavy on new music. In fact, some of it is so new, these videos are the only place you can hear it. Be it dreamy hip-hop (Maal A Goomba), power-pop (Josh Berwanger Band), or twangy bluegrass (Monzie Leo & the Big Sky), we’ve wrangled up a slew of fresh tunes to put in your ears while your eyes check out some great visuals. All this newness makes for a very refreshing installment of Cine Local.

Videos with a storyline are always a little more entertaining, especially when done well. The direction from Spencer Higginson on this new track even offers up a nice excuse for playing in an empty Granada. It looks pretty amazing, and there’s just something wonderful about a band willing to take themselves less than seriously. This could have been the worst kind of self-indulgence, and it’s just delightfully silly. “Hamboree.” I’m still giggling.

No lie: you see a guy in a helmet, nodding to the beat, and you start to wonder if this a very belated “Harlem Shake” video. Happily, this dreamy, off-kilter track from Maal A Goomba is paired with an equally-similar video. As near as we can tell, Maal is still based in Lawrence, and putting out music via Team Bear Club’s Bear Club Music Group. This cut is off last September’s Mondays EP, and features production by Helix.

“Guess You Weren’t Wrong” is a new song from the power-pop quartet, from the band’s forthcoming second album. This version was recorded live in the 90.9 the Bridge studios as part of the Eight One Sixty Sessions, and if you’ve been seeing the band play live, you’ve likely had a chance to hear it yourself. For those who’ve not, this is something a little more restrained from the band. It’s not quite a ballad, but it’s close.

Monzie Leo & the Big Sky may have put out Sunsets, Sunflowers, and Sons of Bitches a scant six months ago, but there’s already new music trickling out. This little number popped up on their Facebook page a couple weeks back, and it perfectly reflects the band — they’re playing in a field, smiling their faces off, and playing the absolute hell out of this number. We’re all fired up for the next album.

Recorded live at in the offices of advertising agency VML for last year’s TEDxKC conference, this is a powerful and intense version of the song from Not A Planet’s The Few, The Proud, The Strange. It’s fun to watch the folks in the hallway watch them, and disorienting to watch the view from the GoPro attached to Nathan Corsi’s guitar, but it’s an excellent way to see the band, any way you look at it.

Did you miss last month’s Cine Local? Peep it here.