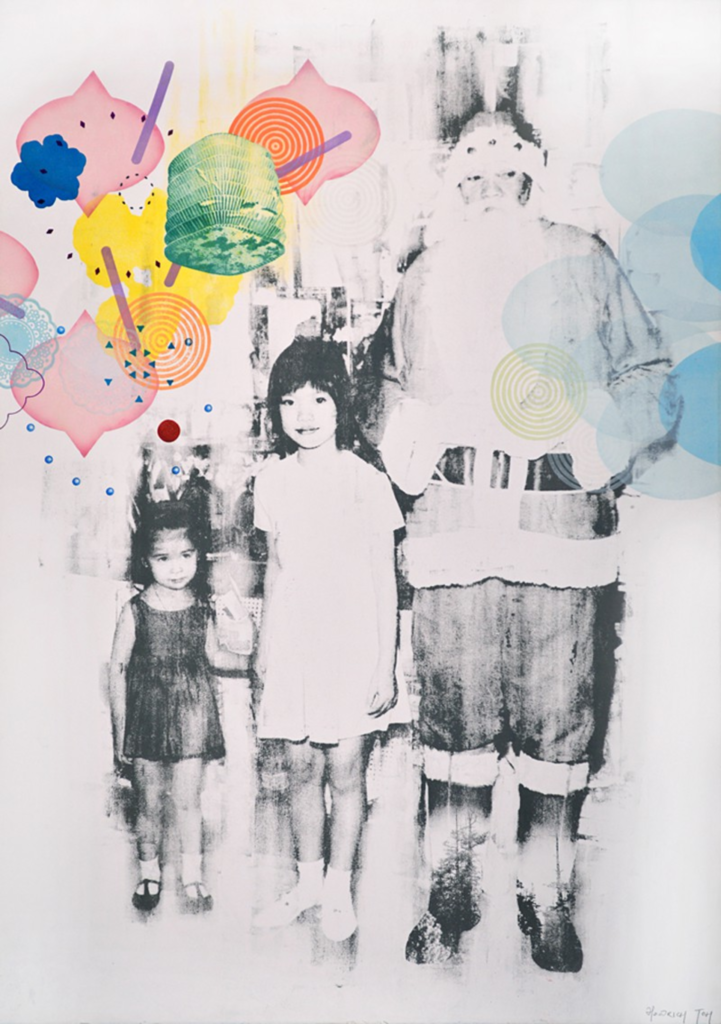 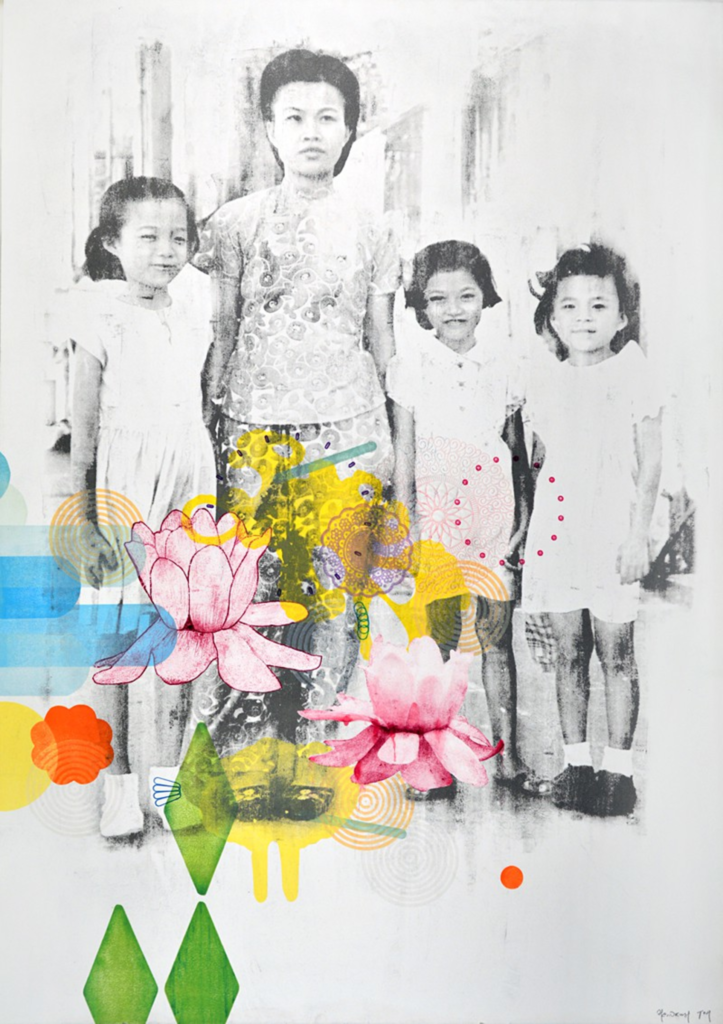 How much of identity is based on memory? And how much do our memories rely on depictions of the events that form our personal narratives? There is an eerie universality to old family photographs — a collective recall that printmaker Heinrich Toh uses to his advantage in his exhibition Momentary Longing. One viewer, Toh said, had a hard time convincing herself that she wasn’t looking at one of her own relatives in a piece here at the Leedy-Voulkos Art Center.

To assemble his layered etchings, Toh uses predigital printed pictures sourced from thrift stores in the United States and Singapore, the artist’s cultural poles. He chooses images that show both candid and posed scenes of family life, and we see people or places that any of us might recognize: a dinner-table scene, a couple flanking a costumed rabbit and Alice at Disneyland, a girl beaming at us over a birthday sheet cake. We see group shots of a basketball team, a football team and a class of Catholic schoolgirls.

Before this exhibition, most of the photographs he chose depicted his own family members. Momentary Longing marks the first time he has shown works that include Caucasians; in what he says is an expression of assimilation, we now see, among others, folks from the childhood of his wife, Cheryl Toh, an artist who grew up in the United States.

Toh wonders whether non-Asians will see versions of themselves in the photos of Asian people (and vice versa). Living in the Midwest, he says, is noticeably different from the time he spent on the West Coast, where people from Asia are not as much a minority as they are in Kansas City.

The commingling of East and West is front and center in the base image of “It’s All a Lie.” Who has not felt the deep disappointment of a childhood belief shattered by reality? Two little girls of Asian heritage stand together next to Santa Claus, also evidently Asian but dressed in the typical fur suit that would make literal sense only up in the mountains. Etched into his boots are shadowy silhouettes of pine trees, and the orange, green, yellow and pink shapes balancing the figures are reminiscent of Christmas ornaments and a Chinese lantern. The sense of foreboding would be clear even if this Santa wasn’t gazing off to the side: that someday these kids will have to confront the fact that there is no Santa — and that the fictional Santa isn’t Asian.

A young man wearing a military uniform looks as though he could be of any heritage. He’s pointing, and Toh has given him something new to point toward: lantern shapes peppered in the foreground beneath an older woman on a mobility scooter. Both people are smiling, but Toh has shaped the image’s narrative with the title, “But, Grandma, It’s a Minefield” — a playful reminder of the difficulties inherent in navigating our cultural identities and interactions.

The longhaired, smiling girl in “The Beautiful One” is a face that any of us might recognize while flipping through photo albums filled with physical proof of our own childhood birthday parties. Behind her is a gridded background that represents the greenhouse of Cheryl’s grandfather; beyond that personal association, the piece works on its own visual terms, as do the colorful spiraled objects superimposed. These are zanfirico canes — Italian tools used for making a kind of blown glass — in homage to Cheryl’s ethnic heritage and to Heinrich’s own past as a glass artist.

Another image that shows up in more than one work is a red-and-white-striped paper party cup. It’s now considered retro, Toh says, but its implications — of celebration, formal and fleeting — remain meaningful.

Viewers can pick out plenty of associations on their own, and Toh’s titles offer glimpses into the dark side of these slowly fading images. He has superimposed red and white pinwheels above the youthful heads of a U.S. school’s football team in “Bit Between Their Teeth,” and you might recognize the Tiger Balm ointment logo charging above the players. Toh says he’s fascinated with the way that American sports teams choose their mascots; there are no tigers in this country, for one thing, but the Chiefs, the Braves and the Redskins are even more curious as cultural appropriations.

In contrast to the people around the room is a series of eight “Passing Dream” prints of places. These subtle, postcardlike scenes — of treed landscapes, temples and the surreal structures of Singapore’s Gardens by the Bay — come from photos that Toh has taken during his own travels. Using his layered printing techniques, he presents places that echo with the familiar, even when you’ve never been there to see them yourself. No matter where we are from, we can live in only one place at a time. And no matter where we visit, each experience is unique and impossible to repeat.

“They are the memory of a place I’ve been,” Toh says, “and they will never be the same again.”