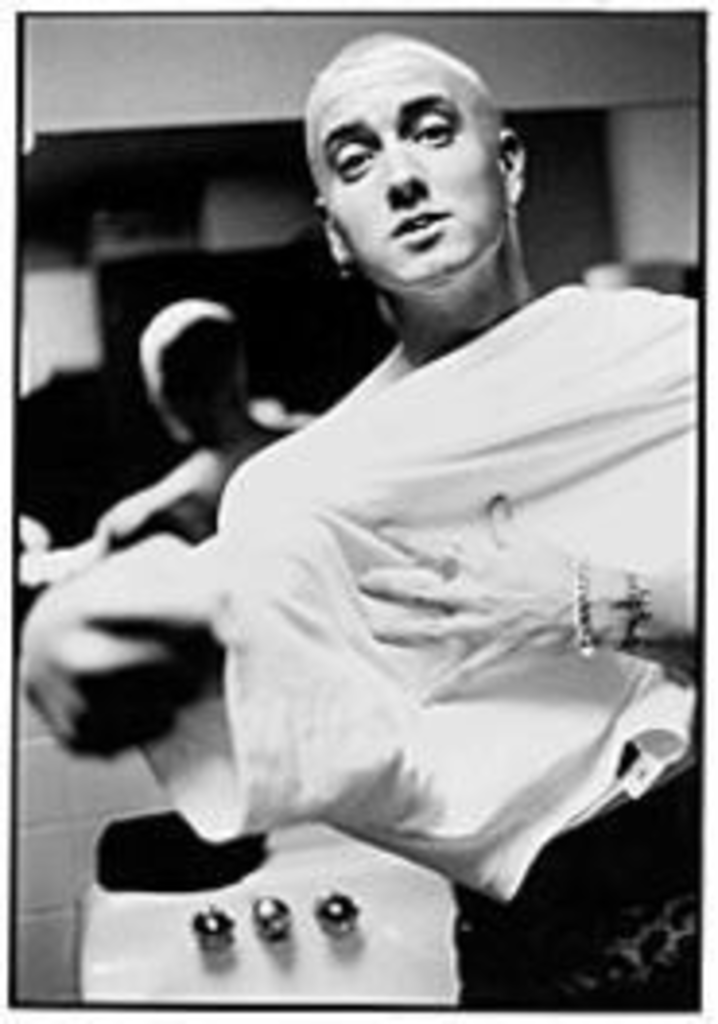 How popular has Eamon’s foul-mouthed breakup song “F*** It (I Don’t Want You Back)” become? All you need to know is that even the song’s subject — the ex-girlfriend addressed throughout as a “ho” and a “burnt bitch” — loves it.

Of course, Eamon is quick to note that the young lady in question doesn’t actually realize that the bitter little ditty, a left-field blend of doo-wop and hip-hop that topped the pop charts, is about her.

Now 20, the brash Staten Island native is undaunted by criticism of his cussing. “When my grandmother heard it, she said, ‘Are you crazy?'” Eamon says. “But she’s my biggest fan. She still tapes my song every time it comes on the radio. And now she tells me, ‘Watch out for those hos on the road!'”

“A lot of motherfuckers out there don’t say what they mean,” Eamon continues. “I do.”

Yet even though Eamon has taken four-letter kiss-offs to a new high on the pop charts, he’s hardly the first artist to pen a breakup song that requires a parental-advisory sticker. The past decade, in fact, has seen dozens of rude, crude and thoroughly nasty ways to leave your lover. We’ve picked a select few. If you can track them all down (without, of course, resorting to illegal downloads), they make one vengeful compilation CD.

The Story: With apologies to Eamon and everyone else on this list, there’s really no topping this one. Even if you weren’t aware of the utterly twisted history that links Marshall Mathers and his ex-wife, this 6-minute murder fantasy would clue you in that no amount of counseling, medication or Dr. Phil could have saved this marriage.

The Kiss-Off: Sit down, bitch!/You move again, I beat the shit outta you!

The Story: Part of Green Day’s megaselling Dookie, “F.O.D.” — a genteel abbreviation for “Fuck Off and Die” — struck a blow for every second-generation punk left holding his own.

The Kiss-Off: You’re just a fuck/I can’t explain it, ’cause I think you suck/I’m taking pride in telling you to fuck off and die.

The Story: A typical Weenian juxtaposition: an upturned middle finger hidden within a pretty folk song. A gentle way to suggest that an ex-lover perform an act known to be a physical impossibility.

The Story: In a sign of how far popular culture has devolved over the past decade, recall that when former teen star Alanis Morissette plaintively inquired whether her ex’s new girlfriend would “go down on [him] in a theater,” it caused something of a sensation. How quaint.

The Kiss-Off: It was a slap on the face/How quickly I was replaced/Are you thinking of me when you fuck her?

The Story: Even though he was initially branded an angry young man, piano man Ben Folds also drew plenty of comparisons to soft-rocking icons Elton John and Billy Joel. This tune showed that wouldn’t be banished to the lite-FM graveyard without a fight.

The Kiss-Off: So you wanted to take a break/Slow it down some/And have some space?/Well fuck you, too.

The Story: No genre offers more X-rated potential breakup songs than hip-hop; the problem is establishing context. Does a composition qualify as an authentic breakup song if it concerns a groupie you met, plowed and discarded within the past 15 minutes? We must answer no, thus eliminating untold worthy candidates from this list. But if the female in question lasted long enough to get knocked up, look out.

The Kiss-Off: No, I ain’t bitter, I don’t give a fuck/But I’ma tell you like this, bitch/You better not walk in front of my tour bus.

The Story: Puddle of Mudd’s brief heyday as nü-metal flavor of the moment came on the strength of this single. A musical crib from Nirvana and a misogynistic lyrical nod to the band’s patron, Fred Durst, “She Hates Me” is one of those songs that really would be nothing without its profanity.

The Kiss-Off: Then I started to realize/I was living one big lie/She fuckin’ hates me.

The Story: This is the song on which Atmosphere frontman Slug finally comes to grips with his fixation on Lucy Ford, a character that had played a large role in the Minneapolis hip-hop group’s discography. A breakup song for the closet neurotic obsessive in all of us.

The Kiss-Off: Fuck you, Lucy for defining my existence/Fuck you and your differences.

The Story: This isn’t really a breakup song — that would imply that filth-loving hardcore legend G.G. Allin had the ability to care about another human being. Still, it doesn’t seem quite right to assemble this list without paying a tribute of sorts to this genuinely angry, often miserable, always X-rated artist.

The Kiss-Off: Before I die, I hope I do/Kill many more, as I’ve killed you.

The Story: An answer record in the grand hip-hop tradition, this song — which purports to be by Eamon’s ex-girlfriend — is so tacky, you can’t help but love it.

The Kiss-Off: I had to do your friend/Now you want me to come back/You must be smokin’ crack.