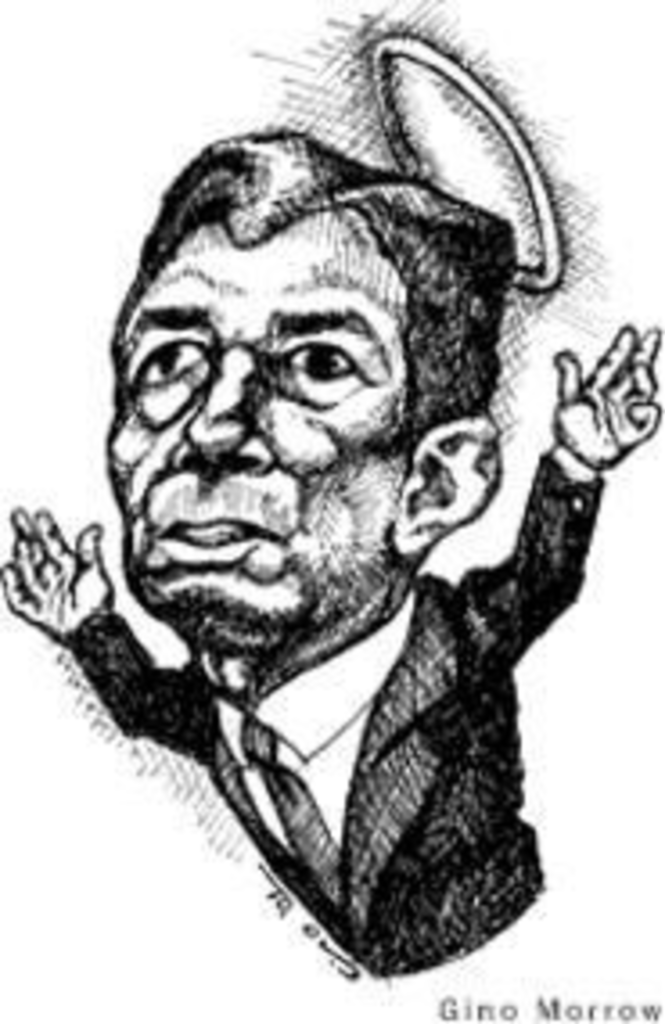 And it came to pass during the eleventh month of the last year of the second millennium of our Lord that a dead man rose up and slew the prophet John Ashcroft.

Yet it is written in his own hand that he shall be reborn: “Every time I have ever run for something and lost, some type of ‘resurrection’ has followed.”

Now he tarries until, in the fullness of time, Congress blesses his nomination as United States Attorney General.

Though steeped in his father’s politically awkward Assembly of God faith, Ashcroft has ascended to heights of earthly principalities that Pentecostals do not normally reach. Televangelist Pat Robertson surely has not; neither his holy media empire nor his tumescent lust for the presidency has been great enough to overcome his minority status as a Pentecostal.

But Ashcroft rarely puts his faith on television. In his book, Lessons from a Father to His Son (1998, Thomas Nelson Publishers), he doesn’t even name it.

Not once in Lessons does Ashcroft mention speaking in tongues — the signature Pentecostal experience of those who adhere to the AG faith — although he doubtless spent many hot teenage nights at church and youth-camp altars, his arms in the air as he begged for the Holy Ghost while his father waited expectantly to hear the sounds of the Spirit.

Politically, it makes no sense for Ashcroft to boast about consorting with spirit-possessed flocks whose tongues wag freely with incomprehensible phonics. He wants the votes, after all, of anti-abortion Catholics, Baptists and Mormons, who outnumber Assembly of God folks both in Congress and in real life.

Baptists, in particular, revile worshippers who can’t control their tongues. “There are churches in the state of Georgia practicing being slain in the spirit, barking like dogs, roaring like lions,” one delegate to the Georgia Baptist Convention told the Associated Press in 1998, amid debate on whether to excommunicate charismatics (Pentecostals lurking in other denominations) and homosexuals. “They ought not to be doing this and calling themselves Baptists.” Ironically, Ashcroft had preached to the convention’s opening session as part of a campaign stop.

Although Ashcroft was a Republican candidate for president at the time Lessons came out, he told reporters he wrote the book not with his campaign in mind but to honor his father and preserve the man’s legacy. (J. Robert Ashcroft died in early 1995 in Kansas City, on his way home from the senator’s swearing-in ceremony.)

The book doesn’t say that the senior Ashcroft was an Assembly of God preacher and president of several of the denomination’s colleges. (Ashcroft writes merely that his father’s employer was a “Christian liberal arts college.”) Nor does it mention that John Ashcroft was among the founders of an Assembly of God congregation in Washington, D.C. Back home in Springfield, Missouri, Ashcroft has called Central Assembly of God — the denomination’s mecca — his church home virtually all of his life, but the book doesn’t say that, either.

Ashcroft’s sole mention of the Assembly of God in Lessons occurs on page 185 — just 29 pages from the end, and it is as casual as it is contrived: “If you want to go to church tomorrow, I’ll go wherever you want to attend,” Senator Jim Jeffords of Vermont says when Ashcroft visits his state. “Well, let’s go to the local Assembly of God,” Ashcroft suggests.

Assembly of God historians date their movement’s beginning to one hundred years ago, when a “queer religion” caught the attention of a Topeka headline writer. The news story spoke of an itinerant preacher, Charles Fox Parham, who had led prayers day after day in an unfinished stone mansion in the capital city until some worshippers began to form sounds that did not sound like English. On New Year’s Eve, as the calendar flipped to 1901, Sister Agnes N. Ozman asked Parham to pray for her.

Parham later wrote, “I had scarcely repeated three dozen sentences when a glory fell upon her, a halo seemed to surround her head and face, and she began speaking in the Chinese language and was unable to speak English for three days.”

“Chinese?!” squeaked a seemingly incredulous Pat Robertson, although he surely had heard this story before. It was January 4, 2001, and one of Robertson’s sidekicks had just recounted the Parham testimony during a segment on The 700 Club. Robertson lamented that the 100th anniversary of North American Pentecostalism had passed uncelebrated just days earlier.

Yet mention of Parham makes Pentecostals squirm, in part because soon after tongues started flowing, a competing evangelist in another state accused the faith’s Great White Father of homosexual behavior, probably falsely.

More problematic is Parham’s doctrine that tongue-talkers should speak in an existing foreign language as proof of Holy Spirit possession, a rather impractical expectation for those who have not learned a second language beforehand. The AG has a more liberal (!) understanding: When the Spirit fills you, you probably will speak in tongues, but it can be any language or no language, as long as it’s unintelligible to all but one other worshipper, who is expected to deliver God’s interpretation of the message.

Black Pentecostals have the greatest grievance against Parham, for he was a Ku Klux Klan sympathizer who preached segregation of Pentecostals and refused a seat in his Bible school to one young black man who ardently desired baptism in the spirit. Standing in the school’s hallway, listening through a door left ajar, William J. Seymour added Parham’s teachings to his own expansive understanding of New Testament phenomena. Seymour ultimately opened a mission on Azusa Street in Los Angeles where, beginning in 1906, people of all races came to speak in tongues.

The races nonetheless separated as Pentecostalism spread beyond Los Angeles. Though willing to endure persecution for speaking in tongues, southern white Pentecostals were not willing be caught worshipping with blacks. A group of whites voted to form the Assembly of God without inviting any African-American Pentecostals to their Arkansas convention in 1913.

With a distant, paternalistic sweetness, Ashcroft discusses his early contacts with black people. His father taught him to listen to black preachers on the radio and to appreciate singer Mahalia Jackson on the hi-fi. Eventually, Ashcroft met some blacks: When an African visited from the far-off mission field, Ashcroft’s mother let the man rake the leaves after he’d been a houseguest for three days.

Ashcroft’s book names no blacks who are not athletes, preachers, musicians or writers. His signature approved the Martin Luther King holiday in Missouri and protected the Scott Joplin house in Sedalia, he reminds reporters. Yet in a 1998 interview in Southern Partisan magazine, Ashcroft honored the motives of traitors who fought against the United States for the right to own slaves: “You’ve got a heritage of … defending Southern patriots like Robert E. Lee, Stonewall Jackson and Jefferson Davis. We’ve all got to stand up and speak in this respect or else we’ll be taught that these people were giving their lives, subscribing their sacred fortunes and their honor, to some perverted agenda.”

Lest readers worry that he was raised to be a bigot, in his book Ashcroft memorializes his father’s position on interracial marriage: “‘John, what would be trouble is if you married someone outside your faith.’ This was my father’s way of telling me that what really mattered was not skin color but the condition of a person’s heart.” But following this advice, John Ashcroft would have had almost no chance of marrying a black woman from the nearly pure-white American Assembly of God.

Much of his book is conservatively understated, punctuated with an occasional passionate sentence: “Just because a murderer has learned to love the Lord does not mean the state should pardon him,” he writes, explaining why as Missouri governor he did not spare the life of a repentant condemned man whose wife attended Ashcroft’s church. And “the best way for me to teach my children sexual purity was to guard against premarital sexual activity myself and thus teach by example,” says a passage in the chapter on delaying gratification.

Thus championing the issues of the Religious Right and minimizing the peculiar aspects of his faith, Ashcroft has won the support of white, Bible-believing evangelicals and fundamentalists, who distrust Pentecostals’ inclination toward supplementing God’s written word with messages in tongues. Mormons too have cast their lot with Ashcroft, though Pentecostals regard the Book of Mormon as rank heresy. Blest be the ties that bind these enemies together: opposition to homosexuality, abortion and gun control.

Though hired time and again to tend to the earthly affairs of Missourians and Americans, Ashcroft makes it clear that he conducts government business with concern for his own eternal enrichment: “At the end of my life, what matters most will not be whether I warrant a footnote in some historian’s tirade but whether the God who blessed me on Earth will remember me in heaven, giving me the ultimate validation, ‘Well done, thou good and faithful servant.'”

Ashcroft declined to speak with the Pitch. But he has a favorite, Clintonesque response for reporters who probe too vigorously into his faith: “It’s against my religion to impose my religion on people.” Yet by rebuffing inquiry into his beliefs and by muting understanding of his Pentecostal heritage, he frees himself to do exactly that — impose his religion on people through the law — without discovery.

Ashcroft likes to be anointed with oil before taking office. That droplet on a dipstick might be okay. Crisco sufficed in 1995.

Olive oil, though, is mentioned in the Bible and comes in lovely containers that look almost holy. So in the next few weeks, someone from the Ashcroft camp likely will rush to a Washington grocer to pick up a bottle. In a church or prayer room or hotel ballroom, a pious man will dab some on his finger and make a small smear on John Ashcroft’s forehead as the AG from the AG church kneels. Friends and family will draw nigh. Those nearest will each raise one arm like an antenna toward heaven and place their other hand on Brother Ashcroft’s head, shoulder or back. The room will be filled with loud, ardent prayers, perhaps even a message in tongues that is dutifully interpreted by a second speaker.

The Office of the United States Attorney General will be dedicated to the God of John Ashcroft.

The resurrection will be complete.