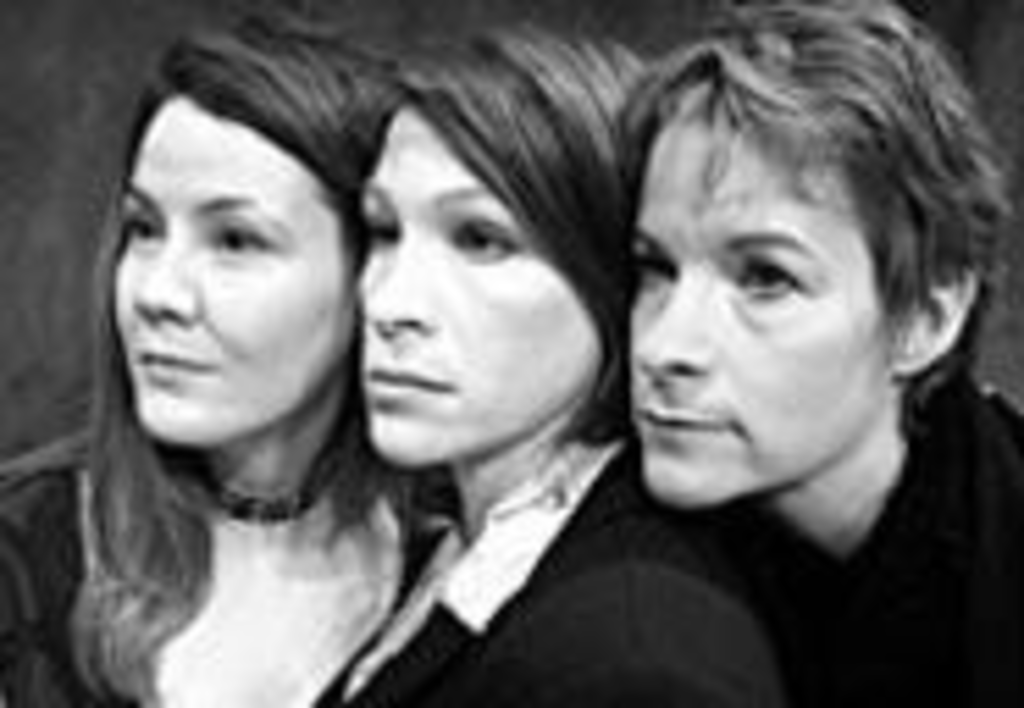 Every character in every play has a back story — a history the audience doesn’t see but discovers as the actors flesh out their roles. In the Unicorn Theatre’s production of Shelagh Stephenson’s black comedy The Memory of Water, about a reunion of three sisters on the eve of their mother’s funeral, the back story takes its sweet time settling in. (At intermission, a season-ticket holder asked me, “Who are these people?”) The less-than-riveting result is a tale about people we come to know only as they near their curtain calls. The show has some pep, a few laughs and a hurricane-strength scene in the second act, yet it seems to begin just as it’s winding down.

The play opens in the late mother’s bedroom at a home in northern England. Mary (Cheryl Weaver) is still in bed, hungover on life in general, while her chipper sister, Teresa (Elizabeth Robbins), has been up since the crack of dawn, no doubt making bee-pollen pancakes and pussy-willow tea. The doctor and the health-food entrepreneur, respectively, await the arrival of their decade-younger sister, Catherine (Sarah Crawford), the family bohemian and perpetual pot smoker.

The men in their lives sneak into the plot in ways that seem more measured than lived. Mary’s friend and fellow doctor, Mike (David Fritts), happens to have a wife already; Teresa’s husband, Frank (Dan Barnett), enters later after a business trip to Düsseldorf, where he’s been peddling their natural groceries. Only Catherine’s boyfriend doesn’t make it. But then, he’s merely the latest charm on a very long bracelet.

Vi, the mother they’ve gathered to cremate, shows herself only to Mary (the play never explains this selectivity). Played by Merle Moores, Vi appears in three scenes, wearing a 1950s party dress for two of them and a dowdy bathrobe and gray wig for the last — this was Vi near the end, when Alzheimer’s had worn her down.

As sisters are wont to do in family plays, the three women alternate between romping around giddily and lacerating one another in fights. (In one of the play’s phoniest, most meaningless lines, Mary says, “We don’t argue. We bicker.” Yeah, well, Roget’s Thesaurus will tell you they’re the same thing.) Over the years, Mary and Teresa, the elder two, have harbored layers of bitterness and jealousy, which come spewing out of Teresa in a ferocious second-act harangue that has Robbins doing her best work in years. But only in this scene does an actor truly disappear into a character.

Under Cynthia Levin’s direction, the rest of the cast isn’t bad, really, just guilty of showing the acting rather than acting the show. The evening I saw the play appeared to be an off night for all, with actors fumbling props and stumbling over lines. Accents were more than inconsistent as well; the British clip was entirely absent from some speeches. These glitches lent a bumpy, stop-and-go feeling to a play that needs to trot.

Atif Rome’s set offers more than meets the eye when, in two scenes, the wallpapered back wall becomes diaphanous for some video footage at the rear of the stage. But like some of the lines and jokes, it’s there because it was concocted to be there — without any connection to something greater. Jeffrey Cady’s complex lighting design is professionally rendered, as are Jennifer Myers Ecton’s costumes, which reveal just as many traits about the sisters as their dialogue.

Postscript: The night Bill Clinton and Bob Dole helped 60 Minutes charge back into the Nielsen Top 10, a commercial following their segment captured another rivalry, the one between KU and MU that’s always more intense during hoops season. The ad for Ford Explorers featured two dudes rolling up to a stop sign somewhere on the Missouri map. The Jayhawk fan driving one SUV is former Kansas City actor Jason Chanos, who comes back to town this summer to play the daunting title role in the Heart of America Shakespeare Festival’s Hamlet.

“We filmed [the commercial] here in the Denver area,” Chanos tells me by phone from the city where he grew up and to which he recently returned. “I knew it would run regionally, obviously, but not exactly where. 60 Minutes is cool.”

The ad, which has been running for several weeks, shows a pleased Chanos holding up a stuffed Mizzou tiger by a noose while his foe bites into a toy Jayhawk. He’s done several other commercials since landing in Denver but is excited by what’s been called the actor’s dream role awaiting him this summer. Yet he didn’t immediately take the job.

“They called to offer it to me cold turkey; I didn’t audition,” he says. “They said, ‘We had you in mind. What do you think?’ But I had just settled in Denver because I had never explored the professional possibilities here. I knew I needed to set up camp here and thought, if I commit to this, what else will I be turning down?”

Chanos says he soon wised up. “The light bulb went off, and I said, ‘My God, I may never have the chance to do that again,'” he recalls, adding that an actor’s window of opportunity for playing Hamlet is limited. “There’s debate about how old Hamlet is supposed to be. Some say thirty, but then he’s referred to as a student. I’m thirty but look younger, so I can sell both.

“Plus, I looked at who I’d be backed up by: Mark and Elizabeth Robbins, Phil Fiorini, Jan Rogge, Cinnamon Schultz, Brian Paulette, Robert Gibby Brand, and on and on.”