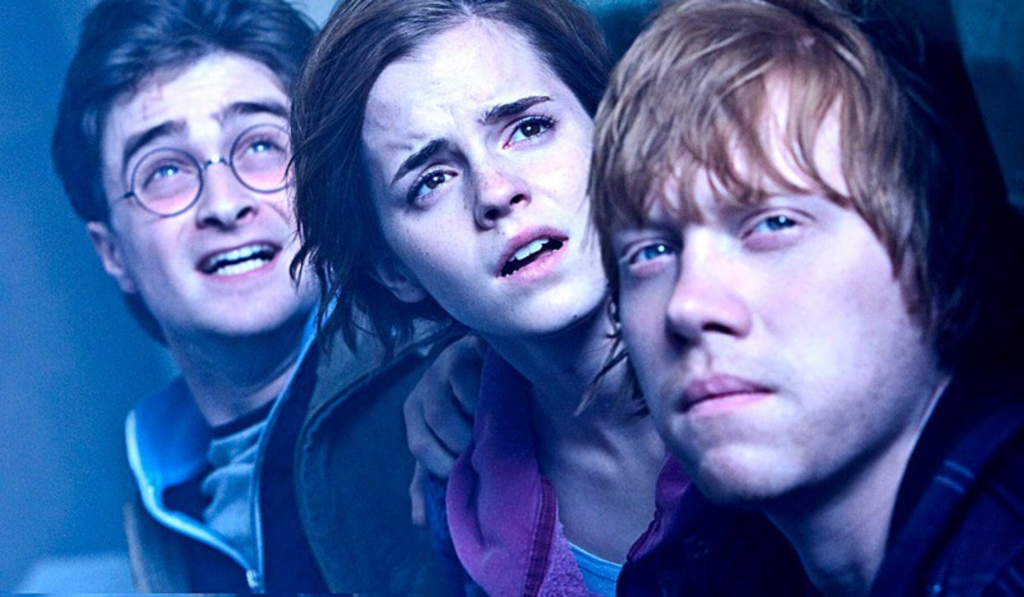 Even people locked in a persistent vegetative state know that late in Harry Potter and the Deathly Hallows, the teenage wizard absorbs a lethal spell cast by evil Lord Voldemort. At that point in J.K. Rowling’s seventh and final Potter novel, the Boy Who Didn’t Die encounters his late mentor, Albus Dumbledore, who offers a warm and tidy explanation of various hows and whys. For maximum box office, Warner Bros. has divided its film adaptation of the book, and in Harry Potter and the Deathly Hallows Part 2, which opens Friday, Harry and Dumbledore speak their last in a Kubrickian, pearlescent limbo.

“Is this real?” Harry asks. “Or has this been happening inside my head?”

“Of course it is happening inside your head, Harry,” Dumbledore answers. “But why on earth should that mean that it is not real?” Then Dumbledore sits down at a gleaming white Steinway and sings “Across the Universe.”

All right, not really. But you can totally picture it.

And that’s not a complaint. Four hours into director David Yates’ brooding, blood-matted finale (thinking of the two films as one helps balance the staring angst that slowed the tentbound Part 1), Dumbledore’s handy moral summation — Voldemort can’t love, so he can’t live; Harry had to be willing to die in order to know love — provides a valuable “oh, riiiiight” moment for the book-dumb moviegoer while cleansing the palate before the furious climax and the cuddly denouement.

Rowling’s saga, especially onscreen, isn’t so much rich as it is dense, all bloodlines and secrets and betrayals. Yet for all that brews in her cauldron of Pidgin-Arthurian names and reflexive storytelling — if Wikipedia didn’t exist, Harry Potter fans would have needed to invent it — what burbles over the top is simple: love and death. It’s an orphan’s story, with loss always in mind and a version of love that’s fraternal and gigglingly presexual. And in its child’s-eye view of shattered family and loyalty always under assault or repair, the shaggy whole of the thing is both critic-proof and honorably level. Rowling’s excruciating commitment to detail invites those dispirited by the finiteness of a mere seven books to resurrect characters themselves rather than live with their grief. Just reread.

The movie cycle works similarly but adds something unexpected and wholly apart from the books. From the entertaining but mechanical first two pictures (directed by Steven Spielberg acolyte Chris Columbus) to the dark and sometimes jolting last four, the theatrical Harry Potter aims for nothing less than English storytelling primacy. What started as a gently Anglophilic Hollywood cash cow has become a full-scale resurgence of British spectacle. No one is going to mistake TV-trained Yates for David Lean — the Lean you find here is more Brief Encounter than Lawrence of Arabia anyway: fugitive romance, life during wartime, tea with milk. Instead, with England, Scotland and Wales as locations and a visual-effects guru (Tim Burke) who doesn’t owe it all to George Lucas, Deathly Hallows Part 2 marches on Henry V territory.

No, this isn’t Shakespeare, but Yates’ and screenwriter Steve Kloves’ telling has its roots in Laurence Olivier’s wartime Henry V, with the Hogwarts School of Witchcraft and Wizardry standing up to a fascist blitz with stiff upper lips and broken wands. (That Kloves is a Texan hardly matters.) This particular blitz is made up of ogres and barbarians and a Death Eater who looks like Adam Ant, all led by Amon Goeth himself — Ralph Fiennes. And it ultimately calls on Harry to save magical England by rejecting English imperialism.

This valedictory Harry Potter also serves as a convincing rebuke to 2011’s box-office champs so far, the third Transformers installment and the fourth Pirates of the Caribbean movie — both vacant, both thoroughly American. At least Harry Potter was a fictional character before he was a toy or a theme park. Less persuasive is Part 2‘s 3-D — given the film’s sepulchral palate, it’s like watching a drive-in movie through an old View-Master. Yates occasionally hurls thrills at the balcony — dragons, snakes, brooms outrunning fire — but it’s these worn-in characters and their often quiet voices that project.

The cast — that British, British cast — has always been what elevated the material past its sometimes muddled metaphors and jumbled mythological syntax. Since 2001’s Harry Potter and the Sorcerer’s Stone, the joke has been that peopling the Potterverse with the U.K.’s most recognizable faces has allowed Fiennes, Maggie Smith, Michael Gambon, Helena Bonham Carter and the peerless Alan Rickman (among others) to buy summer homes. But none of the troupe has phoned in a performance, and the veterans have escorted Daniel Radcliffe (as Harry), Rupert Grint (Ron Weasley) and Emma Watson (Hermione Granger) from the window overlooking awkward adolescence to the red carpet of earned stardom. That alone is more magic than most franchises offer. And if the eight Harry Potter pictures haven’t changed cinema, they’ve done a more honest job than most of delivering movies to an audience eager for story.