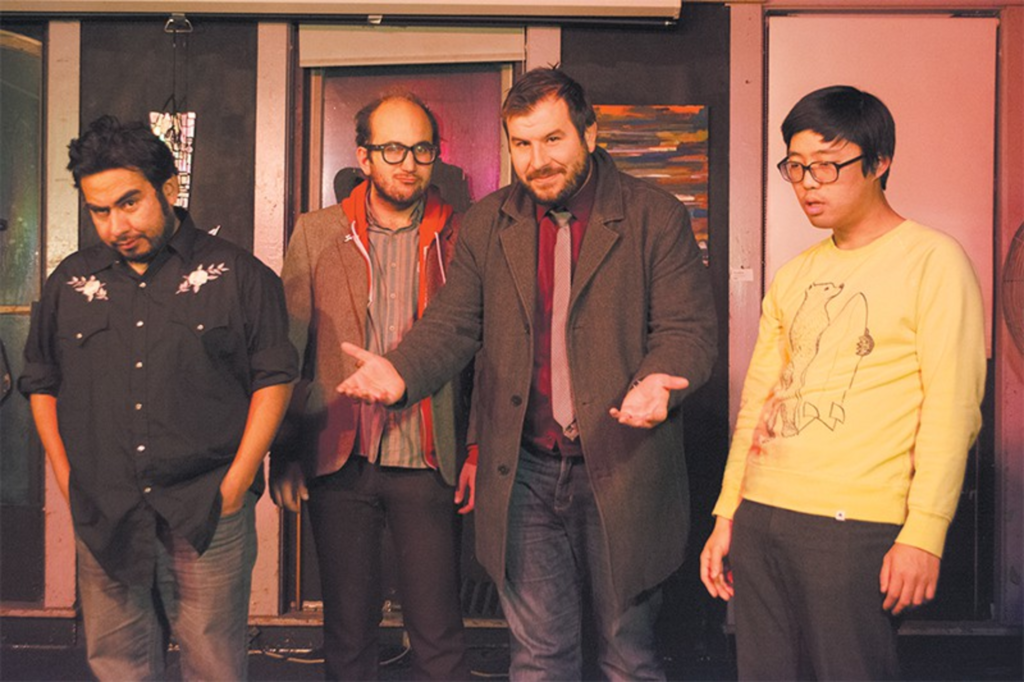 In the basement of a bar in north Lawrence, several dozen 20-somethings clutch cans of cheap domestic beer and watch a man from Nebraska. He is in the middle of what used to be the dance floor, wearing the loudest print shirt ever made and talking about smoking weed with an 80-year-old woman.

He is tonight’s draw at Comedy Freakout, one of the increasingly frequent events presented by Lawrence comedy collective Harpoon Presents. In a short time, Harpoon has gone from a loose coalition of like-minded individuals (who say they came together out of necessity) to an entertainment force in Lawrence — and, starting with a show this weekend, beyond.

Name-brand comedians stop in Lawrence regularly — the University of Kansas’ Student Union Activities has booked Aziz Ansari, the Sklar Brothers and Retta in recent years. But touring comics on their way up have usually bypassed the town in favor of shows at Kansas City’s Improv or Stanford & Sons. Harpoon is changing that, luring figures from the alt-comedy community with bookings that are already outgrowing basements and dive bars.

Harpoon member Peter Lyrene explains that alt comedy draws its own kind of audience because it exists in opposition to what typical comedy clubs do. He names the back room of Pachamamas’ Star Bar as an example. The restaurant was eager to snag Harpoon bills because the group performs and also books outside talent, allowing Pachamamas a new share in a market that’s dominated by music gigs in clubs.

Los Angeles comic Barry Rothbart — touring in support of his new album, Streets of Fire, alongside Kansas City native Danny Solomon — plays Pachamamas and the Riot Room this weekend, thanks to Harpoon. Rothbart explains in a phone interview that he planned this tour with homegrown scenes, such as Harpoon’s, specifically in mind.

“There’s a few things I love about comedy clubs and a few things I don’t,” Rothbart tells The Pitch. “The thing I don’t like is that you don’t really get comedy fans who come out to things. I’ve been trying this new thing recently, where I just do smaller venues so I can promote it and get people who will be fans of comedy and come out — not just people who won tickets from whatever Christmas-party raffle.”

Rothbart adds, “I think that’s way more fun, to just get 100 people to come out who at least like comedy. I think it’d be a way more fun thing.”

Last month, I sat on the deck of an east Lawrence coffee shop with four of the Harpooners: Lyrene, Chance Dibben, Bene Garcia and Zach White. We requisitioned beverages, and they explained how the college town’s comedy scene has evolved over the past couple of years.

The collective’s place on that scene starts with Riptide, which Lyrene described that day as “somewhat of an accidental festival.” Lyrene and Dibben, along with White, found that they had, among them, seven bookings over five days. So they decided to join forces and put a name to it, a name that dated back to 2008, when White and fellow Harpoon member Joe Noh worked together at KJHK 90.7. Their show for the University of Kansas’ student radio station was called Good Evening, but in the process of arriving at that name, they kept coming back to the word harpoon, that vague homonym of lampoon.

“Outside of radio stuff, we had been trying to do podcasts and things, but it kind of fell through,” White said. “But when this thing happened, we needed a name, so we pulled it out of the closet and dusted it off.”

Dibben and Lyrene had put on a series of shows called Comedy Freakout for about a year, in such venues as the basement of Frank’s North Star Tavern, and they were thinking it was time to brand their efforts.

“The need to come together trumped any planning,” Lyrene said of what finally begat Riptide, an event that signaled this town’s appetite for more comedy.

Dibben shared a few theories about why Harpoon is having this moment.

“It’s not loud,” he told me. “It’s cheap. It’s easy. I just think that, Lawrence being an artsy town, and all kinds of people being performers, I think the town just kind of has that mind toward those things, and it just naturally evolves into kind of where it’s at now.”

“It makes for a really cozy atmosphere, and it’s great to have something a little different going on once a week,” Kay writes in an e-mail. “Stand-up comedy really suits our room. I have to say, it’s pretty cool to walk into a roomful of people laughing.”

“Harpoon is about the production, promotion and facilitation of comedy in general,” White told me. And there’s no better example than Garcia. Early on, Garcia started showing up at a regular Sunday-night event called “Who Needs Practice?” at Gaslight Gardens. Now he runs the biggest of Harpoon’s regular events: Joke Fighter.

“With stand-up, it’s always kind of a combative theme, kind of like you versus the crowd,” Garcia says of the three-month competition, which ended in November. “If you do well, then you kill. If you’re bad, you bomb.” Amber Lehman did not bomb; she won top honors: $500 and a spot in an upcoming Harpoon Presents showcase.

“That’s what I think is the best part of doing all this stuff — seeing people get into the grind and get as much stage time as you can and just develop,” White said. “Bene was doing that. Amber’s really doing that. She just started working on it, writing amazing material really consistently. And then she won the frickin’ championship.”

During my conversation with the foursome, Dibben added that Harpoon emphasizes more than competition. They want everyone to get a shot.

“Anybody can do whatever they want to do,” Dibben said, taking a drag off an American Spirit. “Everybody is kind of on their own journey, so we’ve seen people that weren’t so great at their first time out. But they got bit by it and they enjoyed it, and we were there to support them and give them the space, and they are now our rivals and must be destroyed.”

Dibben got a big laugh of his own with that, but he was quick to offer assurances of his sincerity: “That really is the coolest thing, to see people that normally we wouldn’t have known come in, do one of the nights that we’re doing, and just keep killing it and doing better and better.”

As Garcia puts it, “There’s talent here [in Lawrence] — we don’t need to import. There’s funny things here and funny people here that people should be aware of.”

For Harpoon, it’s not so much a case of import versus export but rather the idea of making Lawrence a must-play stop on comedians’ tours.

“It’s about letting people know that there are places between Chicago and Denver where you can get a good crowd and have a good time,” White said. One such place, Stanford’s, was closed for the majority of the summer, allowing Harpoon to attract acts that otherwise might have played Kansas City.

“We don’t have the resources,” White said. “They can afford to pay these comedians more because they have food and booze money that they can throw at that. But I think we have a better time. People are going to have more fun.”

He went on, “Our main goal is to support comedy. We’re going out to other shows. We’ve collaborated with Card Table on Massholes, a local Lawrence game show.”

Lyrene interrupted: “I don’t think any of us can pinpoint exactly when we were bit by this bug, but we all have a weird, compulsive need to be doing this. We’ve seen the scene grow from just the few of us doing it, two years ago, to many more people, to where it’s a waiting game. So, on a long bill or an open mic — as far as the competitive nature or sportification — you wait your turn.”

“Competition is more of ‘Oh, that’s amazing!’ and now we have to try harder,” White said. “I just love that, before … there was only one weekly thing and maybe six things a month, and now there’s stuff five nights a week, and that’s awesome.”

Harpoon has about a dozen events planned for the next month, mostly in their usual Lawrence venues but also at such places as the Union of Westport. With that kind of reach, Garcia wonders how many more people will feel the bite.

“If you’re genuine and you show up and can rock the mic and you’re funny,” he says, “more than likely, we’re going to find a spot for you.”